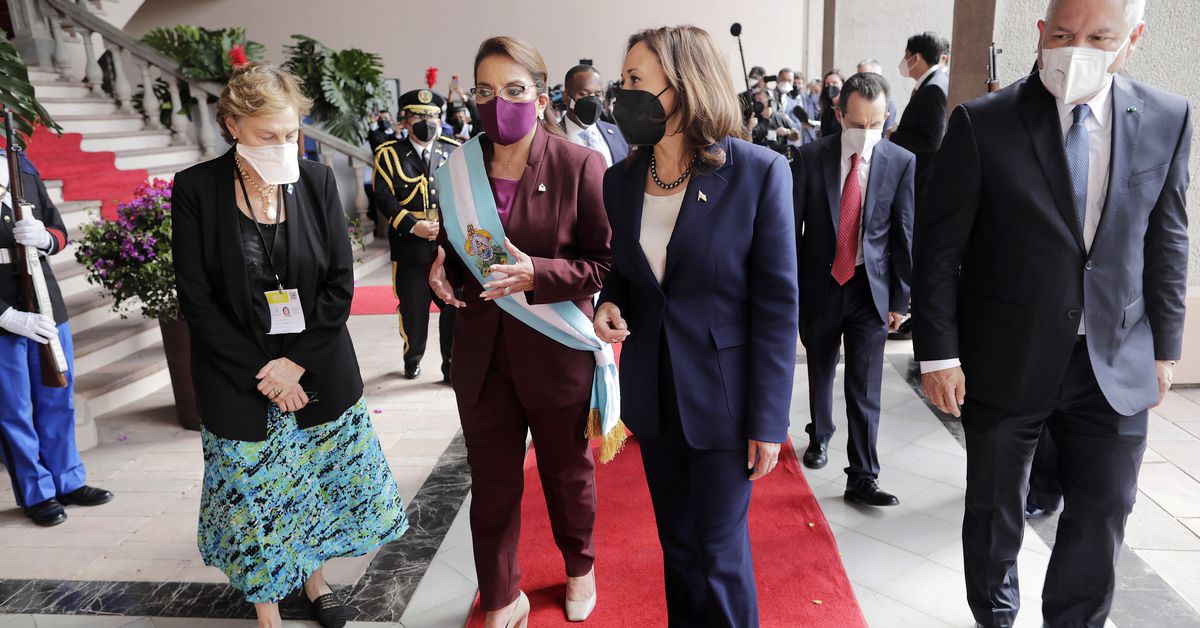 Harris’s attendance wasn’t just a show of solidarity with Castro’s agenda — it was meant to signal a new era of US-Honduras relations, one in which American leaders work alongside Honduran officials to reduce northern migration.

Partnering with Castro might not yield as much progress as the Biden administration hopes. Castro’s agenda is ambitious. She’s promised to address endemic corruption and a lack of economic opportunity in one of the poorest countries in Latin America, a place where more than half of the citizens have expressed a desire to leave.

Realizing that migration doesn’t start at the US-Mexico border, the Biden administration has looked for ways to give migrants a reason to stay in their home countries.

But there is an ongoing leadership struggle in the Honduran Congress threatening her mandate and US interests in the country. A rival faction of Castro’s party is trying to replace her de ella pick de ella to lead the Congress. If that faction succeeds, it could effectively kneecap Castro’s agenda along with the Biden administration’s efforts to address the root causes of migration from the country and others in the Northern Triangle.

“[The fight over who’ll lead Congress] makes people wonder who’s in charge. It raises questions about to what extent the government is committed to the rule of law and to separation of powers. It cuts confidence. It creates a wait-and-see attitude on the part of anybody who would spend money to create a business or to invest, or to help Honduras with assistance,” Lisa Kubiske, the US ambassador to Honduras from 2011 to 2014, said in a press call.

Honduras is in a tenuous political moment. It has operated as a narco-state under the right-wing National Party since 2009 when a military coup ousted then-President Manuel Zelaya, Castro’s husband. Persistent corruption, weak government institutions, climate change, high levels of violent crime, and rampant poverty have driven hundreds of thousands to flee the country in recent years, with many Hondurans seeking asylum in the US.

Change seemed to be on the horizon last November. Voters turned out in droves to elect Castro in a landslide win against the National Party’s Nasry Asfura — an ally of the outgoing president, Juan Orlando Hernández, who has been accused of taking bribes from narcotraffickers. Castro promised to create a coalition government to bring together the National Party’s political opponents, including her own center-left Libre party, under an agenda of combating corruption and promoting economic development.

As part of a joint initiative with the US government, American companies pledged to inject more than a combined $1.2 billion over a multiyear horizon into Honduras, El Salvador, and Guatemala. Those funds were meant to help reduce migration by providing new economic opportunity in the region. In Honduras, Castro’s incoming administration was seen as a reliable partner that could ensure the investments worked as intended.

That approach isn’t entirely new; then-Vice President Joe Biden pursued similar economic development programs in the region under the Obama administration. But it’s a marked shift from the Trump administration’s strategy of slashing aid to Northern Triangle countries and forcing migrants to apply for asylum in those countries before they can do so in the US.

In her meeting with Castro last week, Harris expanded on the Biden administration’s existing economic development plans, committing to sending a senior-level trade mission and business delegation led by the Department of Commerce to generate business opportunities in Honduras. Harris also emphasized that Castro’s election signaled an opportunity to advance shared interests.

“Our perspective as the United States, in terms of our relationship with Honduras, is one that we believe our nations, as are most nations these days, [are] interconnected and interdependent,” Harris told Castro in their meeting. “I look forward to many areas of partnership, including the work that we can do to address the economic prosperity of Honduras.”

But Castro will be in no position to help advance shared interests if she can’t unify her government, and her ability to do so remains in question.

Castro’s proposed reforms could be transformative for Honduras, a country where corrupt economic elites have long ruled. She has vowed to institute an anti-corruption commission backed by the United Nations, similar to one that was shut down in Guatemala in 2019, and to agree to a National Assembly seeking to rewrite the country’s constitution to guarantee social democratic rights. And she has promised a “new economic model” that would reduce inequality and the cost of living and would involve building an environment more conducive to private investment.

But the future of that agenda is in flux due to a constitutional crisis wracking the Honduran Congress.

A group of 18 newly elected Libre party lawmakers recently challenged Castro’s decision to install Luís Redondo, a member of the centrist Savior Party of Honduras, as congressional leader. They argue that a member of the Libre party — which has 50 lawmakers in the 128-seat Congress, compared to the Savior Party’s 10 — should instead hold that title. These 18 Libre lawmakers did not attend a meeting of the Congress in which Redondo was elected leader; instead, they gathered separately at a private venue to elect their own rival leader, Jorge Cálix, with support from the opposing National Party.

Castro saw it as a “betrayal” and expelled the rebel lawmakers from his party. The National Party has offered to take them in, which would give it the highest number of lawmakers in Congress and effective control over the congressional agenda.

The leadership crisis remains unresolved and is now before the Honduran Supreme Court, where the odds don’t seem to be in Castro’s favor. Four of the five judges who will be deciding the case were appointed under the previous Congress, where the National Party held the majority. Should Cálix prevail, he could torpedo Castro’s agenda, as Honduran congressional leaders have the power to prevent her political initiatives from even being considered.

Foreign policy experts have speculated that the rebel lawmakers were operating under the influence of the outgoing Hernández administration and his National Party allies, who hope to regain power and hamper reform. It’s not clear whether they would suffer any consequences. As of now, however, there’s no concrete proof that this is the case.

The US isn’t intervening in Honduras’s congressional fight. A senior administration official told reporters last week that it is up to Hondurans to reach a resolution in a way that is consistent with their constitution and laws.

As the US waits, Hondurans will also need to wait for the reforms they voted for. That means already low confidence in government might continue to plummet and support for a military coup could remain high. Poverty and lack of stable employment and educational opportunities could persist without a robust social safety net. Corrupt elites could continue to evade taxes and exploit their workers. These sorts of issues have driven more than 680,000 Hondurans to the US in the past 3.5 years. If Cálix remains the head of Congress and Castro can’t institute her reforms, the US will have to find other ways to pursue its goals in the country, including via the private sector investment it is already pursuing.

That investment is not a quick fix. It’s set to come in tranches, so even if it reduces migration, it may be years before its effects are seen. And that assumes the companies follow through on their pledges. Profit might motivate those companies to continue investing in the region, regardless of how Honduras’s political situation resolves itself. But if profits aren’t good, the companies are likely to pull their investments — and, continued political instability in Honduras could scare away future investors.

The US does have some other options. It could also work with civil society groups and withhold foreign aid if there isn’t marked progress on anti-corruption efforts, as a means of putting pressure on the Honduran government, the senior administration official said.

Still, it would be a lot easier to pursue that agenda with buy-in from the Honduran government. For now, though, the Biden administration is asking for patience.