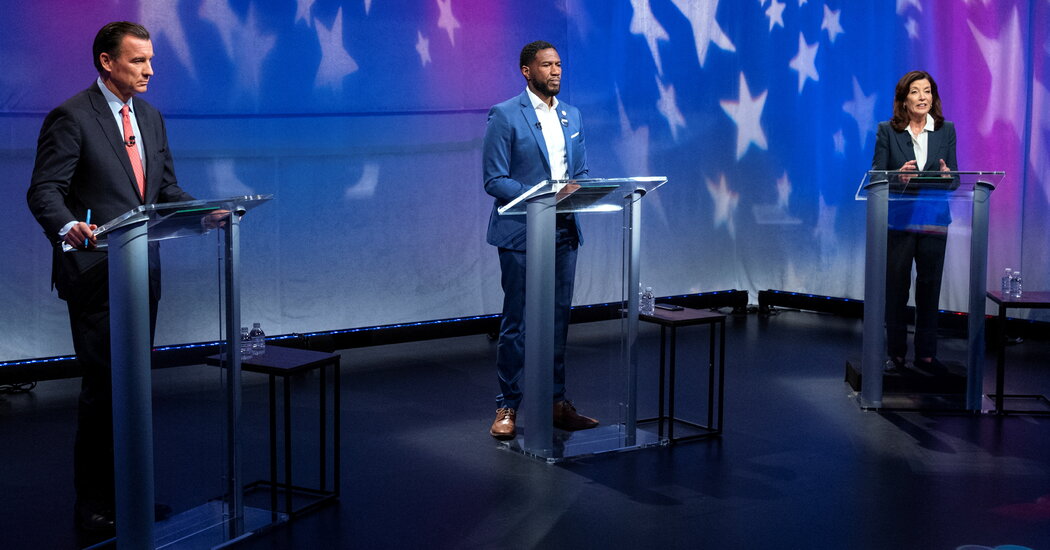 The stakes in Thursday’s Democratic debate for governor of New York State were relatively low for Gov. Kathy Hochul, the race’s front-runner. She had to withstand an onslaught of attacks from her rival candidates, while making no major errors. She appeared to achieve those modest aims.

The stakes for her two rivals, on the other hand, were substantially higher. Early voting for the June 28 primary begins Saturday, and this was one of her last opportunities to change the trajectory of a race that appears all but certain to award her the nomination.

They attacked the governor’s record on crime, aid for undocumented immigrants, the environment, and affordable housing.

And they frequently touched on real sore spots for the Hochul campaign.

Ms. Hochul did align herself with the National Rifle Association when it was politically advantageous, before turning against it. She did use state funds to finance a new Buffalo Bills stadium in a deal that sports economists describe as flawed, and she did choose a less-than-ideal lieutenant governor in Brian A. Benjamin, who had to step down to fight federal corruption charges .

But Ms. Hochul is a formidable fund-raiser wielding the powers of incumbency. She has nearly a year in office and a $220 billion budget under her belt to defend against attacks from her opponents.

Here’s a recap of some of the most memorable moments of the debate.

Ms. Hochul’s first days as governor were punctuated by the remnants of Hurricane Ida, which caused severe flooding that killed at least 13 New York City residents, many in their basements.

On Thursday, the debate moderators asked her and her Democratic competitors what they were doing to combat climate change, which is expected to make future hurricanes more devastating.

The governor pointed to her support for a $4.2 billion environmental bond act, which will go before voters in November and, if passed, will help finance climate-related infrastructure.

But Mr. Williams quickly pointed out that on some other climate-related measures, Ms. Hochul has seemed more equivocal.

During a debate last week, Ms. Hochul said that the state’s long-delayed congestion pricing plan for New York City was “not going to happen over the next year under any circumstances.”

The plan would demand a toll of drivers entering Manhattan’s central business district, and is expected to reduce traffic and the pollution that comes with it. Ms. Hochul blamed the federal government for the delays.

Following her remarks last week, the Metropolitan Transportation Authority she controls issued a statement asserting it was moving full-speed ahead on congestion pricing, and Ms. Hochul hewed to that line on Thursday.

But Mr. Williams attacked her on another climate-related front, too. Ms. Hochul has yet to sign legislation that would institute a two-year moratorium on a particularly energy-intensive form of cryptocurrency mining.

A super PAC backed by a cryptocurrency billionaire is also supporting her running mate’s bid for lieutenant governor.

Conflicting views on how to address the housing crisis

Each of the three candidates on the debate stage agreed that the housing crisis was a major problem facing New Yorkers — but the question of how to solve it opened the first three-way spat of the night.

Ms. Hochul pointed to the steps already underway — from a recently signed bill that would convert distressed hotels into housing, to a plan to build 100,000 new affordable units, to a new funding stream for New York’s beleaguered public housing stock — as proof that she has the issue under control.

Ms. Hochul also mentioned her rental program, which the state contributed $800 million to in its last budget, and which she described as a “short-term solution,” to help with assistance housing and utility costs during the pandemic.

Mr. Suozzi agreed that the city’s public housing needed support, and new affordable housing ought to be built. I have suggested that there should be a replacement for 421a, a section in the tax law that offered developers tax relief in exchange for creating affordable units. It has just expired; Ms. Hochul tried to replace it in the last legislative session, but lawmakers balked, calling it a giveaway to real estate.

But more broadly Mr. Suozzi knocked the governor for what he described as her “irresponsible” use of federal funds. “We already have the highest taxes in the United States of America. When a downturn comes, we’re going to be in a lot of trouble because of the irresponsible spending by this governor,” he said.

Mr. Williams, for his part, said that the state needed to build many times the number of affordable units suggested by Ms. Hochul, and to pass “Good Cause” eviction legislation, which would make it more difficult for landlords to remove tenants from their homes. Neither Mr. Suozzi nor Ms. Hochul said that they would support such legislation.

“The real estate industry dumps millions of dollars to buy policy that has you facing eviction,” Mr. Williams said directly to the camera.

One of the more contentious moments of the evening involved Mr. Suozzi’s attacks on Ms. Hochul’s record on gun control.

After her 2011 election to Congress, where she represented an upstate district, Ms. Hochul got an “A” rating from the National Rifle Association, and the organization endorsed her in 2012 against a Republican opponent.

She has since become an ardent proponent of gun control. Mr. Suozzi cast her de ella evolution de ella as hypocrisy.

When Ms. Hochul tried to respond to Mr. Suozzi’s argument, he interrupted her twice.

It was not the only time Mr. Suozzi spoke over Ms. Hochul. A short while later, Ms. Hochul was trying to respond to a question about elementary school curriculums dealing with sexual orientation and gender identity.

“Excuse me, I’m giving an answer,” she said.

“I will answer the moderator,” she responded.

The fight over ‘Don’t Say Gay’ comes to New York

Across the country, parents have moved to scrub public school curricula of the history of racism, as well as of information on gender and sexuality.

Most recently, Gov. Ron DeSantis of Florida trumpeted a law — known to detractors as the “Don’t Say Gay” bill — that bars teachers from sharing lessons on LGBTQ history or gender identity with children before the fourth grade.

Mr. Suozzi drew controversy in April when he said that he found the law to be reasonable. Though he later recanted, he said Thursday night that he wouldn’t teach children “about sexual orientation or about genitalia or about sexuality” before the fifth grade. “I think that’s up to parents to do that,” he said.

Ms. Hochul attempted to seize on Mr. Suozzi’s comments, which she said were “discriminatory.” But when asked whether she would support a mandate for a curriculum in elementary school, Ms. Hochul demurred, saying that such a decision should be made in conjunction with teachers, school boards and parents.

Mr. Williams, who has in the past drawn criticism for his own stance on LGBTQ issues, said that he would support such a curriculum, so long as it was taught so that young people could understand it. He later suggested that such education could also help children seek help for sexual abuse.

Agreement on tackling crime, but not on how to do it

New York City has seen an uptick in certain violent crimes and on Thursday, Mr. Suozzi blamed neither the pandemic, nor the economy, nor Mayor Eric Adams. I blamed Ms. Hochul.

A recent Siena poll found that 70 percent of New York City residents feel less safe today than they did before the pandemic.

Mr. Suozzi has made crime central to his campaign for governor. He routinely argues that the state needs to pass laws that keep criminals in jail longer, and casts himself as a proven executive capable of doing so. He says that as governor, he would remove district attorneys who fail to enforce state law.

So when the question turned to subway crime, and Ms. Hochul started explaining her joint city-state effort to combat it, Mr. Suozzi attacked.

“People are not safer,” he said. “Under this administration, they are not safer. They don’t feel safe. And the governor has not made crime a priority.”

Mr. Williams agreed that safety was of critical importance to the city, acknowledging that as a new father he worried about his daughter taking the subway.

Instead of seeking to add police officers, however, Mr. Williams said that the state should invest in housing, mental health, and “responsible” policing to create what he has called a “holistic” approach to public safety.