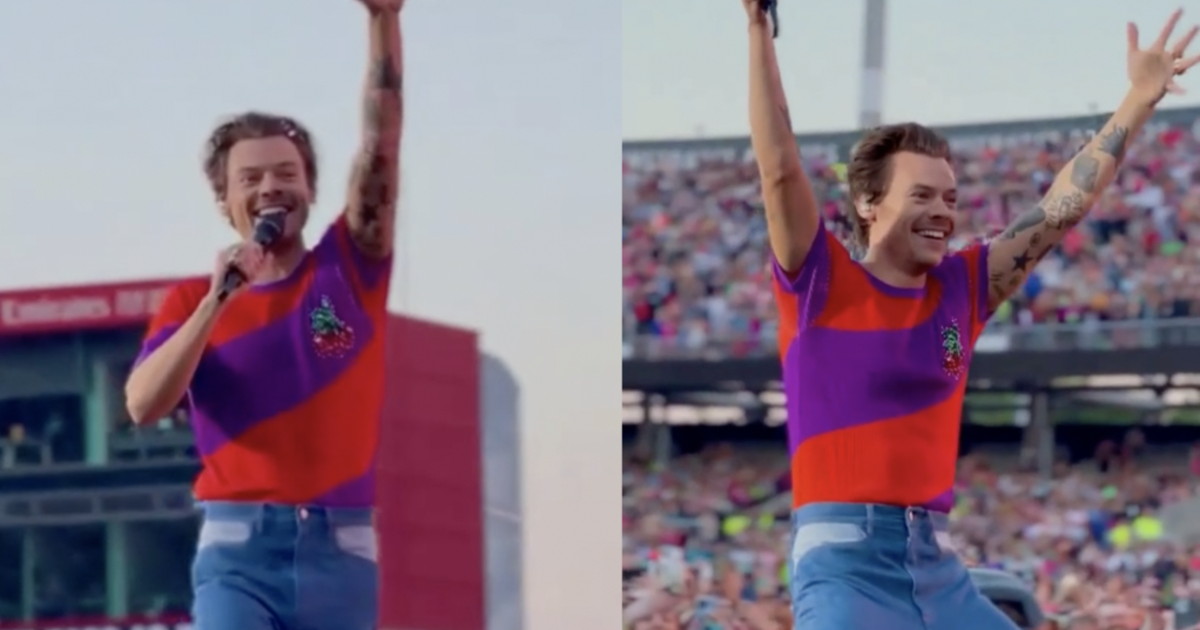 Harry Styles paused a concert in Manchester, UK on Thursday night, asking fans to be momentarily quiet. “I’m going to ask a favor from you because I’d like to try and find someone in the audience,” he said.

It was his “first ever school teacher,” named Ann Vernon. Styles said he believed she was in the crowd and asked the audience to help him out. He was performing at Emirates Old Trafford stadium – which holds 26,000 people – but within seconds, he spotted her.

“There she is. Mrs. Vernon!” Styles said, falling to his knees as fans cheered. “How are you? I heard you’re retiring. I’d just like to thank you for everything in those formative years. And yeah, thank you so much, it means a lot to me that you’re here tonight.”

“Can you imagine dealing with me when I was 4?” Styles said. He said he was dedicating his next song to Vernon, then played his song “Canyon Moon,” Manchester Evening News reports.

Styles grew up in nearby Cheshire, UK A fan in the crowd filmed the sweet moment and posted part of the exchange on TikTok, where it went viral.

“I taught him when he was four and five and he was adorable. He was a little bit of a monkey, cheeky, and he had lots of friends so a lot of his personality that you see now was quite evident from an early age, ” Vernon told the “The Zoe Ball Breakfast Show” on BBC Radio 2 after the concert.

She said Styles was in a lot of performances growing up and he was very talented. “But yeah, in everything he was amazing, all the teachers here are just so proud of him and so excited about this and everything that he’s achieved,” she said. “Thank you Harry for that lovely message, I was very touched by it.”

This was just the second stop on Styles’ 2022 tour. the singer has partnered with Everytown for Gun Safety for the North American portion of his tour. Following one of the deadliest mass shootings in American history in Uvalde, Texas, Styles pledged to donate to the nonprofit organization and share “their suggested action items.”

Caitlin O’Kane is a digital content producer covering trending stories for CBS News and its good news brand, The Uplift.