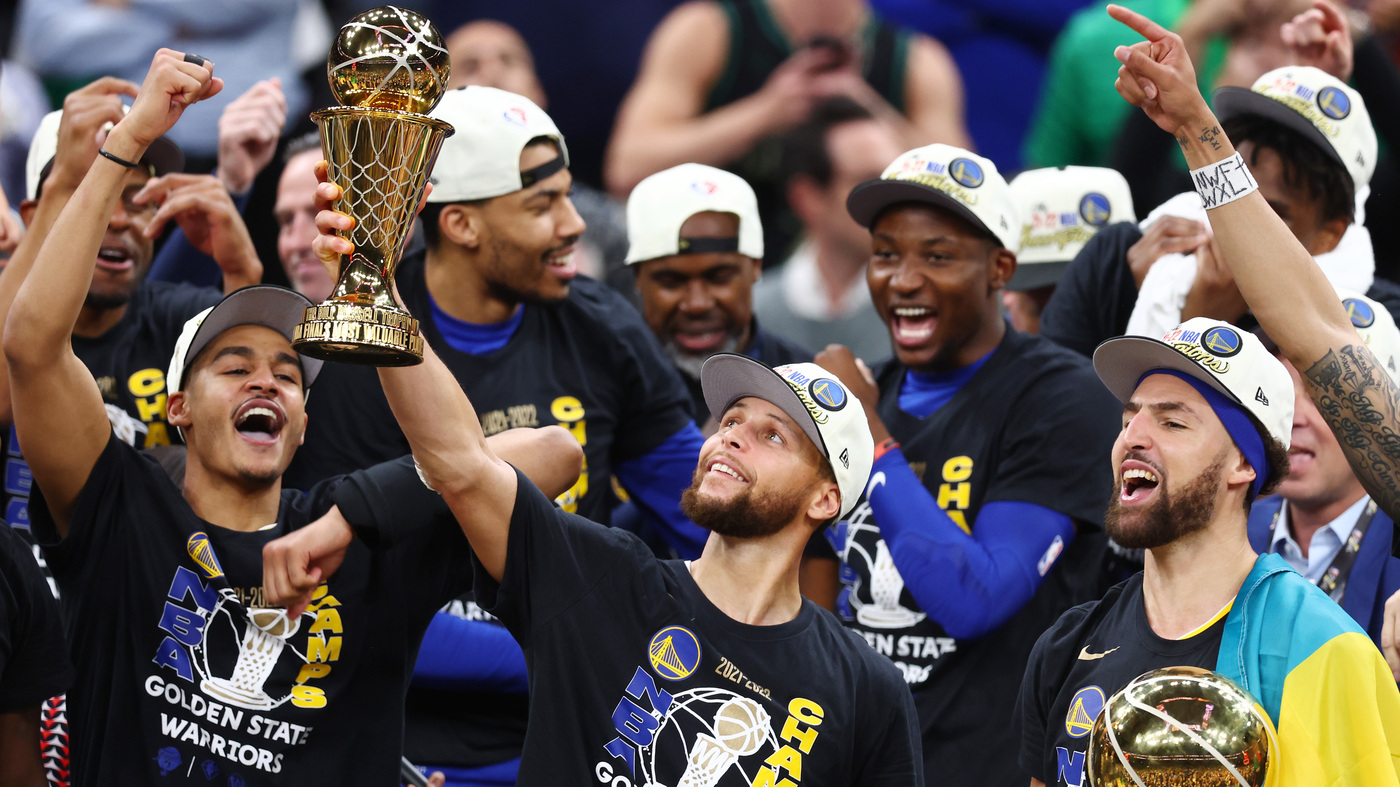 Stephen Curry raises the NBA Finals Most Valuable Player Award after the Golden State Warriors defeated the Boston Celtics 103-90 in Game 6 of the 2022 NBA Finals on June 16, 2022 in Boston.

Stephen Curry raises the NBA Finals Most Valuable Player Award after the Golden State Warriors defeated the Boston Celtics 103-90 in Game 6 of the 2022 NBA Finals on June 16, 2022 in Boston.

The Golden State Warriors clinched the team’s fourth NBA title in eight years Thursday night, decisively defeating the Boston Celtics on the road, 103-90, to win the seven-game championship series, 4-2. It was the franchise’s seventh overall title.

Stephen Curry scored 34 points for Golden State and earned the series Most Valuable Player award, the first time he won the honor. Curry was joined by veterans Klay Thompson, Draymond Green and Andre Iguodala in winning their fourth championship with Golden State.

“We had to take advantage of the opportunity to get back here,” Curry said after the game. “We found a way to just get it done. At the beginning of the season, we weren’t even on the radar.”

Golden State’s championship came after the team rallied from being down in the series 2-1.

“They had us on the ropes in this series,” Golden State coach Steve Kerr said, acknowledging how difficult it is to come up short in a finals. During Kerr’s coaching tenure the Warriors have lost two NBA Finals series.

“It’s devastating to get this far and come up short.”

The first three NBA title rings for Curry, Thompson, Green and Iguodala came in 2015, 2017 and 2018, when Golden State made five consecutive trips to the finals. But the team then fell to the bottom of the league, due to injuries and departures of players. The team’s title came just two years after it recorded the league’s worst record.

The Warriors were 15-50 in 2019-20. The franchise became the first NBA team to go from the worst record to a championship in a three-season span, according to ESPN.

This season was a mixture of both optimism and uncertainty for the Warriors, with questions about whether the team could return to greatness. But the team began the season winning 18 of its first 20 games. Curry set an NBA career record for 3-pointers.

Green, the Warriors forward, may have best expressed the happiness the team and its fans enjoyed after reclaiming the NBA’s championship: “Welcome back to the Warriors Invitational, baby!”