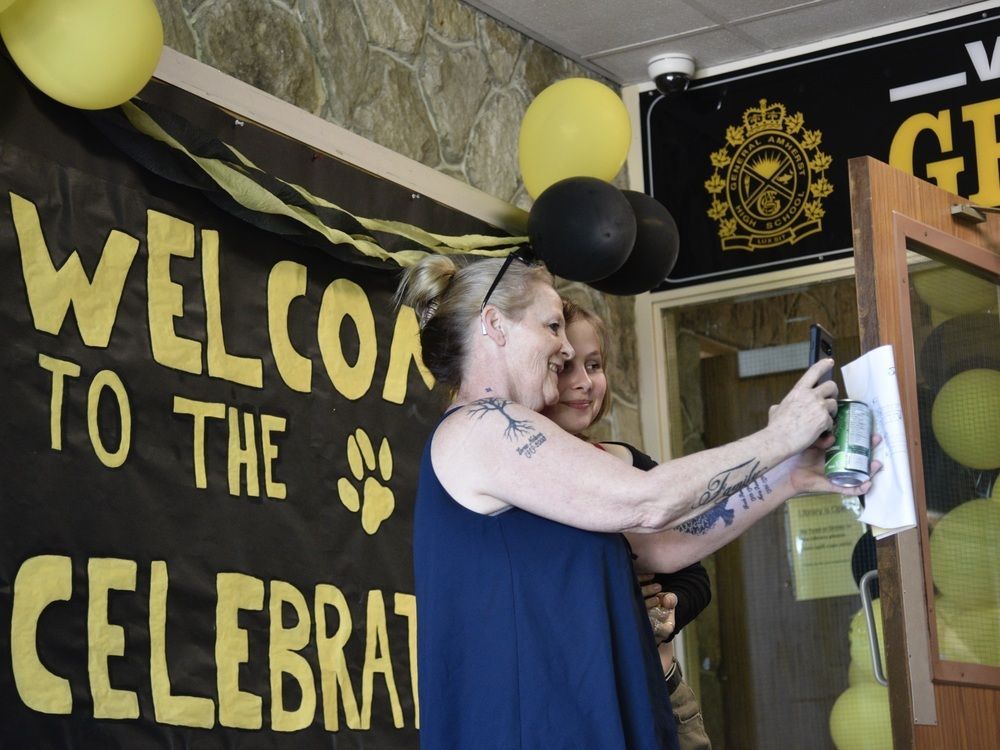 It was an afternoon full of laughter and old memories, as the community and alumni of General Amherst High School bid the old building farewell.

The 100-year-old school marked its anniversary on Saturday, even as it will close its doors in a few short weeks. Next year students will attend the new North Star High School — but before General Amherst is officially closed, a goodbye was in order.

“We’re inviting staff, students, alumni — anyone who had a connection to the school — to come out, learn more about the history of the school and tour for the final time,” said Linden Crain, one of the organizers behind Saturday’s open house.

Leaving the school with more memories. Sometimes you forget the great things that happen in high school, and walking the hallways you’re able to reminisce and reflect on your high school days. We hope for a sense of community.”

Throughout the afternoon thousands of people walked the sprawling school and its many facilities, from the athletic center to the science labs. Organizers, students and volunteers put together displays of school memorabilia from decades past, with live music, food truck and face painting on the grounds of the school.

For many, coming back to their old stomping grounds brought back fond memories.

“It’s really nice,” said David Cozens, who graduated from General Amherst in 1969. His father, Reg Cozens, was also the school principal for years. “I ran into someone I haven’t seen in 30 years.”

It was news to many former General Amherst students used to have a functioning firing range in the school’s basement, often used by local cadets until it was decommissioned in the 1960s.

“We used to, as part of our cadet training, come down here and shoot,” said Don Skeates, a graduate in 1959. “We’d lay across the bench here and we’d shoot. Depending on your score you’d get a badge called cross rifles.”

Touring rooms filled with memorabilia, former student Helen Hayward spotted herself in a class picture from 1960, the year she started at General Amherst.

“It’s been so many years, so much has happened,” Hayward said. “I’m amazed I can remember so much. We had great teachers and I still keep in touch with some of (these) girls.”

“Its really touching the way they’ve worked so hard to put this together.”