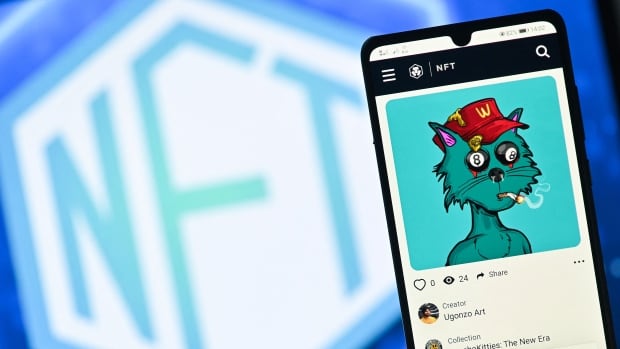 With sales reaching an estimated $17.6 billion US in 2021, there has been no shortage of people and businesses looking to capitalize on the rise of non-fungible tokens (NFTs).

And fraudsters are no exception.

An NFT is a digital asset, typically a piece of art, secured through the blockchain, the same technology that underpins cryptocurrencies like bitcoin.

The price of an NFT is largely driven by investor sentiment — many are regarded as worthless, but some have commanded huge prices, such as Everydays—The First 5000 Daysby artist Beeple, which sold for more than $69 million US in March 2021.

Christie’s is proud to offer “Everydays – The First 5000 Days” by @beeple as the first purely digital work of art ever offered by a major auction house. Bidding will be open from Feb 25-Mar 11.

Ownership of an NFT is meant to be undisputed, as the blockchain acts as a digital ledger that records and verifies every sale and purchase. Yet despite being encrypted, NFTs are not totally safe, and 2022 has already seen its share of high-profile heists.

In February, hackers launched a phishing attack on users of OpenSea, the world’s largest NFT marketplace. The hackers targeted high-value tokens, including NFTs from the viral collection Bored Ape Yacht Club. Estimates put the total value of NFTs stolen in that breach at around $1.7 million US.

Such big scores are likely to continue as scam artists exploit the lack of regulation and mania behind the digital art movement to rip off unsuspecting buyers. Indeed, the anonymous nature of many NFT projects leaves victims with little recourse.

While there are countless ways to lose money investing in new and volatile assets, experts say many of the outright frauds in the NFT sector fall into one of the following categories.

Rug pulls are a form of scam where a fraudulent NFT project is promoted, usually via paid advertising and social media. The project promises exciting content and incredible returns for investors. After the hype reaches a fever pitch and investor money pours in, the scammers delete any social media accounts and abandon the project.

It’s a scam that Marco Monardo is sadly familiar with. When the Oakville, Ont., resident discovered crypto project Frosties NFT in December 2021, he thought he had hit the jackpot.

“I just thought it would be a quick way to get money,” Monardo said. “I would just buy this picture and someone’s going to pay more for it a few months from now.”

The project was based around selling NFTs of “Frosties,” which are cartoon characters that look like ice cream scoops. But the main reason investors were interested were the updates and perks the creators promised post-release, including giveaways and a planned Frosties world in the virtual space known as the metaverse.

After talking to investors through the project’s account on messaging platform Discord, Monardo was convinced and invested $500.

“Their site was very professional,” he said. “Their Discord…had a bunch of members and [they had] thousands of followers on Twitter.”

In the week leading up to the release, the Frosties creators gave constant updates, pleading a successful launch and the new additions down the road, including the planned metaverse game. They only made good on the first promise.

“A few hours go by, everything sells out, this is looking good,” Monardo said. “And then the site just stopped, their Twitter went down and they just kind of stopped all communication — and then everyone just kind of assumed we all got scammed.”

In total, the Frosties NFT rug pull cheated its investors out of more than $1.1 million US. Rug pulls like this accounted for almost 40 per cent of revenue produced by crypto scams in 2021.

Much like in the fine art market, buyers of NFTs have to sniff out counterfeits and plagiarized works from the genuine masterpieces. A good fine art forgery can be expensive and hard to produce, but counterfeit NFTs can be created with the click of a button.

The problem has gotten so bad that NFT marketplace OpenSea had to put strict controls on users’ ability to list NFTs for free, noting that 80 per cent of listings were plagiarized, fake collections or spam.

However, we’ve recently seen misuse of this feature increase exponentially.
Over 80% of the items created with this tool were plagiarized works, fake collections, and spam.

This has also become a major problem for digital artists who routinely have their work stolen. Plagiarists patrol Instagram and Twitter looking for digital art creators, and once they find a popular piece, copy it and list it on NFT marketplaces.

Not only does the buyer receive a counterfeit product, but the artist misses out on the revenue generated from the sale of the NFT.

A staple stock market scam, pump-and-dump schemes are equally prominent in the crypto universe. The premise is simple: a scammer buys an often-obscure crypto token or NFT collection and hypes it up to raise the price, after which they sell their stake, leaving other investors holding the bag when the price drops.

In January, a class-action lawsuit was filed against reality star Kim Kardashian and boxer Floyd Mayweather over their involvement in pumping crypto token EthereumMax. Kardashian and Mayweather promoted the coin on social media and Mayweather made it the official crypto sponsor of his highly anticipated boxing match with influencer Logan Paul in June 2021.

Boosted by endorsements, the token shot up 1,300 per cent in value, at which point the lawsuit alleges EthereumMax executives cashed out, unloading their sizeable positions.

The price of EthereumMax has since plummeted, losing 99 per cent of its value, leaving investors who bought into the hype with a nearly worthless token.

Maria Paula Fernandez, the co-founder of JPG Protocol, an organization dedicated to curating the NFT space, believes crypto scams are unavoidable due to the high volume of projects being released daily.

“The rule of thumb is, if something looks too good, you should probably stay out of it,” she said. “Pump-and-dumps are unavoidable.”

Fernandez cautions buyers to be wary of NFTs with anonymous development teams and instead look for projects with creators that have a history of honest work. She also recommends avoiding crypto projects that have unrealistic goals and promise investors crazy returns.

Despite the risks, Fernandez believes NFTs can be worthwhile investments.

“I think some of them are excellent,” she said. “I think they are both fantastic cultural instruments as well as financial instruments.”

Fernandez believes the technology behind NFTs will continue to evolve, leading to safer transactions for collectors and a higher regard for NFTs as a store of value, to the point where they can be used as collateral for loans.

But for now, NFTs remain highly speculative and there are signs the market is weakening significantly.

According to data resource website NonFungible, NFT sales volumes have plummeted 50 per cent in the first quarter of 2022. The average price of an NFT has also fallen to around $2,500 US, down from $6,800 in January. As a result of waning demand, many NFT owners are finding their prized works are now commanding significantly smaller price tags.

In March 2021, crypto entrepreneur Sina Estavi purchased an NFT of former Twitter CEO Jack Dorsey’s first tweet for $2.9 million US. In April 2022, Estavi attempted to auction the same NFT for $48 million, pledging 50 per cent of the proceeds to charity.

When the auction closed on April 13, Estavi had received just seven bids. The highest bid was a mere $280, representing a 99 per cent loss in value.

I decided to sell this NFT ( the world’s first ever tweet ) and donate 50% of the proceeds ($25 million or more ) to the charity @GiveDirectly
‌‌‌‌‌‌
🖇 https://t.co/cnv5rtAEBQ pic.twitter.com/yiaZjJt1p0

Situations like this are not uncommon, given that the value of an NFT is entirely driven by investor sentiment. For this reason, Fernandez recommends looking at NFTs with a long-term focus and avoiding trying to flip them to make a quick buck.

“It’s best to be cautious — try and invest in an NFT that you believe has true potential,” Fernandez said. “Stay away from flipping. There is some amazing technology being built, but it won’t keep up with the pace of flipping.”

For investors who stay disciplined and patient, there could be big rewards ahead in the NFT space. But to buyers that have already gotten burned, it may not be worth the risk.

“I haven’t looked at any [NFTs] at all since Frosties,” Monardo said. “I guess I would want more of a guarantee that my money would be safe, but you can’t really trust anybody with that stuff. Not for me, at least.”