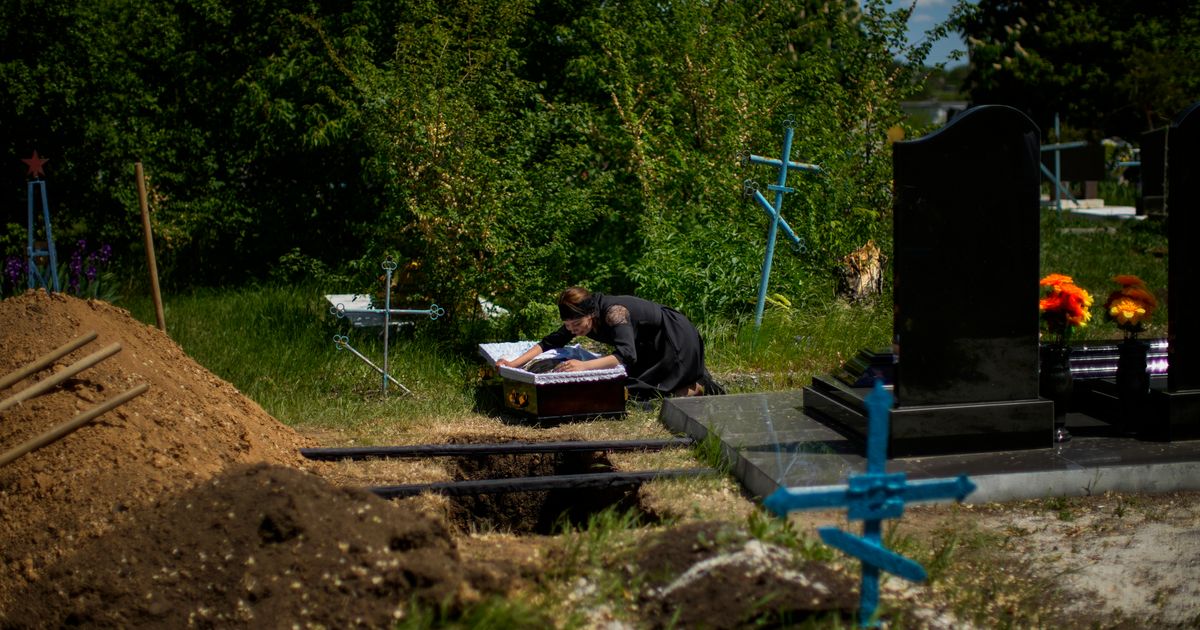 ZORYA TRUDA, Ukraine (AP) — The countryside was in full bloom when Iuliia Loseva buried her husband in the village cemetery near her home. On her knees in the grass, she bowed her head over the open coffin and kissed him one last goodbye before they lowered him into his grave.

There was a military band, and a six-gun salute. His teenage sons of him, pale and stunned, walked behind their father’s coffin holding framed photographs of him in his camouflage uniform.

But this was not a military funeral for a career soldier. Volodymyr Losev’s foray into the army was as sudden as it was brief.

A little over three months ago the 38-year-old was just another civilian, driving trucks and operating cranes, working to take care of his family in a small village near the port city of Odesa in southwestern Ukraine.

Then the war came, and everything changed.

“He had never been in the army, but he signed up on the first day of the war,” said Losev’s brother-in-law, Viktor Chesolin after the funeral.

Russia invaded Ukraine on Feb. 24. Like so many other Ukrainian men, Losev decided he wanted to help defend his country. He had no prior military experience. But he knew how to shoot an air rifle, and he had specialized driving skills due to his job, Chesolin said.

So when a letter arrived from the army recruitment center in February, Losev turned up and asked to be enlisted. Skilled drivers were in demand, and the army took him up on his offer from him.

He left his wife and sons — 13-year-old Hrehorii and 15-year-old Denys — at home and headed off to western Ukraine for two or three weeks of training. He was a good marksman, it turned out, and the army made him a sniper, said Chesolin.

Soon, he was on the front lines in eastern Ukraine, fighting Russian forces. His family of him did not know much about where he was — he did not discuss locations.

Then the dreaded call came. One of Losev’s fellow soldiers, a friend, called Iuliia. Her husband was dead.

Losev had died May 7 near the eastern Ukrainian city of Severodonetsk, his family was told. A mine in the road detonated as the military vehicle he was driving ran over it, wounding the other soldiers in the vehicle and killing Losev, Chesolin said. As far as they know, he died at the scene.

Fighting in the area was fierce, and retrieving his body complicated. It took days for the army to manage to extract him and get him home.

On May 16, Iuliia, her nails painted alternately in the blue and yellow colors of the Ukrainian flag, waited outside their home as the funeral van arrived with his coffin. Mourners lined the street, kneeling in respect as the van drove by.

She clutched her son’s hands as the funeral procession made its way to the small cemetery on the outskirts of the village, national flags fluttering in the breeze.

The grave was open and waiting, the band standing to one side. Leaving the mourners behind, his wife walked ahead with the coffin and asked the pallbearers to set him down on the grass.

She sank to her knees, ragged sobs escaping in agonizing breaths. One last time, she caressed her chest and bowed over him. For a final few moments, she could be alone with her husband de ella, the man who had gone so quickly from civilian to soldier — and then was gone.