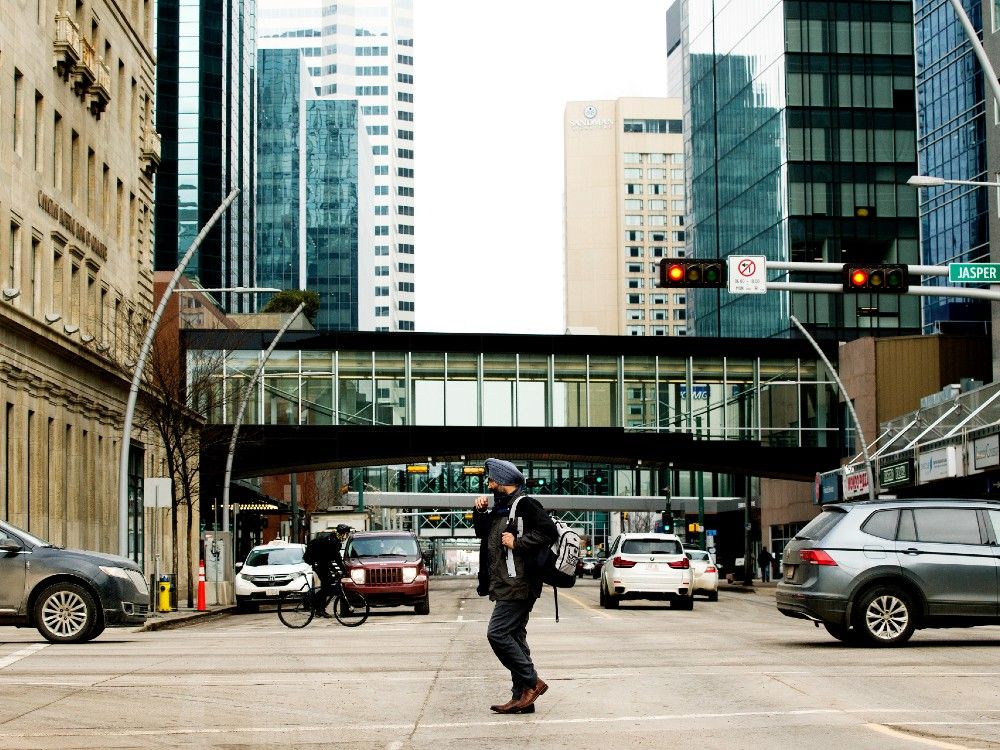 The usual suspects claim downtown is dead. This couldn’t be farther from the truth. I encourage the naysayers to join one of the many downtown Jane’s Walks happening this weekend. We just experienced a once-in-a-century health crisis. It should not be surprising that sadly, vulnerable people and places experienced major hardship.

Many Edmontonians are committed to returning our core to the center of city life. I don’t think they need to try too hard. The arena district is packed on game and concert nights. The Milner Library is as busy as ever. More pedestrians are filling sidewalks, cafes, and plazas. Many vulnerable people living downtown still suffer from addiction, violence, and poverty.

Blame lies entirely with our neglectful premier and his patio-partying cabinet. Making downtown inclusive and safe must mean reopening the safe-consumption spaces, converting offices to affordable housing, bringing back free transit, and opening our car-clogged roads to sidewalks and bike routes.

Columnist off the mark on US abortion debate

Re. “Top US court dashes 50 years of legal principle,” Andrew Cohen, May 5

Is there anything more predictable than an Andrew Cohen piece? He starts off with the statement that, “… court dashes 50 years of legal principle.” Well, how about several hundred years of principle that draft (ie not final) decisions are not to be released to the public?

And then he continues to spin this draft as a predictable right-wing conspiracy to, “end a woman’s right to abortion.” It does no such thing. It instead defers the legislative decision to the various states. Cohen further diligently ignores that even the left’s sweetheart Justice Ruth Bader Ginsburg years ago pointed out the lack of logic and weakness in the Roe vs. wade decision.

Lastly, how can this draft end a “woman’s right?” The jurist of, “impeccable credentials,” that he speaks of, when asked during her nomination hearing de ella stated that she did not know what a woman is because she’s not a biologist. Is Mr. Cohen a biologist?

If Rachel Notley wants me to consider the NDP in the next election, she will have to stop the deliberate baiting and misdirection on anything the UCP does, or does not do.

In the first case, staging a “keep women safe/abortion” press conference based on a leaked “opinion,” not a ruling, from the US Supreme Court in order to evoke a response from the UCP is just stagecraft. Access hasn’t been an issue in Alberta since Ralph’s days.

In the second case, I’m really turned off when any discussion on improving a broken health-care system has Rachel spouting the “no American-style health care here” mantra. We get precious little real care under the current model. Proven options must be discussed if it’s not to crash down around our ears. Enough, already.

No sticker shock on auto insurance

Re. “Where are savings on auto insurance?” Letters, May 3

I have also been driving my car since the UCP has been elected, and I have had very negligible increases in my coverage, also no claims or tickets. Today, my insurance broker called me to explain how they could reduce my payments, my deductible, while maintaining the same coverage. Not a lot of smoke and mirrors there. Maybe Mr. Doward should investigate what insurance options are available to him.

Bring back Chautauqua to replace K-Days

In the past, I have been involved with Chautauqua celebrations and I can’t conceive of a better alternative to K-Days than this excellent historical celebration. On Canada’s sesquicentennial, the Eastside Grannies of Sherwood Park, chose it as the theme for our yearly Rhubarb Rally, and it was a wonderful time of reminiscence and discovery.

Chautauqua originated in the United States, but in 1916, John M. Erickson, “conceived the idea of ​​taking Chautauqua to Canada” and the unparalleled artistic event began on the prairies in Lethbridge. Magnificent Chautauqua tents were set up and the spectacle lasted about a week in any one centre, then moved on to the next village or town. It was the greatest and most anticipated artistic event on the Prairies, with songs, drama, oratory, and bands, and widespread interest in surrounding towns who traveled by wagon to get there.

The general sociability, involvement and community frolic was intense and dynamic. Please check out the book Chautauqua in Canada, by the Glenbow-Alberta Institute, and you will find that Edmonton was eager partner, planner, and participant in this amazing happening.

There is so much to learn about, so much to do, so much to enjoy, so wide a range of opportunity to explore in any Chautauqua event, that Edmonton — with time and attention — could be the center of a new extravaganza that could even rival the Stampede to the south.

Power-bill fees need to be explained

There has been a lot of news these days about the high cost of utilities. I thought I was smart to lock in my rates for my power and heating. Unfortunately, even doing this has done very little to alleviate this matter. Upon examining my bill, I can see why this is the case.

It’s due to the high distribution fees, which I don’t really understand the breakdowns and I am sure not many other people do either. I would welcome an explanation as to what all these fees mean. For example on my last heating bill, my consumption was 11.93 GJ and the cost was $56.92 at a rate of $3.79/GJ with a $9.00 administrative fee.

Teach people on the streets to work

I keep reading about all these homeless people and the people with drug issues and the safe consumption sites. I am dumbfounded how people support this. Everywhere I go, there are now “We are hiring” signs up; Instead of supporting these people, why can’t they be taught to get a job?

I understand that people have mental health issues and drug issues, but to allow this to continue is ridiculous. Let’s put together something that can support these people, get them off the streets, get them off the drugs and teach them how to work and support themselves, instead of the hard workers out there that have to support them.

It’s like seeing the person at the median where we stop at red lights who has his sign saying “I need money;” instead, their sign from him should read “can I have a job?” They would be hired in a minute.

City council needs to rethink their support and provide some sort of building where we can provide the necessities to help with drug addictions, mental illness and homelessness, and teach them how to work for a living. It’s not rocket science.

Re. “With age, women appear more aggressive: study,” May 4

If “the irreproachable bloom of youth gives way to a time-worn truculence in our countenance,” it has more to do with not being able to find anything smart to wear after 40, our disappearing backsides, drooping chests and mandatory retirement at 65. Put away the calipers. Just ask.

We invite you to write letters to the editor. A maximum of 150 words is preferred. Letters must carry a first and last name, or two initials and a last name, and include an address and daytime telephone number. All letters are subject to editing. We don’t publish letters addressed to others or sent to other publications. E-mail: letters@edmontonjournal.com