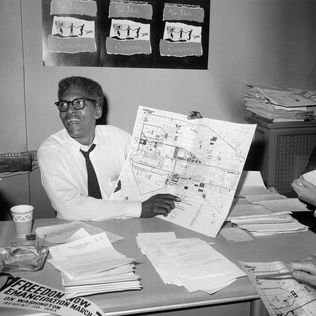 Legendary civil rights leader Bayard Rustin and three other men who were sentenced to work on a chain gang in North Carolina after they launched the first of the “freedom rides” to challenge Jim Crow laws will have their sentences posthumously vacated Friday, more than seven decades later.

“While this judicial action is taking place 75 years after the injustice occurred, never should we fail in examining past wrongs, seeking reparation, and lifting those heavy burdens from our hearts and minds so that future generations may know justice,” Renée Price, chairman of the Orange County Board of Commissioners, said in a statement.

On April 9, 1947, a group of eight white men and eight Black men began the first “freedom ride” to challenge laws that mandated segregation on buses in defiance of the 1946 US Supreme Court Morgan v. Virginia ruling declaring segregation on interstate travel unconstitutional.

The men boarded buses in Washington, DC, setting out on a two-week route that included stops in Durham, Chapel Hill and Greensboro, North Carolina. As the riders attempted to board the bus in Chapel Hill, several of them were removed by force and attacked by a group of angry cab drivers. Four of the so-called Freedom Riders — Andrew Johnson, James Felmet, Bayard Rustin, and Igal Roodenko — were arrested and charged with disorderly conduct for refusing to move from the front of the bus.

After a trial in Orange County, the four men were convicted and sentenced to serve on a chain gang. Rustin later published writings about being imprisoned and subjected to hard labor for taking part in the first freedom ride, which was also known as the Journey of Reconciliation.

In 1942, five years before the Chapel Hill episode, Rustin was beaten by police officers in Nashville, Tennessee, and taken to jail after refusing to move to the back of a bus he had ridden from Louisville, Kentucky, author Raymond Arsenault wrote in the book “Freedom Riders: 1961 and the Struggle for Racial Justice.” A pioneer of the civil rights movement, Rustin was an adviser to the late Rev. Martin Luther King Jr. and was instrumental in organizing the March on Washington in 1963.

Dr. Adriane Lentz-Smith, an associate professor and associate chair in the department of history at Duke University, described Rustin as “a shepherd and a shaper of the 1960s movement.” But Lentz-Smith said his role in the struggle eventually diminished over concerns that his being gay and a former member of the Communist party could hurt the movement.

“He was deliberately moved out of the spotlight,” Lentz-Smith said. “The very things that make him remarkable and admirable to us… in 2022 made him profoundly vulnerable” then, she said.

Last month, five District Court judges marked the 75th anniversary of the arrests of Rustin and the three other men in Chapel Hill by reading a statement of apology.