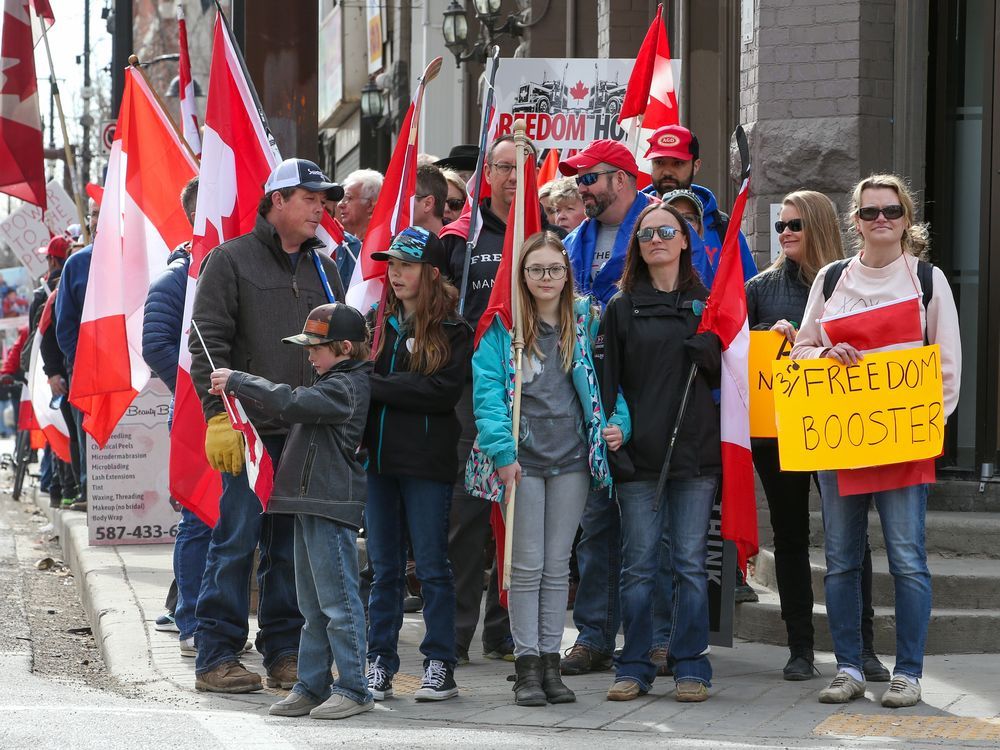 The protests — held to publicly oppose COVID-19 public health orders and the governments that made them — had largely ceased in the Beltline area over the last two months, stymied by a city injunction issued in March that bolstered police enforcement. A handful of demonstrators had continued gathering after the injunction was issued and after it was rescinded in April, though they moved to city hall with diminished numbers compared to the boisterous Beltline rallies through the first few months of the year.

But in a video posted to Twitter by I Love You Coffee Shop, located at the corner of 4th Street and 14th Avenue SW, dozens of people brandishing signs and Canadian flags appeared to have returned Saturday, marching their typical path toward 17th Avenue SW from Central Memorial Park.

“Am I in a time machine?” the cafe remarked in a tweet.

Peter Oliver, president of the Beltline Neighborhoods Association, said despite the break, the protests remain unwelcome by the community, and he’s calling on the police to do more if it becomes a regular occurrence again.

“It shows great disrespect from those people who participated, who I think have some very disturbing views and hope that police and bylaw do everything within their powers to bring this nonsense to an end again,” he said.

“I think it would be good to see the police show a little bit more leadership this time around and use the tools that they have available to them with respect to noise and disruption that these people are causing. That they can do whether there’s an injunction or not.”

A “World Wide Rally for Freedom” also occurred at Courthouse Park on 6th Avenue SW in downtown Calgary on Saturday afternoon. In a video of that rally posted to Facebook, an organizer encouraged the crowd to meet up with the group at Central Memorial Park and “walk the freedom mile one last time, for now.”

Calgary police confirmed to Postmedia they were aware protesters marched through the Beltline on Saturday but did not comment on whether any enforcement action was necessary.

The Calgary Flames’ playoff run continues, and with that comes raucous Red Mile celebrations in the same area. Oliver said there’s a difference between excited fans enjoying themselves and what he called the “hate marches” that strangled Beltline businesses and disrupted the lives of residents for several months.

“There are bars and restaurants and cafes and sports fans, and I mean, that’s part of what makes this neighborhood great,” he said.

“But weekly hate marches is a whole other story, and there’s no patience left for that.”