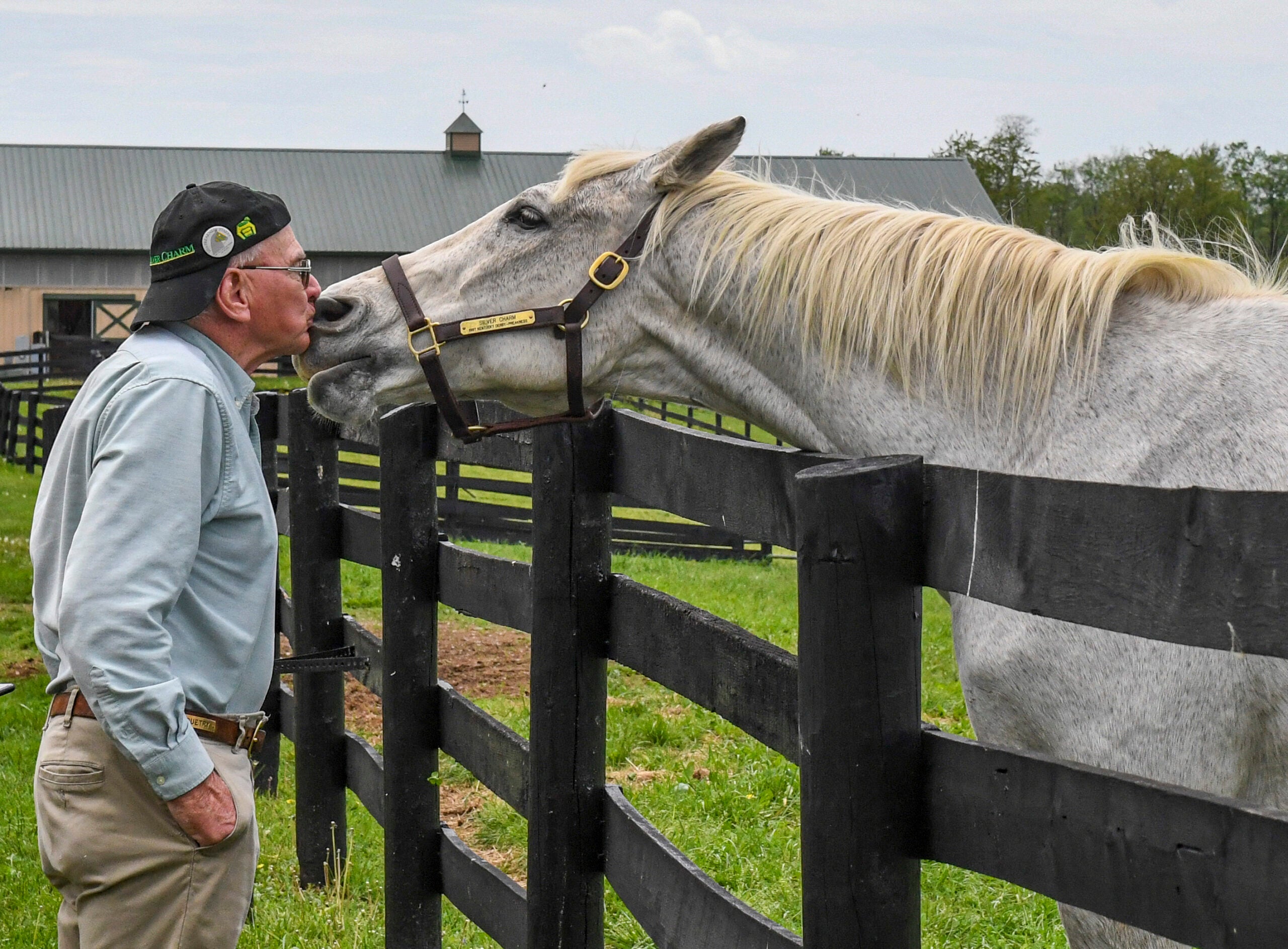 GEORGETOWN, Ky. — At this avant-garde farm, the oldest living Kentucky Derby winner, Silver Charm, 28, can gaze across at Swain, 30, whom he once dueled in Dubai, or look down the road toward Touch Gold, 27, who sneaked up and ruined Silver Charm’s Triple Crown bid at the 1997 Belmont. The 26-year-old gelding Summer Attraction can frolic with 29-year-old gelding Slamming some 22 years after they served as the exact one forgotten day at the late Rockingham track in New Hampshire. Your basic golf cart ride can yield the sight of three beings who wrecked Triple Crown bids at Belmont – Touch Gold, Sarava (2002) and Birdstone (2004), the last one in a great big groan of a comeback to edge the beloved Smarty Jones .

“The villain of all,” Michael Blowen deadpanned.

They aren’t villains here, of course. They’re part of a tapestry that’s part of a trend: retirement homes for racehorses. At the very moment when animal lovers who wish racing would just go ahead and croak seem to have some momentum with horse deaths in focus in recent years, so does a cultural change from a thoughtless last century to a thoughtful this: the growing idea that slaughter isn’t cool.

By now this Derby week, the decade-old Thoroughbred Aftercare Alliance has accredited 82 organizations, including this 19-year-old Old Friends farm. Here’s where somehow a 75-year-old raconteur good at repartee, who didn’t get tenure teaching filmmaking at Emerson College, then became a Boston Globe movie writer and critic, wound up knowing in his bones that the final furlong of life can prove the most exhilarating.

Somehow it’s this guy, Blowen, who grew up in Connecticut thinking horse racing silly, except one day he accompanied an editor to Suffolk Downs near Boston, where he immediately adored “the characters,” the “atmosphere,” the “gambling” and the “drinking” as he wound up saying, “Some people open up the Bible; I opened up the Racing Form,” noting the “revelation.” He once went to Memphis in the 1980s to interview Jerry Lee Lewis, stopped by Kentucky Horse Park on the way back, saw 1970s greats Bold Forbes and Forego, and marveled. I have once just up and volunteered for a New England trainer in the late 1990s. “The slaughter truck used to show up every week and pick up horses,” who would “disappear from the shed row.”

He convinced his wife, a former Boston Globe columnist, to move to Kentucky after she complied on the condition that he wouldn’t go looking for her once she left him. (She still hasn’t.) Now they and their staff tend to about 300 acres, about 240 retirees and about 91 equine graves, with people who hope to have similar farms seeking counsel from as far away as Japan. Now Blowen knows things he never knew he would know, such as that Silver Charm needs to go into the barn at night because he loathes the headlights on the highway.

From clueless beginnings in 2003 they have forged, 19 years birthing umpteen stories.

“It was three-and-a-half years ago, right around Halloween,” he said as Silver Charm hung over the fence just behind. “I owed Woodford Feed $27,000. I owed Hilander Feed $23,000 because he’d provided our hay. And then I owed like $90,000 and I had to pay it all by the end of the year, and I didn’t want to get on the phone, because I realized that if you always have the tin cup out, you’re going to I know. So I put it away. Everything I did was completely counterintuitive.”

He sat in an Adirondack chair in the yard one Friday night, tired from four tours, studying the Daily Racing Form, when a car pulled up. He asked if they could return Saturday, and they said no, and they seemed nice, so wearily he drove the golf cart carrying the pair of North Dakotans. So one ends up saying, “I want to make a donation, but I forgot my checkbook,” of which Blowen says, “Let me put it this way: That’s not the first time I’ve heard that.” Then an email popped in a few weeks later, saying, “I haven’t forgotten,” and, “It’s a one-time-only donation,” so Blowen figured that meant a good chunk like $200 or $500 or maybe even $1,000.

So: “So anyway, I don’t think much more about it, and then I still haven’t started to call people and bother them about the money, and then the Monday after Thanksgiving, I go to the mailbox, and there’s an envelope there from Fargo, North Dakota. And there’s no letter in it. And there’s no nothing. The only thing in it was a check. And I opened up, and it’s a handwritten check,” and it came from the tourist who happened to be a biotechnology pioneer and . . .

“And it was for a half a million dollars.”

He has ridden the adventure to rarefied consciousness. He can tell how stallions must have their own pastures because, as he said: “They like neighbors. They just don’t like roommates. Or that’s what I’m told.” He can tell of those moments of waking to learn that a horse has died and waiting to spell as other horses surround the failed and attempt to nudge him until they process reality. He dislikes the term “rescue” because he frets it implies superiority, and he can suggest that the only reason people think horses can’t talk is because people, as usual, aren’t listening.

To Game On Dude clamoring for carrots, he’ll say: “I’m coming! Jeez! You’re so bossy!” To Summer Attraction, whom he bought one day in 1999 at Finger Lakes, he’ll say, “You’re still so cute.” With Swain, who just arrived this spring among six pensioned sires from Shadwell Farm in nearby Lexington: “Swain, you want to run?”

This fan of eccentrics has learned something eccentric about humans.

“For years, we didn’t charge [visitors],” he said.

Then: “When we started charging, more people came.”

About 15 tourists arrive by the barn into which Silver Charm has gone, leading to an impromptu Q&A.

He tells of Sheikha Hissa’s visit from Dubai (“Five bodyguards!”), Green Mask’s awkward walk (“He’s not that attractive; of course, neither am I”), how the horses give people so much they deserve both “Social Security” and “a 401(k).”

A man mentions he’s from Washington state, and Blowen tells how somebody called after finding the late Taylor’s Special, who finished 13th in the 1984 Kentucky Derby, up there in the Pacific Northwest, wandering abandoned in the woods. He recovered, lived and died here, and Blowen bawled. “You’d think you’d get used to it,” he said of the deaths, “but you never do.”

The retirees do include the unsuccessful, if sometimes with connections. Silver Charm’s daughter Private Charm was in “a slaughter situation” in Louisiana, Blowen said, so she resides where her father lives and her paternal grandmother is buried. One gravestone honors Leave Seattle, a Seattle Slew progeny whose racing record goes: 3-0-0-0 (races, wins, places, shows), for lifetime earnings of, the stone notes, $0. The departed resting here include Derby winners Charismatic (1999) and War Emblem (2002) and apparent Derby winner Medina Spirit (disqualified in 2021).

Supporters include the Stronach family, whose 1996 Breeders’ Cup Classic winner, Alphabet Soup, lived and died here; A&M Records founder Jerry Moss, who owned 2005 Derby winner Giacomo; and the Bafferts, including Hall of Fame trainer Bob, suspended from the Derby after Medina Spirit tested positive for an overage of a medication last spring.

The cemetery up front is named for Nikki Bacharach, the late daughter of actress Angie Dickinson and composer Burt Bacharach, who have supported and visited – including the time Angie Dickinson came and stayed and encountered Little Silver Charm, a miniature horse popular on the grounds. “The third day she was here,” Blowen said, “I brought him in the house and I left. So about 15 minutes later, the phone rings. ‘Michael?’ ‘Yeah.’ ‘This is Angie.’ ‘Yeah.’ ‘There’s a horse in your living room.’ I go: ‘I know. He comes in, he watches Al Roker do the weather, and then he goes back out.’ “

Who knew? Who knew any of it? No wonder many a dusk will find a 75-year-old man grabbing a beer from a refrigerator in the garage, heading to a gazebo in the yard, looking around the rolling green quilt of Kentucky at the athletes he reves, now in the motions of life with “no saddles, no jockeys, no nothing,” and there he’ll feel again a runaway wonder.