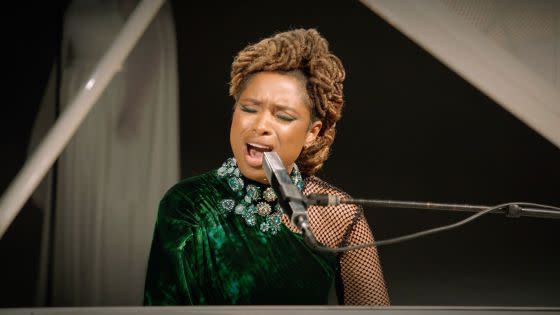 Music industry majors talk about when they first heard and fell in love with recording artists Jennifer Hudson and Tasha Cobbs – also known as the Ladies of Legacy.

Comedian Loni Love fell in love with Jennifer Hudson when she saw her perform Aretha Franklin’s “Share Your Love” on American Idol. While not everyone may know this song, Love knew immediately because her mother had always been a huge Franklin fan and introduced Love to some of those lesser-known tunes growing up.

Love also remembers Hudson making her cry with her voice in the movie dream girls. R&B actor and singer Keith Robinson, who worked with Hudson on dream girls, discusses how Hudson could bring the same level of intensity to a song during rehearsal, no matter how many times she had to sing it. Already a fan of Hudson, singer-songwriter Elijah Blake found new love for Hudson after seeing her in dream girls. Recording artist Jacquees says when he first heard Hudson he thought she sounded like Whitney Houston and he immediately knew she would be great.

The second Lady of Legacy featured in this video is Tasha Cobbs. Grammy-nominated gospel artist Pastor Beverly Crawford recalls that she first met Cobbs as a background singer and was struck by the power and sweetness of his voice, saying the voice could help n’ anyone to go through difficult times. The Grammy-nominated artist DOE says Cobbs’ rendition of “Fill Me Up” made him fall in love with the singer for the first time. Entertainer Dante Bowe admits singing with Cobbs has always been one of his biggest dreams and was greatly influenced by his style.

What makes Hudson and Cobbs Ladies of Legacy, as famous gospel singer Travis Greene says, is that “you can’t talk about music without mentioning them.”