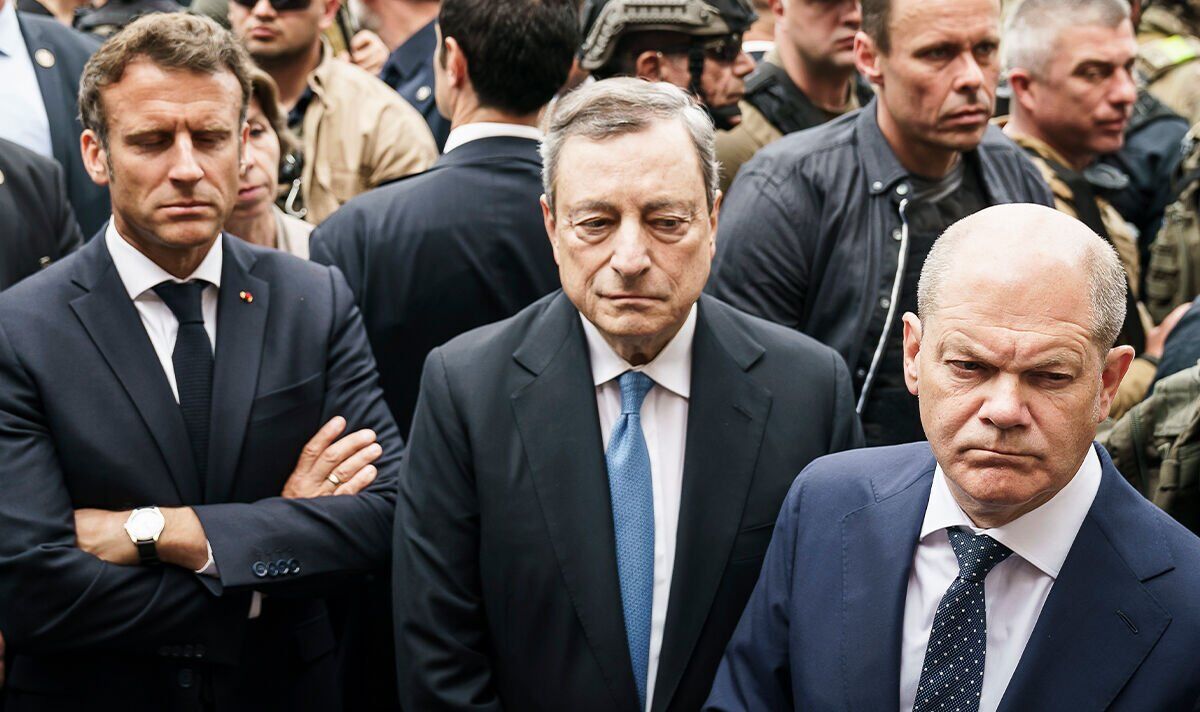 Vladimir Putin’s war should have been a “catalyst for Europe to find a common voice in the world,” political writer Jeremy Cliffe said. Instead, he argued, the approach of its biggest powers — namely Paris, Berlin and Rome — was all but aligned with smaller European nations of the likes of Poland, the Czech Republic and the Baltics.

According to Mr Cliffe, “the heartlands of the ideal of a sovereign Europe have languished behind”.

In his column for the New Statesman, he said: “France, Germany and Italy have indicated a preference for a negotiated solution rather than the potentially long and painful work of driving Russia back to the status quo before 24 February.

“These states have given Kyiv weapons, but with the goal of creating the circumstances for talks.”

Ukraine LIVE: Do it! Lavrov goads UK to ‘force Russia to knees’ in new threat

The trip has been widely described as a show of Western unity as well as a symbolic response to complaints from the Ukrainians about the slow pace of arms supplies.

But, importantly, it also saw the three leaders, who took an overnight train from Poland, vow to support the war-torn nation’s bid to join the European Union.

Chancellor Scholz, who is the main target of protests in the context of military aid, said: “My colleagues and I came here to Kyiv today with a clear message: ‘Ukraine belongs to the European family.’

“But we don’t just want to demonstrate solidarity, we also want to assure that the help we organize — financial and humanitarian, but also when it comes to weapons — will be continued.”

Mr Macron told President Volodymyr Zelensky at a news conference: “Europe is at your side and will stay there for as long as it takes.”

Mr Draghi echoed his counterparts’ remarks: “The Ukrainian people defend every day the values ​​of democracy and freedom that underpin the European project, our project.

“We cannot delay this process.”

The trio’s comments served as a big vote of confidence for President Zelensky, and the latest updates from the EU are a good sign, too. But the deal is not sealed.

One obstacle is other countries standing in line, such as Albania, North Macedonia, Bosnia and Kosovo. Some member nations are expected to express reservations about letting Kyiv jump the queue.

All 27 Union leaders will discuss the issue at a summit on June 23 and 24.

While the EU candidacy is certainly a step in the direction the invaded nation is seeking to take, Mr Cliffe argued the post-Brexit bloc lacks the strength of a country praised by Mr Zelensky as having shown model leadership.

Addressing the West’s willingness to provide Kyiv with “the tools it needs to win”, the Berlin-based writer said: “The biggest European power in that camp is no longer an EU member: the UK.”

President Zelensky has in a number of instances expressed his gratitude for London’s attitude.

He said in a video statement last week: “Words turn into actions. That’s the difference between Ukraine’s relationship with Great Britain and other countries.