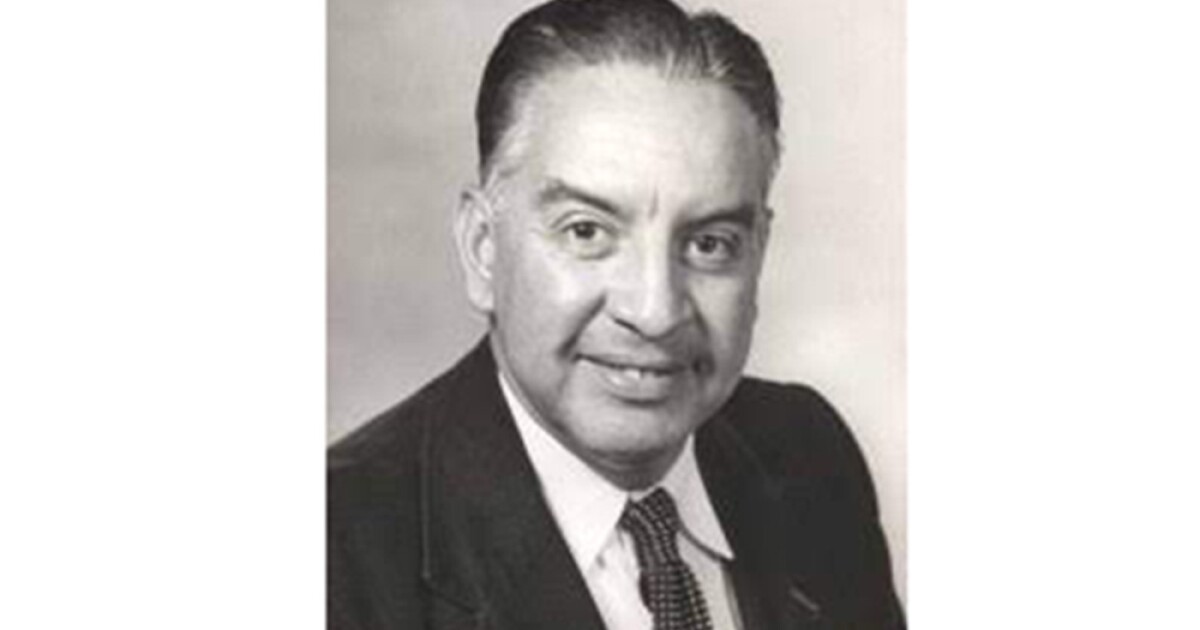 Hello and welcome to Essential California bulletin. It’s Friday, January 7. I am Gustavo Arellano, and I write from Orange County.

I belong to a small genre within English-language journalism in Southern California: the “latino columnist. “Members can cover anything but tend to focus on Latino issues, not just because of all the great stories in our community, but also translating Latinos to readers, Latinos and not. Because we are. just conquered the United States in 1848 or that we had to explain why Latinos like to eat tamales on vacation, we always seem to have to, you know?

Many attribute the birth of the Latin chronicler genre to my predecessor, the martyr Rubén Salazar. Corn Grandpa Arciga would have something to say about it.

I have encountered his name several times over the years while digging through the ever-rich LA Times archives. He was an immigrant, a playwright, the public relations manager of Radio TIME, the first all-Spanish radio station in Southern California, but Arciga also worked freelance as an entertainment writer from the 1950s to the 1970s for The Times and its afternoon papers, the Mirror and Mirror News.

The native of Mexico specializes in courses at Million dollar theater, the legendary downtown LA venue that has hosted Latin music’s biggest stars for decades. Among the Southern California debuts examined by Arciga: the ranchera icon Javier Solis (whom Arciga described as a “nervous charro”), legend of salsa Celia cruz (“A singing bomb from turbulent Cuba”), and the recently deceased Chente (“Surely on his way to the heights”).

But digging deeper into Arciga’s clips, I also realized that he – and not Salazar – was probably the first English-speaking Latino columnist for a major newspaper in Southern California, if not the United States.

Twice a week for most of 1957 Arciga wrote the “Latin holidays” column for the Mirror News. “In him,” a February 27 tabloid story said in now-dated prose, “there is a happy blend of cultures, Latin American, with Pepe taking a wise old Latin eye on the contemporary Los Angeles scene. Angeles and writes it in a crackling and unique idiom.

History also said that Arciga moved its column of “another paper”. This would have been the rival Herald-Express, where he had worked for a few years.

Arciga was a living writer, no longer a talker compa one chingon crossed like Salazar and many Latino columnists who followed. His column offers a fascinating snapshot of Latin American life in Southern California in the late 1950s, a time when Mexican Americans were integrating and assimilating into the middle class – and just before the massive migration from Latin America associated with the radicalized youth who were shaking up the Latin American identity in the United States. always.

A typical Arciga dispatch had him lying around Biltmore Hotel with comedy legend Cantinflas (“Happily wiggling his microscopic mustache”) coupled with a take for a talk titled “The Kind of Education I Want for My Children and Grandchildren” held at Is the He wrote about a conversation he had with a Latin American civil rights pioneer Dr Hector P. García, then yell at some young graduates from High Roosevelt in Boyle heights who did good.

“Latin Holidays” ridiculed readers who questioned its frequent use of Spanish, explained the intricacies of bullfighting or the Virgin of Guadalupe, and denounced the portrayal of Mexican Americans as criminals on local television stations. And more often than not, Arciga has taken the time to answer readers’ questions, polite and not, about Mexican culture – just as I would decades later in my Ask a Mexican!

You can read some of Arciga’s reviews online through Larry Harnisch, a former Timesman who runs the LA Daily Mirror, a site on LA history he started as a blog for The Times. Harnisch told me he was “delighted” to re-edit Arciga, which he had never heard of before starting his project. He puts Arciga in the same league as the most famous Mirror columnists of the time: investigative journalist Paul coates and specialist in slices of life Matt weinstock.

“Pepe was an absolute gift because performance matters,” Harnisch said. “Representation counted then, and it counts now.”

The race for “Latin Holiday” was short – the last edition was on November 6, 1957, with no hint that the column was ending other than a take for the Arciga show on Radio KALI. He did not appear in the Mirror News for two months, when he reviewed Amalia Mendoza to the Million Dollars. There was no mention of his previous column whatsoever.

Note: Some of the sites we link to may limit the number of stories you can access without subscribing.

Home COVID testing has become more difficult: LA County is suspending program due to backlog. Thank goodness my wife had me buy a few in mid-December. Los Angeles Times

How the pandemic made hotel cleaning more difficult – and disgusting. Remember to tip an additional $ 50 the next time you stay at the Holiday Inn Express in McKinleyville. Los Angeles Times

Historic lamps are stolen from an LA bridge. The city removes the rest to keep it in a safe place. That’s why LA can’t have nice things. Los Angeles Times

If you’re a fan of this newsletter, you’ll love our daily podcast “The Times”, hosted every day of the week by columnist Gustavo Arellano, as well as reporters from across our newsroom. Go beyond the headlines. Download and listen on our app, subscribe on Apple Podcasts and follow on Spotify.

Locked up in the United States Capitol on January 6. LA Times congressional reporter Sarah D. Wire appears on The Times, our daily podcast that I host, to talk about her front row experience on that dark day. (Click here to read all of our stories on the subject.) The Times Podcast

Democrats are delivering universal health care in California, funded by new income and business taxes. Don’t hold your breath – the plan will face major hurdles over the next few months. Los Angeles Times

A simple paperwork error can result in the deportation of asylum seekers. Rosa Díaz got lucky during a lunch break. Exhibit 1,238,397 on how our country’s immigration policies are weak salsa. KQED

Does it matter if dad is not vaccinated? Family courts have begun to weigh in. Pandejos you always have to fend for yourself … Los Angeles Times

The LAPD captain whose home was raided is the latest to sue the city for a gun store scandal. Because the Keystone Kop hijackings shouldn’t be the exclusive domain of Los Angeles County Sheriff Alex Villanueva! Los Angeles Times

Is the US-Israel Alliance Blocking Justice in the Murder of a US-Palestinian Activist? Israel’s leading liberal newspaper looks at the 1985 assassination of Alex Odeh in Santa Ana, which my colleague Gabriel San Román covered extensively and for which he is interviewed in this article. Haaretz

Kelly Ernby opposed the vaccination warrants. Her death from COVID made her a symbol. The Orange County Republican and deputy prosecutor were not vaccinated, friends said. Los Angeles Times

How Susan Sorrells transformed a mining village in Death Valley into a model of eco-friendly tourism. Note to the New York Times: This is how you go about an out-of-town parachute expedition, which California means. New Yorker

THE CULTURE OF CALIFORNIA

Daughter of farm laborers is now a judge in the Fresno County Superior Court. #respect to newly sworn in Irene A. Luna. Fresno Bee

San Francisco’s oldest restaurant, Tadich Grill, proudly named January 6 Dave Portnoy Day. The owners have no problem with the Barstool Sports founder’s policy and its many controversies – the place benefited from its COVID-19 relief fund on January 6, 2021. No word from them on the other thing that happened on that date. SFGate

Get our free daily crossword, sudoku, word search and arcade games in our new game center at latimes.com/games.

My wife and I were driving on Highway 1 en route to Vietnam in November 1967 when we pulled up to Cambria. So calm, welcoming and peaceful that I vowed to return if I returned from the war. I have tried to visit several times a year since. A three-tip sandwich and a cold beer with unique village shops always welcome us. On Moonstone Beach, the waves calm my mind. My ashes will be scattered there and will be my affordable “forever” beachfront home. Then we walk to the Fiscalini Ranch to let the power of nature and the wind set us free.

If you have a memory or a story about the Golden State, share it with us. (Please limit your story to 100 words.)

Please let us know what we can do to make this newsletter more useful to you. Send your comments to essentialcalifornia@latimes.com.