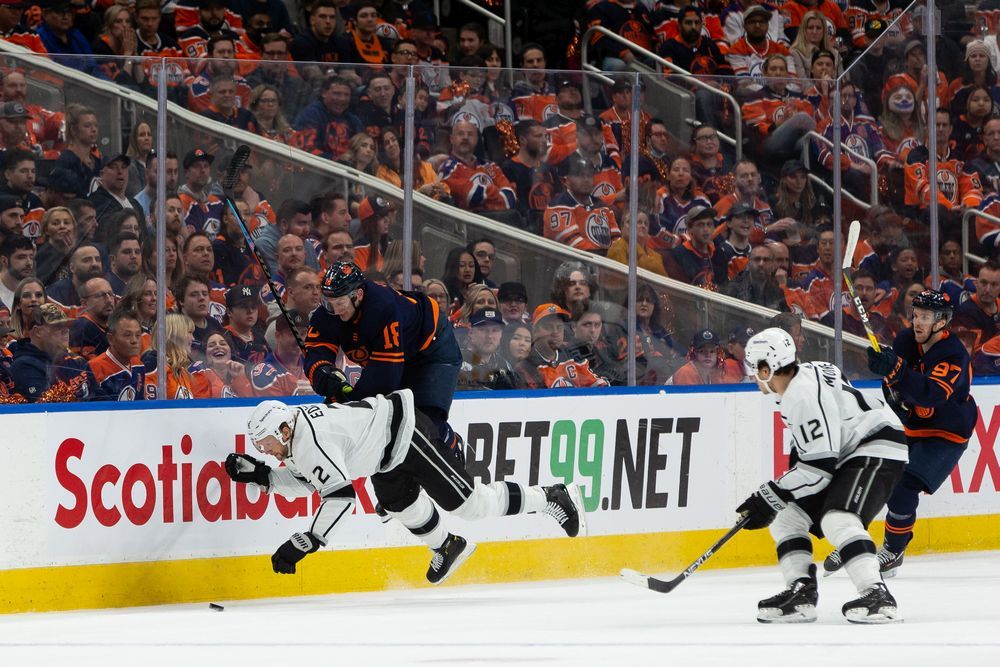 Edmonton Oilers exorcized a few demons during Wednesday night’s 6-0 drubbing of the Los Angeles Kings that evened their opening-round series at 1 game apiece. For the Oil, it was a win that broke a 7-game post-season losing skein that stretched back to 2020… 6 of those 7 losses by 1 goal, the 7th effectively so (a couple of late empty netters made it 4-1 but trust me, it was close until the end).

So to win a playoff game by any score was an absolute must for the Oilers, simply to get the orangutan (named Schneid?) off their collective backs. To do so in such convincing fashion made for a fun night for the home fans, even as it left some questions unanswered. Lots of time left in this series for new and different challenges, starting on Friday night in Tinseltown where the Oilers will attempt to seize back home ice advantage.

A lot went right for the Oil on Wednesday, including heaping helpings of puck luck that saw the 2nd, 3rd and 4th Edmonton goals scored on deflections that found holes, 2 of them off of enemy sticks. At the other end of the ice, the Kings found iron at least twice and had another shot sneak through netminder mike smith without quite enough steam to cross the goal line. Meaning the game was a bit closer than 6-0 suggested. But make no mistake, the Oilers were clearly the better team and convincingly earned the win.

What did they do right? For starters, coach Jay Woodcroft picked his spots as to how to change his squad’s approach after their 4-3 loss in Monday’s opener. Let’s start with what Woodcroft didn’t do:

Where the coach did tinker was at the bottom end of his roster, choosing to sit his 7th defenseman, swing man Chris Russell, in favor of a 12th forward. winger Josh Archibald was a surprise added to the third line alongside Ryan Nugent-Hopkins and Derek Ryan. The plan seemed to be to add some bite to the line-up, and Archibald delivered with 5 hits, while contributing 2 blocked shots and 2 takeaways in a determined defensive effort. In his nearly 10 minutes at even strength, not a whole lot happened, in the sense that just 5 shots on goal were recorded (3 by Edmonton) and no goals at all. On this night, quiet minutes from depth lines were exactly what was needed.

Not that they were entirely quiet. The line delivered 10 hits among them and contributed to a team-wide dedication to the physical game, especially from a forward corps that delivered 37 of Edmonton’s whopping 48 hits on the night. They spent much of the game — indeed, of the 2 games to date — with Kings d-men squarely in their cross hairs. So far in the series, the Oilers have laid a collective 44 hits on LA blue-liners, compared to 32 the other way.

I’ll admit that hits are not everyone’s idea of ​​a useful stat — for one thing, they are suggestive of which team doesn’t have the puck. To give me a clue as to the nature of a player, or of a hockey game. And they have added significance in a playoff series, where teams get a chance to wear down their opponents over an extended series of games; that’s probably why their numbers tend to increase substantially over regular season play.

As with any stat, not all hits are creating equal. Some official hits have little or no impact on the game, serving neither to lay punishment on an opponent nor to create a change in possession. But others accomplish one or both of these objectives. And to these perhaps biased old eyes, it was Edmonton’s physical play that was having a much bigger impact — using the term advisedly — on the game than that of their opponents.

One thing’s for sure, the hits kept on coming no matter who was on the ice.

Make it 24 hits by Oilers forwards on Kings rearguards in Game 2 alone, with all but 3 of them taking place in the LA end of the ice. Which statistical record matched my eye test of Woodcroft’s game plan: move the puck quickly from the back end to the forwards, chip it behind the LA defencemen, and work them hard along the walls and in the trenches. The Oilers dominated long stretches of play in enemy territory in the second period—their best of the series to date—and by the third a couple of the Kings’ younger defenders were starting to wilt under the pressure.

Over the 2 games to date, a pair of Kings d-men, Sean Durzi and Alex Edler, have both been on the receiving end of 10 hits, Olli Maatta 9. No Oilers D has been hit more than 6 times. As the series wears on, that will take a toll.

Worth noting that the Oilers season high in hits was 39 (vs. Winnipeg in a 65-minute game on Nov 18) while they averaged just over 22 per game which ranked middle of the pack in the NHL. The playoffs have been a different story, with a new season high 40 hits in Game 1 quickly topped by 48 in Game 2.

Which hardly makes them unique in the second season, whose format encourages physical play. But from this distance, the Oilers are ready, willing and able to hold their own and then some in this department, from Connor McDavid right on down. If the insertion of Archibald is any indication, Woodcroft has identified it as a priority, and the team as a whole has been buying at this point. Something to monitor going forward as the scene switches to southern California for Games 3 & 4 this weekend.

Speaking of southern California, the Oilers’ AHL affiliate is based there, in Bakersfield. The squad is short-staffed with a number of injuries, but somehow keeps on producing results. First they clinched home ice in the first round (via the tie-breaker route) with a 3-1 win in the final game of the regular season last weekend. Then the Condors made short work of the Abbotsford Heat in the preliminary round, winning consecutive games on Tuesday and Wednesday to sweep the best-of-three 2-0.

Late heroics were the story of both games. In the opener Colin Chaulk’s crew trailed 1-0 into the 60th minute before typing the score on Seth Griffith‘s snipe with 30 seconds on the clock, converting a nifty 3-way passing play with hot prospect Dylan Holloway and utility man Yanni Kadis. That set the stage for james hamblin to provide the game’s sudden death with a powerplay deflection 7 minutes into overtime. (Game 1 summary)

In Game 2 the Condors again trailed 1-0 deep into the game, before adam cracknell tied the score after recent signee noah philp drove the puck hard to the net. Brad Malone put the Condors in front early in the third, but the Canucks tied it midway in the frame. That set the stage for Cooper Marody to score the game-winner with just 1:22 on the clock as Bakersfield held on to win 3-2. (Game 2 summary)

The decisive play was at least as strange as this photo suggests:

Both games featured a goaltending duel between Bakersfield’s Stuart Skinner and Abbotsford’s Spencer Martin, both of whom made some noise in the NHL this season. (Martin played 2 outstanding games vs. the Oilers.) Skinner allowed just 3 goals on 60 shots for a nifty .950 save percentage in the series, besting Martin’s .938.

The seedings are not cast in stone just yet, but at this point it looks like the Condors will likely face Pacific Division powerhouse Stockton Heat in the second round.

The Oilers have some nice prospects on the vine on both the pro and amateur sides of the game just now. 2021 first-rounder Xavier Burgault is one to watch.

Recently at the Cult of Hockey

LEAVINS: Player grades from 6-0 whitewash of Kings in Game 2

McCURDY: What the Oilers do different under Woodcroft/Manson

LEAVINS: Time has come for the Oilers to take the next step — 9 Things