Russia have banned more than 100 Australiansincluding mining magnates, business leaders and dozens of journalists, from traveling to the country, in retaliation for sanctions imposed following the Kremlin’s unprovoked invasion of Ukraine.

The list of 121 names, which includes billionaires, newspaper bosses, chief executives, professors and military officers, builds on the 228 Australians including then leader Scott Morrison and current Prime Minister Anthony Albanese banned from Russia in April.

The Russian Ministry of Foreign Affairs claimed the banned people formed part of Australia’s “Russophobic” agenda and warned more would be added to the country’s “stop list”.

“Taking into account the fact that the official Canberra does not intend to abandon the anti-Russian course and continues to produce new sanctions, work on updating the Russian “stop list” will continue,” it said, in a statement published on Tuesday.

“I have repeatedly and insistently defended Russian culture against its detractors,” he said, on Twitter.

“I have highlighted its most humane voices and the lessons about human rights and freedom that Russian dissidents have taught the West.

“It means drawing attention to brave Russians who oppose him. It means pointing out that there is more to Russian culture than his totalitarian despotism.”

Fellow academic Matthew Sussex, from the Australian National University’s strategic and defense studies centre, joked that he was “humbled” to be included on the list among other such “worthy recipients”.

Other prominent names include the editors-in-chief of The Age, The Sydney Morning Herald, The Australian, the Daily Telegraph, the west australian and the Australian Financial Review; mining magnates Gina Rinehart and Andrew Forrest; and the board of directors chairs at Nine, Seven West Media, SBS, the ABC and News Corp Australia.

9News.com.au journalist Richard Wood has also been added to the “stop list”.

Australia has sanctioned hundreds of Russians including oligarchs, business leaders and their family members, along with propagandists and “troll farms”, as well as dozens of businesses.

It’s part of an international effort from the West to combat Russia’s months-long war against Ukraine.

The new government is yet to announce any further sanctions but Prime Minister Anthony Albanese has consistently condemned the Kremlin’s “unilateral, illegal, immoral” attack on Ukraine as an outrage.

“This is something that Russia must pay a price for its actions. It’s as simple as that,” he said last month, the day after he was sworn in.

“These actions are against democratic values, against national sovereignty, against the rule of law, against the very Charter of the United Nations, and they should be condemned unequivocally. And I do so again now.” 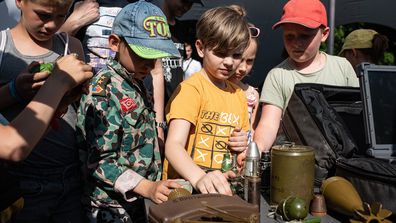 Kids get lessons in explosives in Ukraine

The sanctions are paired with vast weapons-supply campaigns, including Australia’s delivery of Bushmaster armored vehicles after Ukrainian President Volodymyr Zelenskyy made a public plea in his address to the Australian Parliament.

The United States announced another US$1 billion in military aid to Ukraine on Wednesday, including 18 howitzers, 36,000 rounds of howitzer ammunition and two harpoon coastal defense systems.