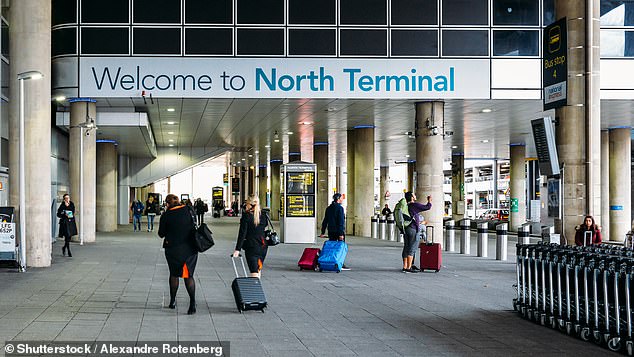 A disabled passenger has fallen to his death on an escalator at Gatwick Airport after getting off his flight when he was left on an EasyJet plane.

Do you know the family involved?

The man had been waiting for assistance to disembark he and his wife’s flight on Wednesday when he became frustrated and left to navigate his way through the busy North Terminal.

His partner had already been taken off the jet by security staff from Wilson – who are a private firm contracted with helping disabled passengers.

It is understood he was left on the plane and decided to leave himself shortly before the tragedy happened.

His death is the first to be linked to the travel chaos engulfing airports across the country.

A source said: ‘A member of staff came to take [a] woman into the airport but the man was left on the plane. He must not have wanted to wait for the staff member to come back so he made his own way into the terminal.

‘While on the escalator the passenger fell down and suffered serious injuries as a result and died. This is a tragic incident which should never have happened. Someone should have been helping him.’

The source told The Sun: ‘There’s been a real issue with staffing problems and some disabled people have had to wait for hours for help.

‘Normal airport staff have had to be reminded not to help disabled passengers if they’re not qualified to, even if it means passengers waiting for hours.’

A disabled passenger fell to his death after reportedly becoming frustrated by long waits at Gatwick Airport. [File image] 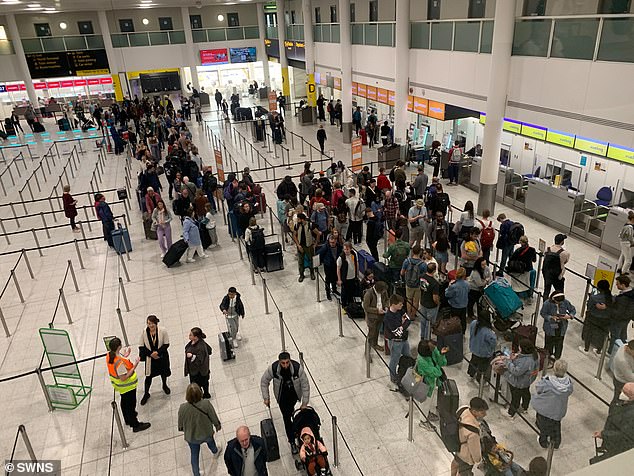 Shocking scenes from around the country have even shown some holidaymakers forced to sleep on the floor of terminals amid long delays.

Travel expert Paul Charles, from The PC Agency, said: ‘Questions will be asked about the lack of staff available to assist in the middle of the day when this flight arrived. It shows the increasing frustration of some passengers who can’t wait on aircraft for long periods hoping help may eventually arrive.’

Gatwick is one of many airports that have witnessed huge queues and flight chaos caused by staff shortages this month.

Earlier this week, EasyJet revealed it was taking four weeks longer than normal for new cabin crew to receive security passes because of referencing delays.

Holiday plans for millions of Britons continue to hang in the balance as holidaymakers brace for a week of rail chaos. 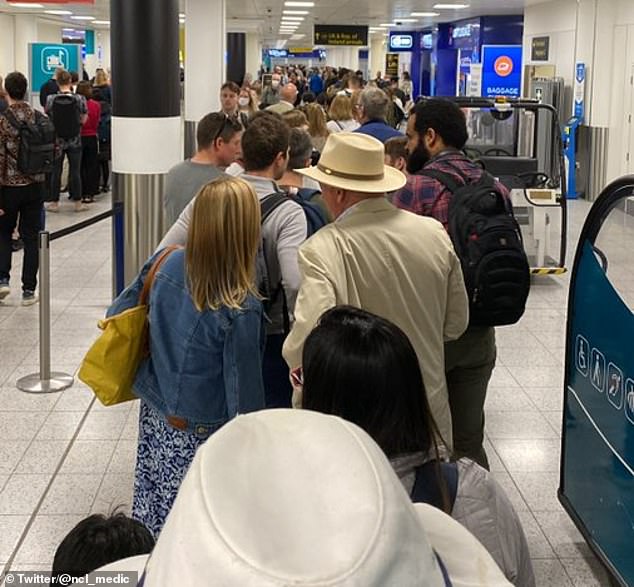 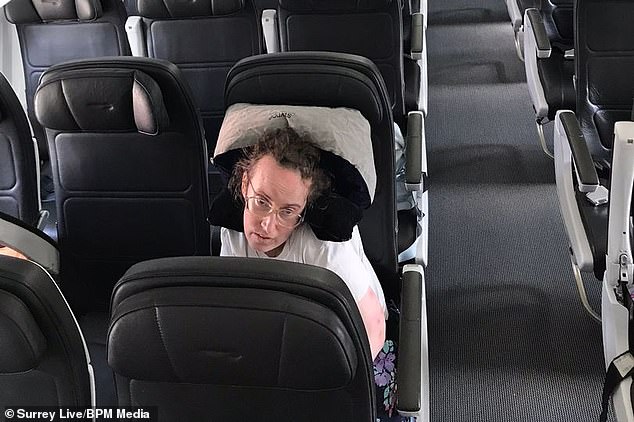 Gatwick apologized to Victoria Brignell, who is paralyzed and requires the use of an adapted wheelchair, who waited on her flight for an extra 90 minutes after flying back into the UK following a holiday in Malta

Gatwick outsources its assistance services to provider Wilson James, it was reported.

A spokesman for EasyJet said: ‘A number of our cabin crew provided medical assistance to a passenger at Gatwick whilst waiting for paramedics. However, the passenger sadly passed away.’

A Gatwick Airport spokesperson added: ‘This is a sad and tragic incident and our thoughts remain with the family of the deceased.

‘A member of Wilson James staff was waiting when the aircraft arrived and was in the process of disembarking the three PRM passengers when the incident occurred.

‘Staff shortages were not a factor in this incident as has been claimed. It is normal for one staff member to disembark three passengers who require assistance by taking them one at a time the short distance to the waiting buggy. 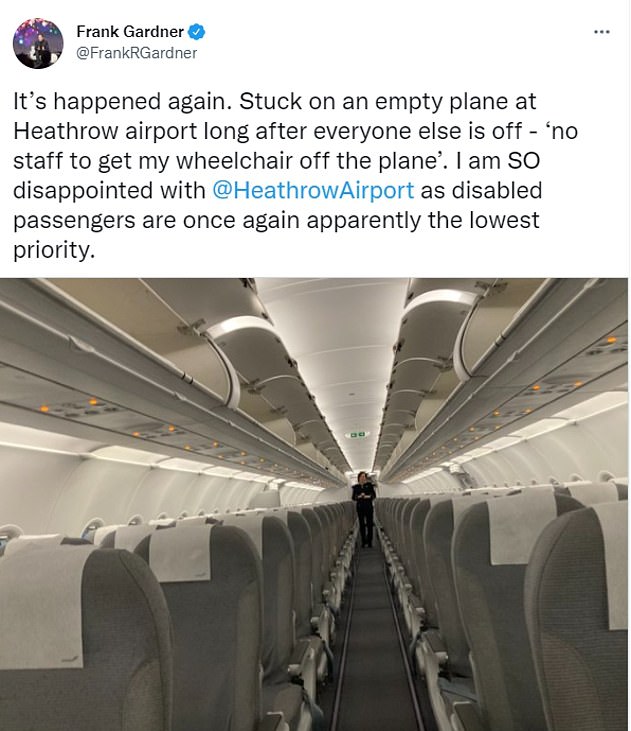 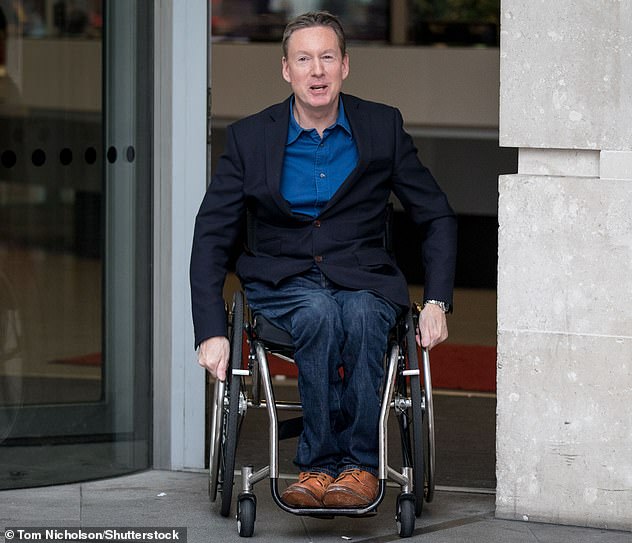 ‘A formal investigation is currently under way and it would not be appropriate to comment further.’

The developments come just a week after Gatwick Airport apologized to a quadriplegic passenger who was left stranded on her plane for more than an hour when staff failed to help her leave.

Victoria Brignell, who is paralyzed and requires the use of an adapted wheelchair, had been flying back into the UK following a holiday in Malta.

She also claimed she wasn’t able to use the toilet while stuck on the plane, while her carers were also made to stay and wait an extra hour and a half until she safely arrived home.

Ms Brignell, of Shepherd’s Bush, said: ‘I booked the help three months in advance, it wasn’t as if I just turned up, they knew I was coming, and I reminded them two weeks ago, and still I didn’t get the service that I should expect to have.

‘My wheelchair arrived promptly, but the people who were supposed to help me get off the plane didn’t turn up – they were busy elsewhere.’

It comes as BBC correspondent Frank Gardner, who uses a wheelchair, slammed Heathrow after being left on an empty plane last month – accusing the treating disabled passengers as ‘lowest priority’.

It was the fourth time he says this has happened to him since he began using a wheelchair in 2004 – after being shot six times by militants while reporting in Saudi Arabia.

The veteran journalist, 60, furiously tweeted: ‘It’s happened again. Stuck on an empty plane at Heathrow airport long after everyone else is off — ‘no staff to get my wheelchair off the plane’.

‘I am SO disappointed with @HeathrowAirport as disabled passengers are once again apparently the lowest priority.’

It comes as Downing Street said ministers and officials had been meeting with aviation industry leaders and Border Force to increase ‘resilience for the sector throughout the summer’ to avert further travel chaos.

Experts said that airlines ‘are simply unable to cope with that demand due to a lack of resources’ and warned that the ‘nightmare’ disruption could last all year.

BA has axed hundreds of flights up on some routes to the US and the Far East until September, affecting thousands of travellers’ plans.

The Unite union said there are ‘chronic staff shortages across the board’, and that ‘current pay and conditions in the industry are so poor that workers are voting with their feet’, adding: ‘It can only be resolved by offering higher wages and better working conditions for staff.’

Union officials added that many airport staff are being asked to work extra hours, and ‘relying on staff overtime to run the business can’t be a long-term solution’.

Rory Boland, the travel editor of consumer group Which? said that the government must intervene to make sure airlines stop selling flights ‘they can’t actually provide’.

He told The Times: ‘We’re already seeing very long queues, widespread chaos at airports, huge stress for people planning to get away, and we haven’t hit the peak yet.

‘Airports and airlines have known this recovery was coming for a period of time now. We’re continuing to see things get worse, not better.’

But airport bosses say queues have been exacerbated by passengers turning up earlier than normal from the early hours.