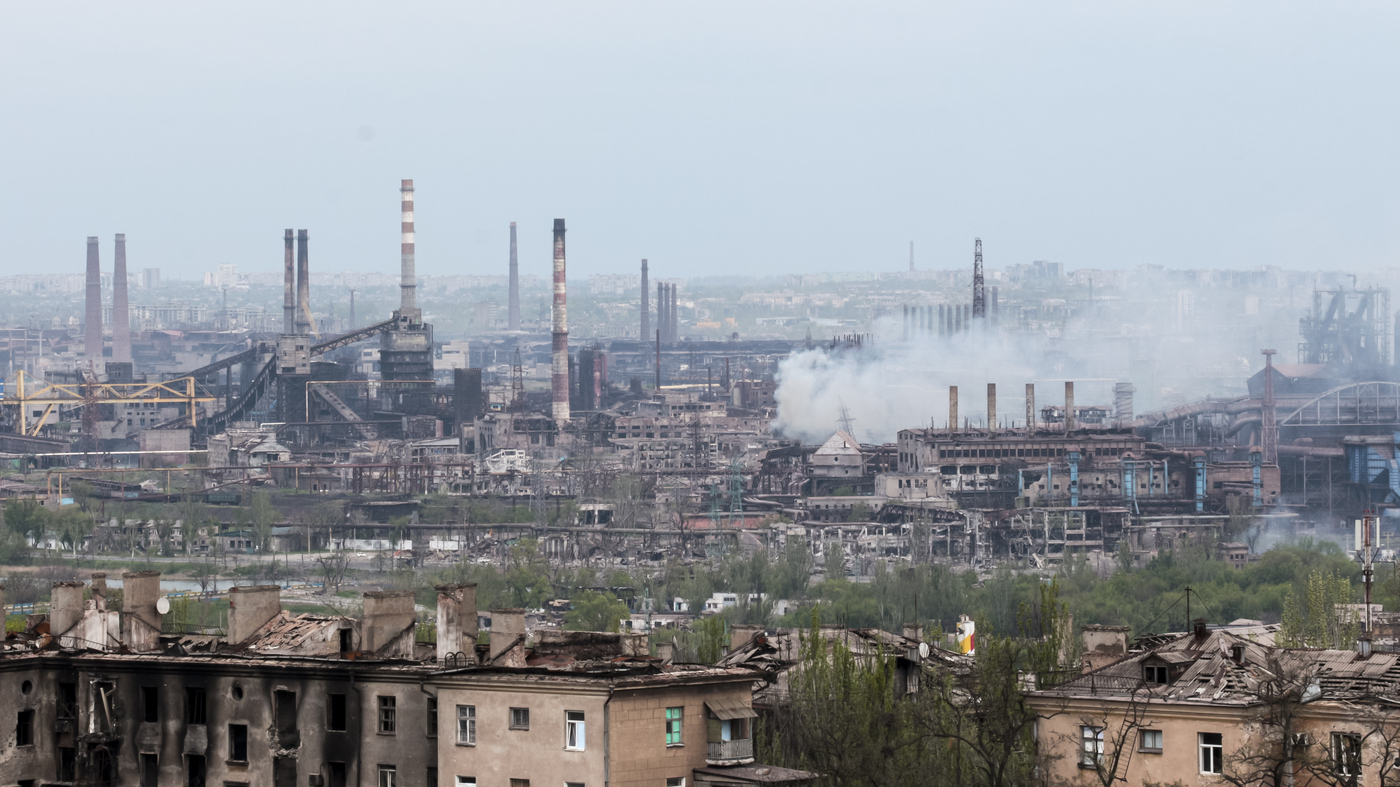 Smoke rises from the Metallurgical Combine Azovstal in Mariupol, in territory under the government of the Donetsk People’s Republic, eastern in Mariupol, Ukraine, Thursday, May 5, 2022.

Smoke rises from the Metallurgical Combine Azovstal in Mariupol, in territory under the government of the Donetsk People’s Republic, eastern in Mariupol, Ukraine, Thursday, May 5, 2022.

LVIV, Ukraine — Ukrainian fighters battling Russian forces in the tunnels beneath Mariupol’s immense steel plant refused to surrender in the face of relentless attacks, with the wife of one commander saying they had vowed to “stand till the end.”

The battle, in the last Ukrainian stronghold of the strategic port city reduced to ruins by the Russian onslaught, appeared increasingly desperate on Thursday.

“They won’t surrender,” Kateryna Prokopenko said after speaking by phone to her husband, a leader of the steel plant defenders. “They only hope for a miracle.”

She said her husband, Azov Regiment commander Denys Prokopenko, told her he would love her forever.

“I am going mad from this. It seemed like words of goodbye,” she said.

The bloody battle came amid growing speculation that President Vladimir Putin wants to present the Russian people with a battlefield triumph — or announce an escalation of the war — in time for Victory Day on Monday. Victory Day is the biggest patriotic holiday on the Russian calendar, marking the Soviet Union’s triumph over Nazi Germany.

Some 2,000 Ukrainian fighters, by Russia’s most recent estimate, were holed up in a maze of tunnels and bunkers beneath Mariupol’s sprawling Azovstal steelworks. A few hundred civilians were also believed trapped there.

“There are many wounded (fighters), but they are not surrendering,” Ukrainian President Volodymyr Zelenskyy said late Thursday in his nightly video address. “They are holding their positions.”

He said the attack was preventing the evacuation of remaining civilians.

“Just imagine this hell! And there are children there,” he said “More than two months of constant shelling, bombing, constant death.”

The Russians managed to get inside with the help of an electrician who knew the layout, said Anton Gerashchenko, an adviser to Ukraine’s Internal Affairs Ministry.

“He showed them the underground tunnels which are leading to the factory,” Gerashchenko said in a video posted late Wednesday. “Yesterday, the Russians started storming these tunnels, using the information they received from the betrayer.”

The Kremlin denied its troops were storming the plant.

Municipal workers attach a Russian national flag to a pole preparing to celebrate 77 years of the victory in WWII in Mariupol, in territory under the government of the Donetsk People’s Republic, eastern Ukraine, Thursday, May 5, 2022.

Municipal workers attach a Russian national flag to a pole preparing to celebrate 77 years of the victory in WWII in Mariupol, in territory under the government of the Donetsk People’s Republic, eastern Ukraine, Thursday, May 5, 2022.

The fall of Mariupol would deprive Ukraine of a vital port, allow Russia to establish a land corridor to the Crimean Peninsula, which it seized from Ukraine in 2014, and free up troops to fight elsewhere in the Donbas, the eastern industrial region that the Kremlin says is now its chief objective.

Capt. Sviatoslav Palamar, deputy commander of the Azov Regiment, pleaded on Ukrainian TV for the evacuation of civilians and wounded fighters from the steelworks, saying soldiers were “dying in agony due to the lack of proper treatment.”

The Kremlin has demanded the troops surrender. They have refused. Russia has also accused them of preventing the civilians from leaving.

The head of the United Nations said another attempt to evacuate civilians from Mariupol and the plant was underway. UN Secretary-General Antonio Guterres said: “We must continue to do all we can to get people out of these hellscapes.”

More than 100 civilians were rescued from the steelworks over the weekend. But many previous attempts to open safe corridors from Mariupol have failed through, with Ukraine blaming shelling and firing by the Russians.

Meanwhile, 10 weeks into the devastating war, Ukraine’s military claimed it recaptured some areas in the south and repelled other attacks in the east, further frustrating Putin’s ambitions after his abortive attempt to seize Kyiv. Ukrainian and Russian forces are fighting village by village.

The head of Britain’s armed forces, Chief of the Defense Staff Adm. Tony Radakin, said Putin is “trying to rush to a tactical victory” before Victory Day. But he said Russian forces are struggling to gain momentum.

On Thursday, an American official said the US shared intelligence with Ukraine about the location of a Russian flagship before the mid-April strike that sank it, one of Moscow’s highest-profile failures in the war.

The US has provided “a range of intelligence” that includes locations of warships, said the official, who was not authorized to speak publicly and spoke on condition of anonymity. The official said the decision to target the missile cruiser Moskva was purely a Ukrainian decision.

Fearful of new attacks surrounding Victory Day, the mayor of the western Ukrainian city of Ivano-Frankivsk urged residents to leave for the countryside over the long weekend and warned them not to gather in public places.

And the southeastern city of Zaporizhzhia, a key transit point for evacuations from Mariupol, announced a curfew from Sunday evening through Tuesday morning.

A girl looks through the window of a car as her family arrives from Mariupol at the center for displaced people in Zaporizhia, Ukraine, Thursday, May 5, 2022.

A girl looks through the window of a car as her family arrives from Mariupol at the center for displaced people in Zaporizhia, Ukraine, Thursday, May 5, 2022.

Mariupol, which had a prewar population of over 400,000, has come to symbolize the misery inflicted by the war. The siege of the city has trapped perhaps 100,000 civilians with little food, water, medicine or heat.

As the battle raged there, Russian Defense Ministry spokesman Maj. Gen. Igor Konashenkov said Russian bombardment Thursday hit dozens of Ukrainian military targets, including troop concentrations in the east, an artillery battery near the eastern settlement of Zarozhne and rocket launchers near the southern city of Mykolaiv.

Five people were killed and dozens injured in shelling of cities in the Donbas over the past 24 hours, Ukrainian officials said, with shells hitting schools, apartments and a medical facility.

Ukrainian forces said they made some gains on the border of the southern regions of Kherson and Mykolaiv and repelled 11 Russian attacks in the Donetsk and Luhansk regions that make up the Donbas.

The war has devastated the country’s medical infrastructure, Zelenskyy said in a video link to a charity event in the UK Nearly 400 health care facilities have been damaged or destroyed, he said.

“There is simply a catastrophic situation regarding access to medical services and medicines,” in areas occupied by Russian forces, he said. “Even the simplest drugs are lacking.”

With the challenge of mine-clearing and rebuilding after the war in mind, Zelenskyy announced the launch of a global fundraising platform called United24.

At the same time, Poland hosted an international donor conference that raised $6.5 billion in humanitarian aid. The gathering was attended by prime ministers and ambassadors from many European countries, as well as representatives of nations farther afield and some businesses.