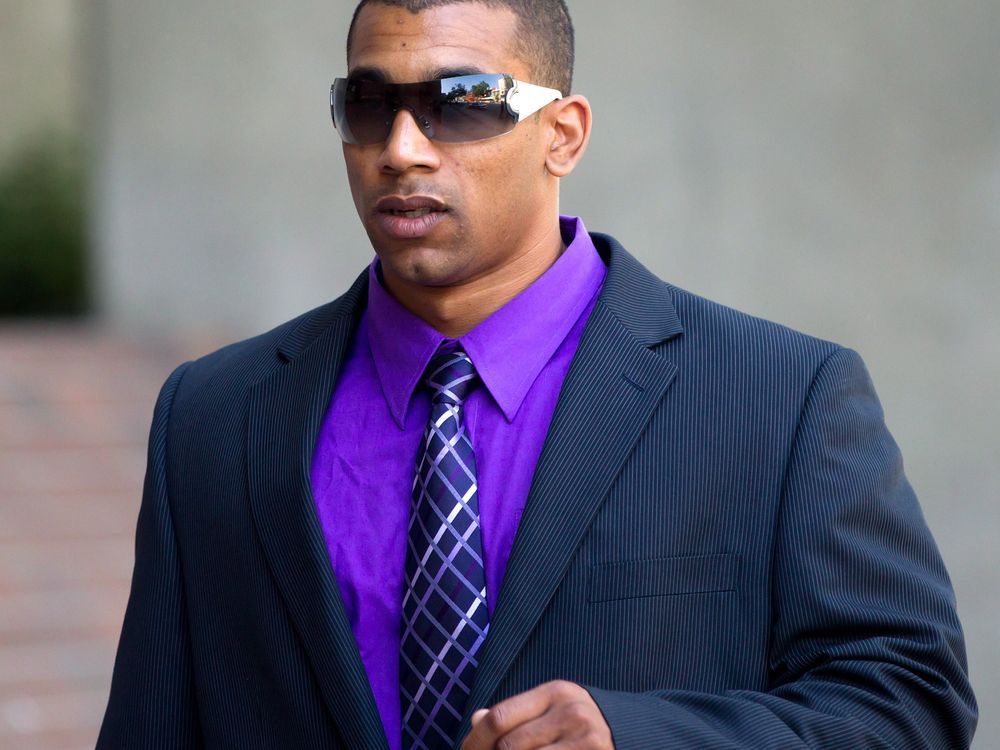 VANCOUVER — A former Canadian Football League wide receiver who viciously beat his ex-girlfriend, choked her to death, then staged the scene to make it look like an accident, should be sentenced to life in prison without a chance of parole for at least 15 years, a Crown prosecutor says.

Brendan McCabe told the BC Supreme Court that Joshua Boden tossed pills around Kimberly Hallgarth’s body, put some in her mouth and then stuffed it with socks as she lay dying at the bottom of the stairs at her home in Burnaby.

“We don’t even know how Ms. Hallgarth ended up at the bottom of the stairs,” McCabe said at the sentencing hearing Thursday.

GRAPHIC WARNING: The following details may be disturbing for some readers.

McCabe said Boden stomped on the woman’s neck and chest as she lay unconscious, tore out her fingernails, moved her body and wiped it with a towel before removing two garbage bags, which he suggested contained items related to the crime.

He called the murder “blunt, brutal and horrific” and said photos of the injuries endured by a vulnerable woman were the most shocking he’d seen in his career and had been inflicted by a “large, powerful man” who has not shown remorse .

Boden, 35, was found guilty last fall of second-degree murder in the 2009 death of 33-year-old Hallgarth in the Burnaby home that the court heard was a sanctuary she shared with her three-year-old daughter.

The former BC Lions player walked into court on Thursday dressed in a dark suit and stared directly at Hallgarth’s family in the gallery before taking a seat in the prisoner’s box, where he flipped through some documents.

McCabe said Hallgarth sent photos of her injuries from a previous assault and damage to her car to then Lions coach Wally Buono and Boden blamed her for ending his football career.

He said that while Boden maintains the racism he experienced as a Black person growing up in North Vancouver should be considered as a contributing factor at sentencing, there was no link to the crime.

McCabe presented a report from a psychologist showing Boden said he and his brother were the only two Black students at their school but that he was popular among his friends.

This would be the second time race and culture have been cited as factors at a sentencing hearing in British Columbia, he said. The judge in the first case did not accept it, I added.

A second-degree murder conviction carries a life sentence of 25 years but parole eligibility can be set starting at 10 years.

Boden’s lawyer has asked that he serve 12 years before being eligible.

Hallgarth’s family has described her as a bubbly and caring person who deeply loved being a mother to her daughter Hailey.

Vida Miller, Hallgarth’s former mother-in-law, told the court in a victim impact statement that she is caring for her granddaughter outside of BC, and that the now teenager’s life has forever been impacted by the torture her mother endured before she died.

She said Hailey returned home with her nanny the day her mother was killed but the woman could not open the door because Hallgarth’s body was blocking it.

The discovery of Hallgarth’s body had the nanny “screaming and crying in terror,” Miller told court over video link.

Hailey told court she would do anything just to have a conversation with her mother.

“He took the world from me,” she said via video link. “He took a piece of my life that I can never get back.”

Justice Arne Silverman told them both that their words were important for the public to know.

“I promise you that I’ll keep in mind what you read to me,” he said. “l’ll never forget it.”