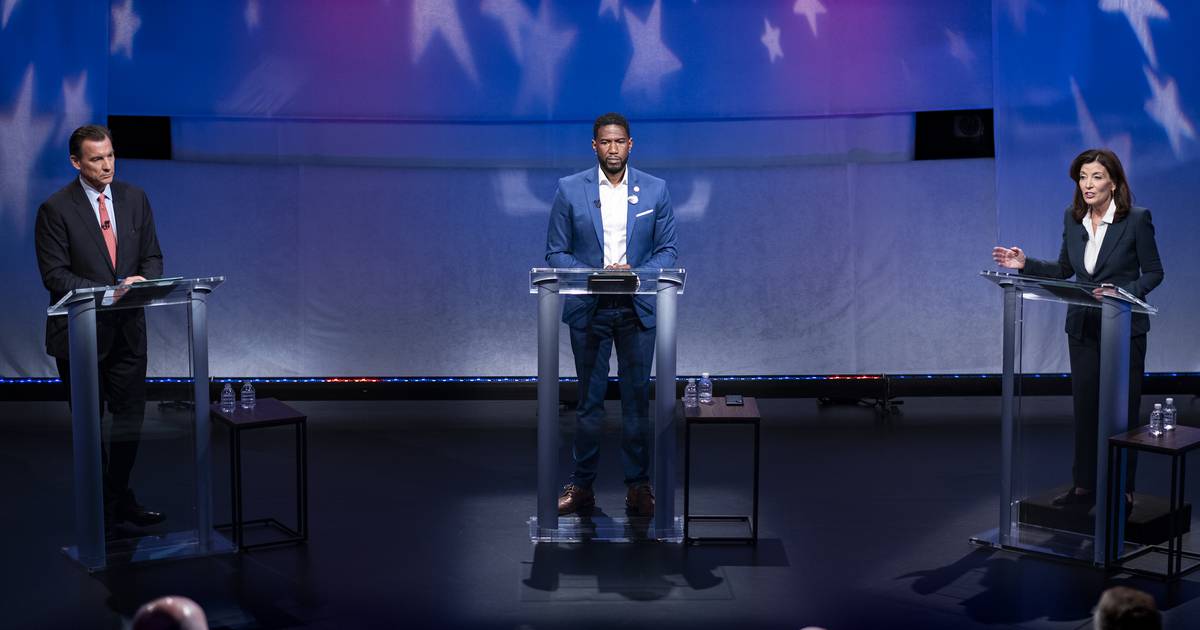 ALBANY — Crime and gun violence took center stage as Gov. Hochul and her de ella challengers, Rep. Tom Suozzi and Public Advocate Jumaane Williams, squared off against one another Thursday for a second and final time ahead of the Democratic primary.

During the hour-long debate, Suozzi tried to land some rhetorical punches on Hochul by accusing her of not doing enough to tackle the crime problem.

The governor defended her record and the state’s response to last month’s mass shooting in Buffalo, and shot down repeated questions from the Long Island congressman about her past policy positions on guns and favorable rating with the National Rifle Association.

“Excuse me, it’s my turn,” Hochul told Suozzi as he talked about her response at one point.

She argued that she has “evolved” when it comes to gun laws and touted recently signed bills prohibiting the sale of semiautomatic weapons to those under 21 and banning most body armor sales for civilians.

Williams, meanwhile, attacked Hochul on climate change and repeatedly linked her to her predecessor, disgraced former governor Andrew Cuomo, whom she served under as lieutenant governor.

Hochul noted that during the height of the pandemic, “you didn’t see me in any of the press conferences with Governor Cuomo.”

Cuomo was blamed by the state comptroller for underreporting deaths in nursing homes in the early stages of the pandemic.

The trio of candidates traded barbs and took turns touting their own accomplishments during the debate, which also tackled inflation, taxes, the cost of housing, subway safety and their favorite bagel orders.

The showdown comes just two days before early voting will begin in the state and a day after Mayor Adams finally threw his weight behind Hochul, endorsing her for a full term and praising her as “an amazing governor.” Primary day is June 28.

Hochul spent much of her time Thursday evening touting and defending her record since taking over the executive chamber last August when Cuomo resigned in the wake of sexual harassment allegations.

She repeatedly referenced bills signed into law addressing abortion, converting old hotels and commercial spaces into residential units and tax cuts included in the state budget as examples of what she has accomplished over the past nine months.

As an incumbent with a massive campaign war chest, Hochul is heavily favored in the primary, leading by double digits in most polls.

Still, Suozzi and Williams sought to win over voters by hammering Hochul on tax subsidies provided to the Buffalo Bills for a new stadium and her initial lieutenant governor pick, Brian Benjamin, who resigned earlier this year after being arrested on federal corruption charges.

Hochul in turn took a swipe at Suozzi, who is facing a House ethics investigation for failing to report stock trades.

“You’re not really in a position to lecture anybody about ethics, congressman,” she said.

As for their bagel orders: Williams said he’d go for lox, cream cheese, onions and capers, Suozzi’s go to is a poppy seed bagel and tuna fish, while Hochul is a fan of cinnamon raisin bagel with something sweet.