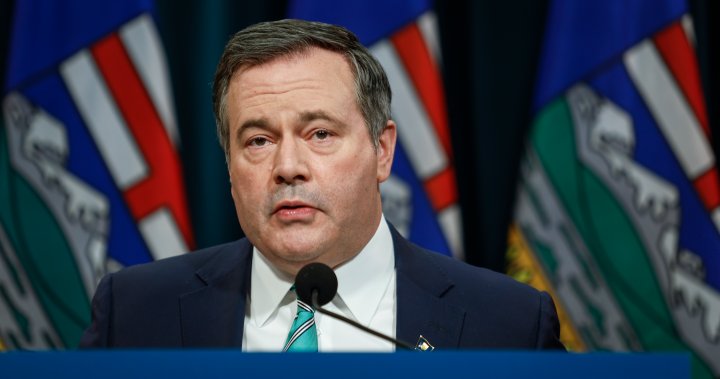 “It’s time for us to learn to live with COVID-19,” he said at a press conference, listing the challenges of the pandemic: disrupting livelihoods, dividing people and hurting mental health.

When the clock strikes midnight

Kenney said the exemption restrictions program has “outlived its useful purpose,” announcing that after Feb. 8 at 11:59 pm, it is done — citing what he called declining hospitalizations.

“None of this is an end to COVID-19. New variants will arrive, and we will still see times when cases are higher in the province,” Kenney said.

“We will likely also see times when there is additional pressure on the hospitals. But restrictions, mandates and those kinds of interventions will not and must not become a permanent feature of our lives.

“We are well-positioned to live with this virus, as we do with many other infectious diseases,” he said.

Think of the hospitals

Dr. Noel Gibney, professor emeritus in the department of critical care medicine at the University of Alberta, said restriction removal is premature.

“What we’ve heard today is wishful thinking and an element of COVID denial where the government is saying, ‘Really, this isn’t a problem anymore,’ while we still have a major Omicron surge causing pressure on our hospital systems,” he said.

“The numbers that Mr. Kenney presented today were of active cases in a system where the testing is really only of a tiny proportion of the number of people that actually have active COVID infections in the province at the moment, and so I think to even discuss those numbers, it’s misleading.”

The announcement is sending the wrong message, Gibney said.

“COVID is far from over… Our health-care system is still under severe stress,” he said.

“I think we need to get our hospitalizations significantly down from where they are now… We’re still running more patients in our hospital beds than we ever have before in any of the other surges.”

There are currently 1,623 people in hospital with COVID-19, according to Alberta Health, with 129 in intensive care.

“If we look back at some of the previous waves, the government used hospitalization numbers of 400 or 500 to make decisions about what public health measures would be added or removed,” Gibney explained.

“We’re actually significantly above those numbers now, and our system remains under profound pressure.”

“I don’t think we need to stay fixed with significant restrictions all the time. But once and when our hospital systems actually settle out and the pressure is relieved, I think that the restrictions should also be relaxed,” he said.

“But we need to be prepared to consider reintroducing them if, at some point later in this year or some other time in the future, we get another significant surge that puts people at risk.”

‘Still at the peak’ of hospitalizations

Dr. Stephanie Smith, University of Alberta Hospital physician and infectious disease specialist, said everyone recognizes that people are tired, but health-care workers also need to ensure they can provide safe and responsive care to all Albertans.

“We’re trying to manage the COVID cases, and we’re trying to still provide all the other services, but the reality is that we’re not up to 100 per cent for our surgeries,” she said.

“All those poor Albertans, there are many still waiting for their elective surgeries and to have all these restrictions removed with the possibility of having some increased transmission and maybe more hospitalizations, that’s just pushing those surgeries further down the line, which is not what we are trying to achieve.”

Smith said removing the vaccine passport is the “least worrisome restriction that has been removed.”

“When we were in the Delta wave, then it certainly provided some degree of protection for those who were fully vaccinated… but we know that with Omicron, there is less vaccine efficacy, and so I do think that the utility of the REP program is probably not as robust as it was,” she said.

“So I guess I’m not entirely surprised that that was removed.

“Some of the other recommendations, even in Step 1, seem a little bit surprising, I guess. Removing too many restrictions at once, I think, may make it a little bit more difficult for the health-care system to try to recover since we’re really still at the peak of our hospitalizations.”

Calgary Mayor Jyoti Gondek said people need time to digest the information, of which she said she and Edmonton’s mayor were given a preview. She noted the end of the REP means the end of the city’s Vaccine Passport Bylaw.

“Here’s the thing that’s the most confusing to me: the restrictions exemption program has been lifted… However, we just heard very clearly from the minister and the premier that alcohol consumption time cut-offs and closing times for restaurants are still under the restriction guidelines ,” she said.

“I’m pretty sure that the hospitality sector just got the exact opposite of what they wanted. Giving them more capacity doesn’t help them with the issue that they clearly stated was the service that they can actually offer.

“I’m looking forward to getting some clarity.”

Gondek wants to collaborate with the province to advocate for citizens’ needs.

“I would hope that we can have meaningful dialogue before Stage 2 comes into play,” she said.

“I’m especially interested in making sure that the channels of communication are open should we start to see hospitalizations increase and case numbers increase. This is a very fluid situation, and we need to make sure that our partners are able to enter into dialogue with us as we both need to.”

Coutts Mayor Jim Willett said he was hoping for more from Kenney’s announcement and said it likely won’t help resolve the impasse at the border where people are protesting restrictions and vaccine mandates.

“The premier’s an excellent negotiator in that nobody’s going to be happy with what he just announced. It’s either going to be too much or not enough, and it’s happening too soon or it’s not soon enough,” Willett told The Canadian Press.

Willett said he doesn’t know what the reaction is going to be among the people who are protesting, but he doesn’t expect any immediate disbanding of those at the border or those protesting at a checkpoint north of the village.

“I don’t anticipate that, no, not for the time being, and leaving masking in place until March 1 is not going to make anybody happy either,” he said.

“Anybody in the protest group or in rural Alberta is probably not going to be happy about that.”

Edmonton Mayor Amarjeet Sohi said he would not be available for comment until Wednesday but has previously said health rules must be based on scientific evidence and not put vulnerable people at risk.

– With files from The Canadian Press