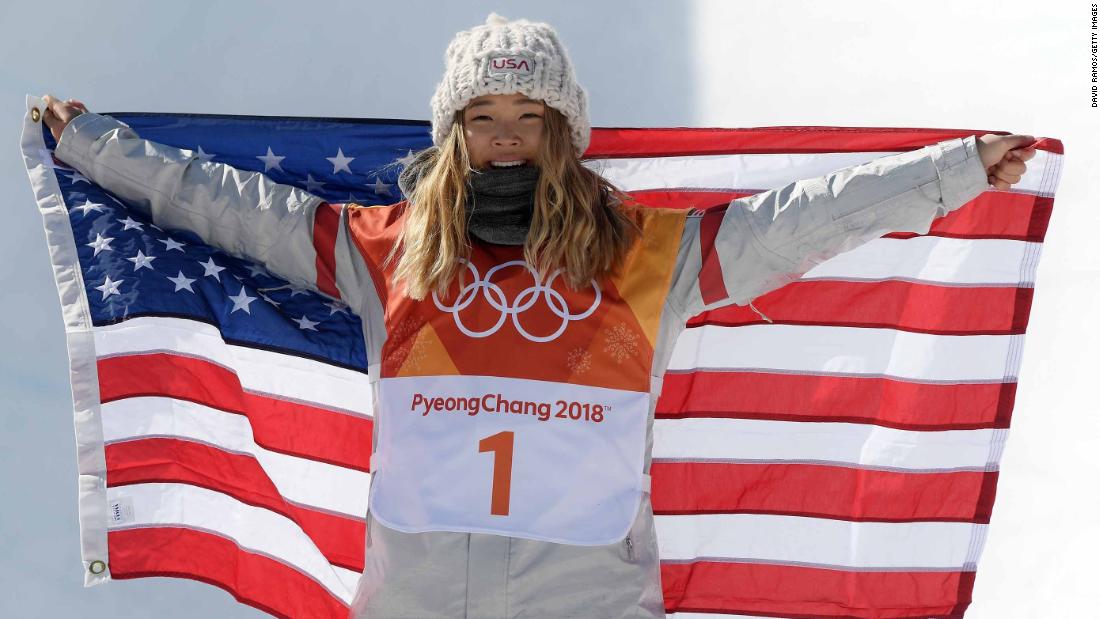 The snowboarding sensation already boasts five X Games gold medals, two world championships and, four years ago in Pyeongchang, announced herself to the world with a near-perfect score to win her first Winter Olympic gold medal aged only 17.

It was incredible halfpipe performance, executed under the intense pressure that came with being the favorite. The Winter Games have seen numerous slips and crashes over the years as athletes crack under the weight of expectation — but not Kim.

On the morning of the final, she seemed more concerned with what she was going to eat. In a tweet posted early that day, Kim said that she hadn’t finished her breakfast and was feeling “hangry.”

Her opening score was already good enough to secure gold, but Kim went on to put on a show for the crowd, scoring 98.25 out of 100 in her final run, finishing eight-and-a-half points clear of Chinese silver medalist Liu Jiayu .

During her final run, she became the first woman in history to land back-to-back 1080s in the halfpipe at the Olympics.

READ: ‘Oh my gosh, are you that snowboarder?’ Olympic gold medalist Chloe Kim goes to Princeton

‘Kind of a struggle for me’

However, Kim admitted that she struggled to deal with the fame and attention that came with her Olympic success.

She spoke to CNN in 2021 about her first day at Princeton, recalling that “everyone was kind of staring at me, taking pictures.”

“It was kind of a struggle for me. I just felt like I was never going to be able to adapt and stay because I just felt like everyone was watching me and knew who I was, when I didn’t know anyone,” she added.

“I kind of just expected to go there and compete and then just come back and go back to my normal, everyday life. But that wasn’t the case.”

In a recent interview with TIME magazine, which named Kim in their 2018 Time 100 list of most influential people following her Olympic victory, the American said she threw her gold medal in the trash when she got back to her parents’ house.

Kim admitted she “hated life” around that time and grew increasingly frustrated that she couldn’t do every day activities without being noticed, such as going to the bakery near her home without everybody staring.

“The minute I come home, I can’t even go to my goddamn favorite place,” Kim told TIME. “It makes you angry. I just wanted a day where I was left alone. And it’s impossible. And I appreciate that everyone loves and supports me, but I just wish people could understand what I was going through up to that point.

“Everyone was like, ‘I just met her, and she’s such ab*tch.’ I’m not ab*tch. I just had the most exhausting two months of my life, and the minute I get home, I’m getting hassled. I just want to get my f**king ham and cheese sandwich and go. “

After taking a break from competitive snowboarding while at Princeton, Kim is now hungrier than ever to get back on the Olympic slopes and defend her crown.

She comes into the Beijing Games as the overwhelming favorite to win halfpipe gold and is once again under intense pressure — even more than four years ago.

It was a long wait for her fans to see her back on the biggest stage, in particular those from America and her parents’ native South Korea, where she became a national icon following her win four years ago.

They weren’t disappointed either, as Kim unsurprisingly secured top spot in Wednesday’s halfpipe qualifying on her first run with a score of 87.75.

Those fans will be almost as eager to see her father, Kim Jong Jin, who became a viral star after he was pictured drinking a beer to celebrate his daughter’s victory.

Kim Jong Jin emigrated from South Korea to the United States in 1982 with $800 cash. He quit his job to support Kim’s career and would wake up at 1 am most mornings to drive his daughter to California’s Mammoth Mountain to train.

After Chloe secured gold in Pyeongchang, Jong Jin was picked up by the microphones saying “the American dream” as he pointed to himself.

Much has changed for Chloe Kim in the four years since she shot to global fame, but her singular focus of becoming Olympic champion remains the same.

Kim told CNN last year that she quit Princeton — for now — to go back to being “a full-time snowboarder” as she attempts to become the first woman in history to defend her Olympic halfpipe title.

She’s been making history throughout her short but illustrious career, so don’t bet against Kim making some more.