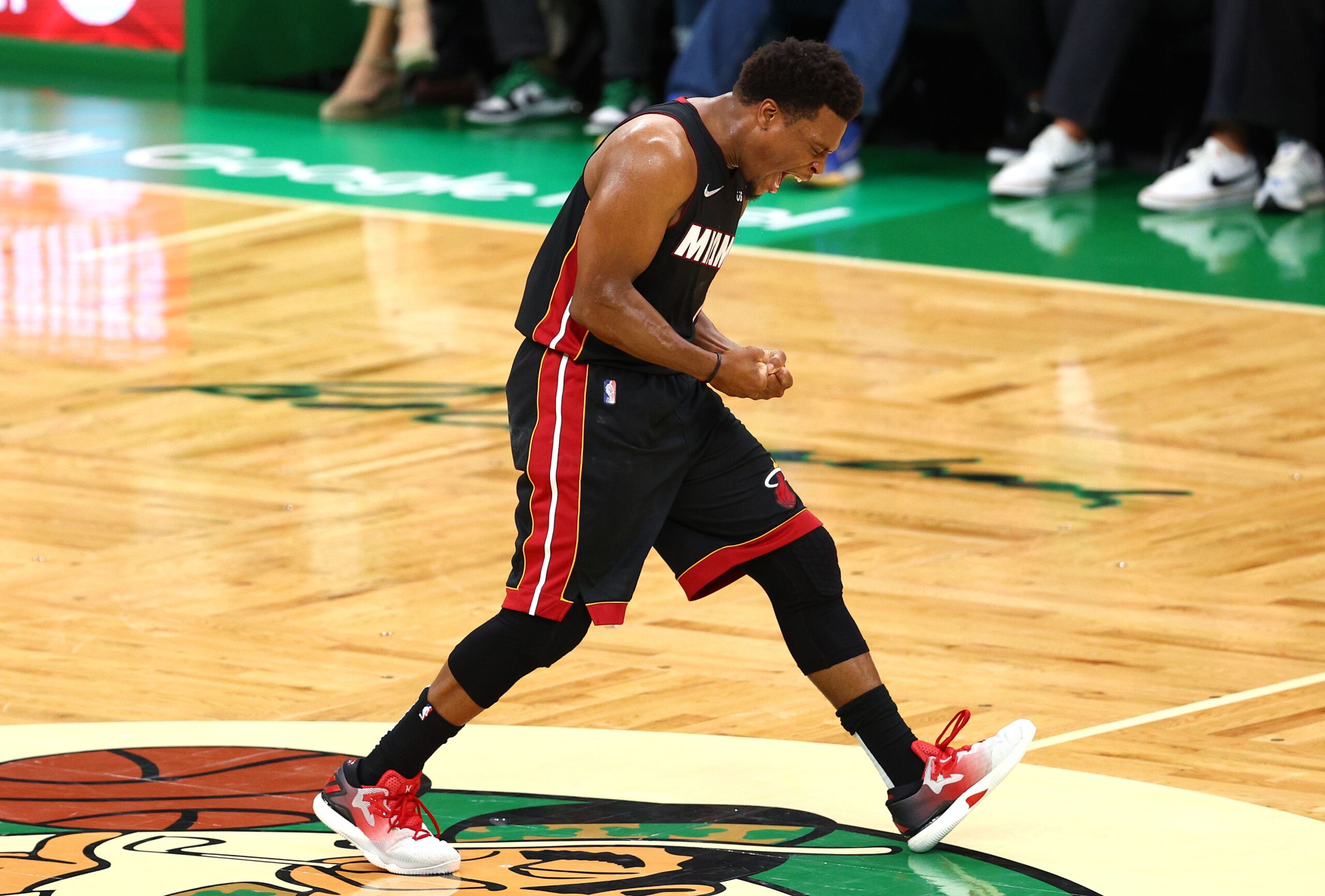 BOSTON — On the first possession of the game, Miami Heat point guard Kyle Lowry made a statement.

He snatched a rebound off a Boston Celtics miss and sped the ball up the court before finding Max Strus for an open 3-pointer.

Thus began an avalanche against a typically stolid Celtics defense. Miami’s dominant first quarter Saturday provided enough cushion to withstand Boston’s furious comeback and emotional in-game returns from Celtics players who had appeared to be seriously injured. But it was the return of two Heat stars that made possible Miami’s 109-103 win in Game 3 of the Eastern Conference finals.

The first star was Lowry, who has been absent for most of the playoffs because of a hamstring injury. The other was Bam Adebayo, who has only apparently been absent from the series. Adebayo’s 16 points in the first half matched his combined total in Games 1 and 2. He finished Game 3 with 31 points, 10 rebounds and 6 assists. Miami leads the series, 2-1.

“In the previous game, as everyone knows, they beat us like we stole something,” Adebayo said of Miami’s 25-point loss in Game 2. “That should wake anybody up.”

This has been an undoubtedly strange series. In 12 quarters, the Heat have outscored the Celtics only twice, yet they lead the series overall, two games to one. Those two quarters have been series-defining. The first was in the third quarter of Game 1, when the Heat outscored the Celtics, 39-14. The other was in Saturday night’s opening frame, when the Heat jumped out to a 39-18 lead. The matchup has mostly featured wild swings and stretches of uncharacteristically poor defense from two teams who typically count that as a strength.

“The margin for error on either side is so small that you’ve just got to stay the course through all the emotions and the ups and downs,” Heat coach Erik Spoelstra said.

The Heat had a new strategy for Game 3: Move faster.

Miami continuously pounded the Celtics defense in the first half by pushing the ball. That put the Celtics on their heels without time to adjust. In the case of Adebayo, sometimes that meant receiving a pass in the half-court, then immediately sprinting up the court and going to the basket against the slower Al Horford.

“I’ve seen Bam play like that a lot, but tonight was special,” Strus said. “Just because of all the noise and all the criticism that he’s been getting, for him to step up like that was huge.”

In the case of Lowry, pushing the ball meant receiving an inbounds pass after a Celtics basket and throwing it up the court to a streaking Jimmy Butler for a wide-open layup.

But it wasn’t just fast breaks: When Adebayo received the ball in the post, he would immediately pivot into the paint, rather than hold the ball and wait for the defense to respond. That was not how the Heat were accustomed to playing: During the regular season, they were near the bottom of the league in pace.

The Heat led by as many as 26 points in the first half. They entered halftime up by 15.

The Heat forced 23 turnovers, which helped them push for fast breaks. The Celtics’ ballhandlers couldn’t find space to dribble because the Heat defense was so adept at stripping the ball. Boston’s Jaylen Brown, one of the best slashing guards in the NBA, repeatedly lost the ball to Victor Oladipo, who had four steals off the bench. Lowry and Adebayo also had four steals each.

“We made it too easy on them in that regard,” Celtics coach Ime Udoka said. “Obviously, getting stops or scoring the basketball, they can’t get out and run to that extent, but scoring 33 points on our 24 turnovers is hard to overcome.”

Brown, who had seven turnovers, put at least some of the blame on officiating, despite Boston having 30 free throws to Miami’s 14.

“They let a lot of stuff go tonight, especially when I feel like I drive and I get to the basket. I feel like it’s two hands on me all the time,” Brown said. “I never get those hand-checking calls.”

The Heat even spoiled what would have been a dramatic story arc for the Celtics. In the third quarter, Marcus Smart, the Celtics guard who won the Defensive Player of the Year Award, left the game after appearing to sustain a thick right leg injury on a rebound attempt. He crashed to the floor, writhing in pain, and was helped off the floor and into the locker room.

Within minutes, I have reemerged from the tunnel to deafening roars from the Celtics crowd and checked into the game. He immediately hit a 3-pointer corner to cut the Heat deficit to 10. Then came another dramatic moment in the fourth quarter, when Boston’s best player, Jayson Tatum, also collapsed to the ground, holding his right shoulder. Like Smart, he had to be helped off the floor. But he, too, reemerged moments later.

The Celtics seemed primed for a storybook comeback. They ferociously attacked the basket, while an arena full of fans in green T-shirts shouted themselves hoarse. Brown’s 3-pointer with 2 minutes 40 seconds left cut the Heat lead to 1 in a game Boston had never led. All the makings were there for a Hollywood movie, almost assuredly starring Matt Damon and Ben Affleck.

A rescue plan for Miami came in the form of Strus, the undrafted third-year guard, who has taken minutes from higher-profile guards Duncan Robinson and Tyler Herro. I have answered Brown’s jumper with a 3-pointer of his own, deflating the Celtics crowd. Lowry, putting a period on his game-opening statement, provided the assist for the stat sheet and a separate one in the huddle.

“In the timeout, Kyle said, let’s run a pin-down for Max,” Strus said. “Let’s get him open. So when he said that, I had all the confidence in the world to step up and make a shot.”

Health will be a defining factor going forward in the series. Butler missed the second half of Game 3 because of knee inflammation. The Celtics were missing Robert Williams III, their starting center, because of knee swelling. He is considered day-to-day. Udoka said after the game that Smart had rolled his ankle and Tatum had a shoulder stinger.