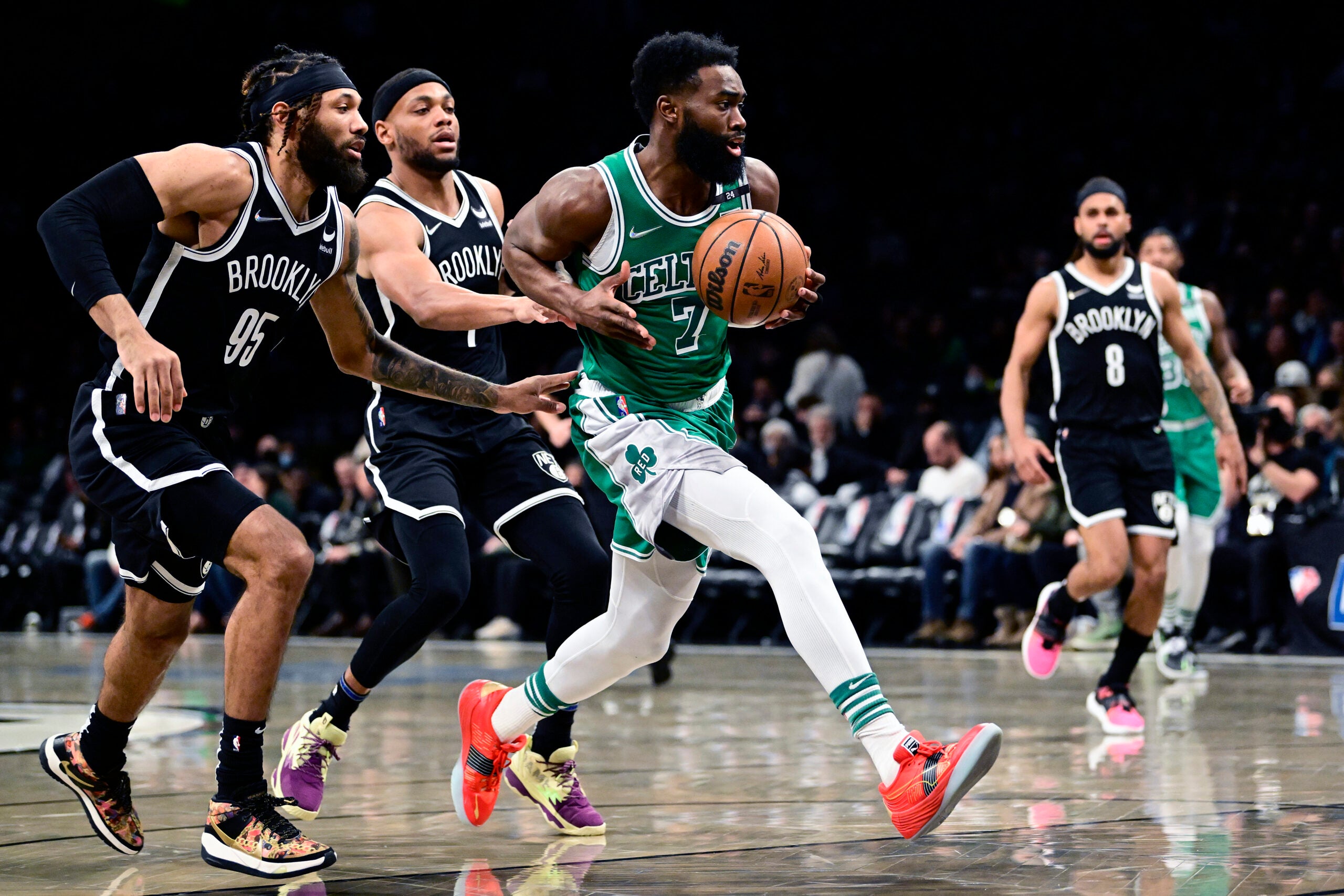 At some point, the Celtics will play a good team again, and we’ll learn more about them than we did on Tuesday against the Nets.

Tuesday’s 126-91 victory was a contest between teams headed sharply in different directions. The Nets, who have now lost nine games in a row, are a mess and are dipping quickly below the NBA’s play-in game x-axis. James Harden eyed the proceedings from the bench, nursing a hamstring injury. Kyrie Irving still isn’t allowed in the building. Kevin Durant is expected to miss a few more weeks with a sprained MCL. The remaining players looked like an NBA team in that they were all very tall individuals, but they didn’t really play like one.

The Celtics, meanwhile, are not messing around with bad teams, and they certainly weren’t going to mess around with a bad team jostling for position with them in the standings. The Celtics jumped out to a wipe-your-glasses 28-2 lead, and after a brief letdown during which the Nets cut the lead to 12, they raced back out to an advantage that stretched as high as 35 before they emptied their bench.

“I don’t know how often or if we’ve ever been to a good start like that before, but it felt good,” Jaylen Brown said. “But we knew that some of those guys were out. We wanted to take care of business early. We didn’t want to play around, give them confidence and let them linger into the game.”

At this point, it’s hard to make a strong argument for a deal before the trade deadline. Dennis Schröder is likely gone after this year, so he remains a possibility, but even he offers offense and a veteran presence at lead guard if Marcus Smart misses time. Grant Williams’ name cropped up in rumours, but why would the Celtics trade a shooter when a shooter is one of their needs?

“We had terrible spacing earlier in the year, and I think our spacing has improved tremendously,” Brown said. “I think that’s what has been the thing that has helped us out the most.”

If the Celtics believe they can make a run in any way — a run up the standings, a run in the postseason, whatever it might be — the last few weeks provide a reason to sit tight if a perfect deal doesn’t materialize. The potential of a team led by Brown, Jayson Tatum, Robert Williams and Marcus Smart was always tantalizing. Now, with a fully healthy roster, the Celtics are making a statement to their architect: Mess with the structure of your construction at your own risk, Brad Stevens.

“It’s a statement for all of us individually and for us as a team,” Smart said. “We all want to prove to not just to ourselves, to our teammates, we want to do what we know we can and that’s go out here and win these games.”

2. Brown finished with nine assists — two off his season-high of 11 — and Tatum added four. The Nets threw double-teams consistently at both players, who shared the ball between each other and their teammates at a high level.

“It’s the first time I feel like we’ve got me and JT together taking on that role, that responsibility of making sure we make the right plays, but night in and night out, teams are trying to take one of us out of the game,” Brown said. “So just being able to make the right plays and taking your time and learning and growing through those plays has been great.”

Tatum and Brown’s continued progress as a duo has been perhaps the biggest development over the last 10 games for the Celtics. When both players are beating double-teams, the Celtics’ offense is a tough cover.

Meanwhile, Celtics fans might like this quote from Brown postgame to TNT’s Chris Haynes when asked about his All-Star snub: “JT is going to hold it down for both of us. That’s what family does.”

3.This was a really nice move by Tatum (assisted by Brown).

“It’s a marathon,” Smart said. “It’s not about how fast you go. That’s just what it is. We’re hitting our peak and starting to click at the right time. I think we’re the only ones that really believed we still had an attainable chance of what we wanted to do, which is okay. That’s all we need.

“So, it’s impressive, but we’ve still got a lot of ways to go and we’re gonna continue to work and make sure we can just continue to get as good as we can on a daily basis.”

5. At one point in the second half, with the Celtics leading by 30, the TNT signal gave out. The network sent the feed back to their studio, which redirected to the much more exciting end of Suns vs. Sixers.

Was this an intentional plot by TNT? Consider this evidence:

Of course, as MassLive’s Souichi Terada pointed out:

At the very least, the guess here is TNT wasn’t exactly upset by the turn of events and may have let the feed linger on the better, more entertaining game. They probably made the right decision.

Get the latest Boston sports news

Receive updates on your favorite Boston teams, straight from our newsroom to your inbox.