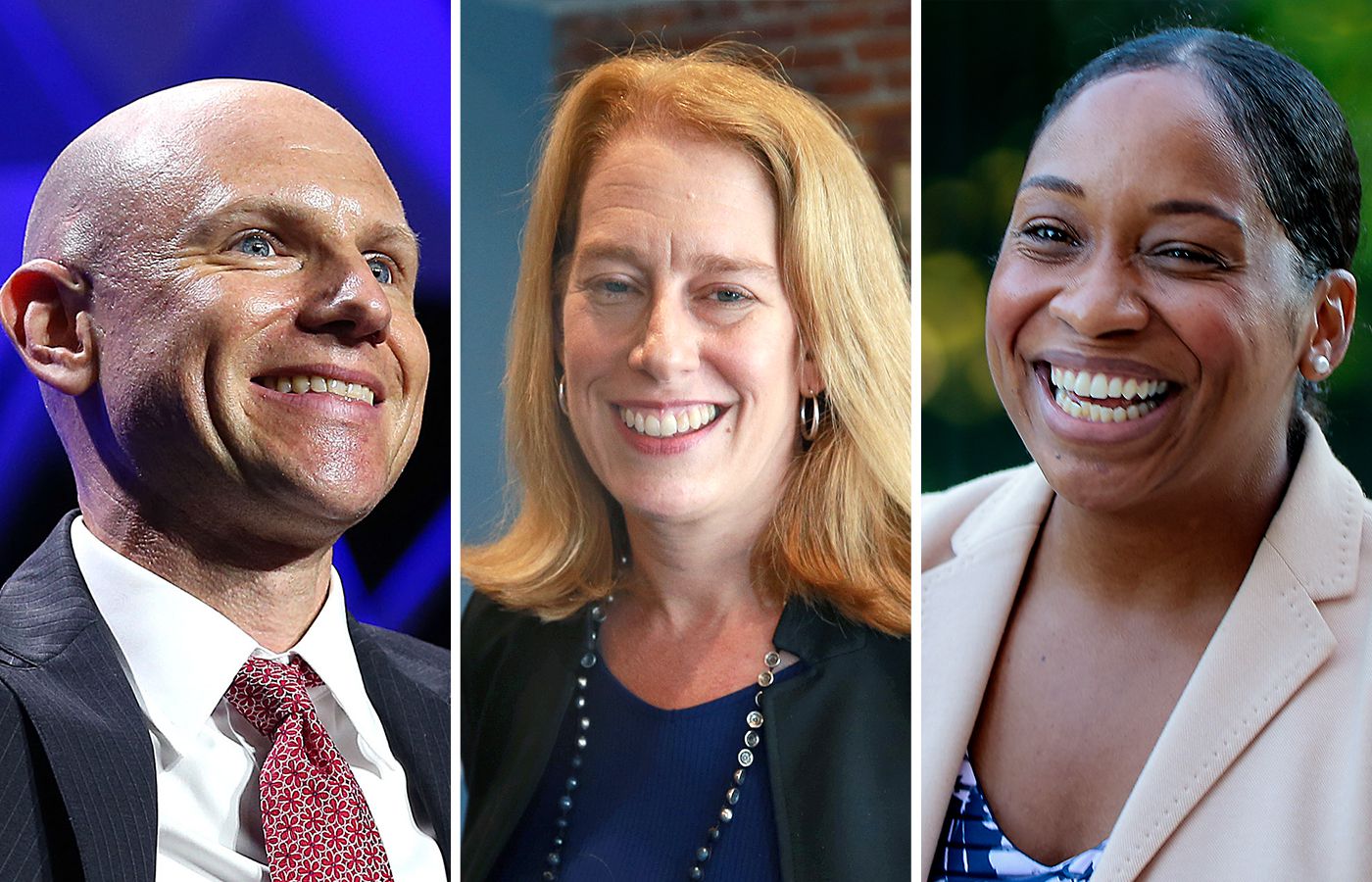 In the race to fill Maura Healey’s shoes as a popular Massachusetts attorney general, the three candidates who have thrown their hats in the ring need to stand out.

Yet despite having very different backgrounds, in interviews with GBH’s Jim Braudie, candidates Andrea Campbell, Quentin Palfrey, and Shannon Liss-Riordan seemed to agree on nearly every issue.

Former Boston City Councilor Andrea Campbell had a historic six years on the Council, becoming the first Black woman to be elected president of the Council in 2018. She also fared well in Boston’s mayoral race last year, coming in third.

During her interview with Braudie, she said her unique background is what makes her the best person for the position of attorney general. She cited growing up in a house torn apart by poverty and incarceration, working as an education attorney and as Gov. Deval Patrick’s attorney, and her legislative experience as being formative.

“I’m really excited for my candidacy, and to get out there and tell folks what the AG’s office can do in their daily lives,” she told Braudie.

Quentin Palfrey, who worked as an attorney in both the Obama and Biden administrations and is a former state prosecutor, answered similarly, saying he believes his experience has prepared him well for the role of attorney general.

“I’ve seen firsthand how much impact the AG’s office can have on the issues that matter the most,” Braudie told. “The AG can bring consumer protection cases against predatory lenders and scammers, can bring much needed urgency to the fight against racial injustice and the climate crisis, and the fight for our democracy.”

Shannon-Liss Riordan, a labor attorney who has taken on corporate giants such as Uber and Amazon, also cited her experience as to why she’s the best candidate for attorney general.

“I have spent my career fighting the toughest battles, taking on the biggest challenges against some of America’s largest corporations,” she told Braudie. “I have fought for workers and I have won, and I’m excited to take this work to the people as the next Massachusetts Attorney General.”

When asked if they would do anything differently from Healey as attorney general, all three praised her work.

“I am very excited to expand on the excellent work she’s done,” Liss-Riordan said. “I am excited to double down on fighting polluters who are destroying our environments, corporate bad actors who are taking advantage of workers and consumers fighting for reproductive rights, and making sure that our economy is a fair economy that is including everyone.”

But Campbell told Braudie she has a unique lens through which she would approach the office of attorney general, especially when it comes to racial disparities in areas such as the criminal justice system and access to healthcare.

“And so for me, taking this holistic approach to the families, which are suffering, frankly, right now in the Commonwealth, is also critically important.”

Braudie mentioned to Palfrey and Liss-Riordan that Healey had recently been criticized for not doing enough to combat government corruption, asking whether they believe that’s a fair criticism.

While neither said they necessarily agreed with the criticism, they said they wanted to build upon her work by increasing scrutiny of government actions.

“This is a moment in time when public faith in government is at a low ebb, and I do think that the attorney general should help to provide accountability so that people can trust that the people working for them are doing so in their best interest, Palfrey said.

All three candidates took a strong stance against racism, saying that as attorney general they would fight it across many areas, from criminal justice to healthcare to voting rights.

But while Palfrey and Campbell said they are in favor of ending qualified immunity, a legal precedent that protects government officials — and is most commonly used to protect police officers — from accusations of abridging constitutional rights, Liss-Riordan did not answer the question.

She did, however, say she would consider declining to represent the state of Massachusetts if she felt the state was on the wrong side of a lawsuit.

All three agreed that Massachusetts governmental bodies should not consider themselves exempt from public records law, which is the stance that all three houses of state government currently take.

“Transparency is key to our democracy, and I will do everything I can to make sure that we have a transparent state government on all levels,” Liss-Riordan said. “Sunshine is the greatest remedy to make sure that the people are involved and know what their government is doing.”

Early polling from MassINC Polling Group suggests that Campbell is in the lead in the race to become the next Massachusetts attorney general, with 32 points. Liss-Riordan and Palfrey received significantly less support, garnering just three and two points, respectively.

However, this race is far from decided, as 54% of people polled said they were undecided or declined to answer.