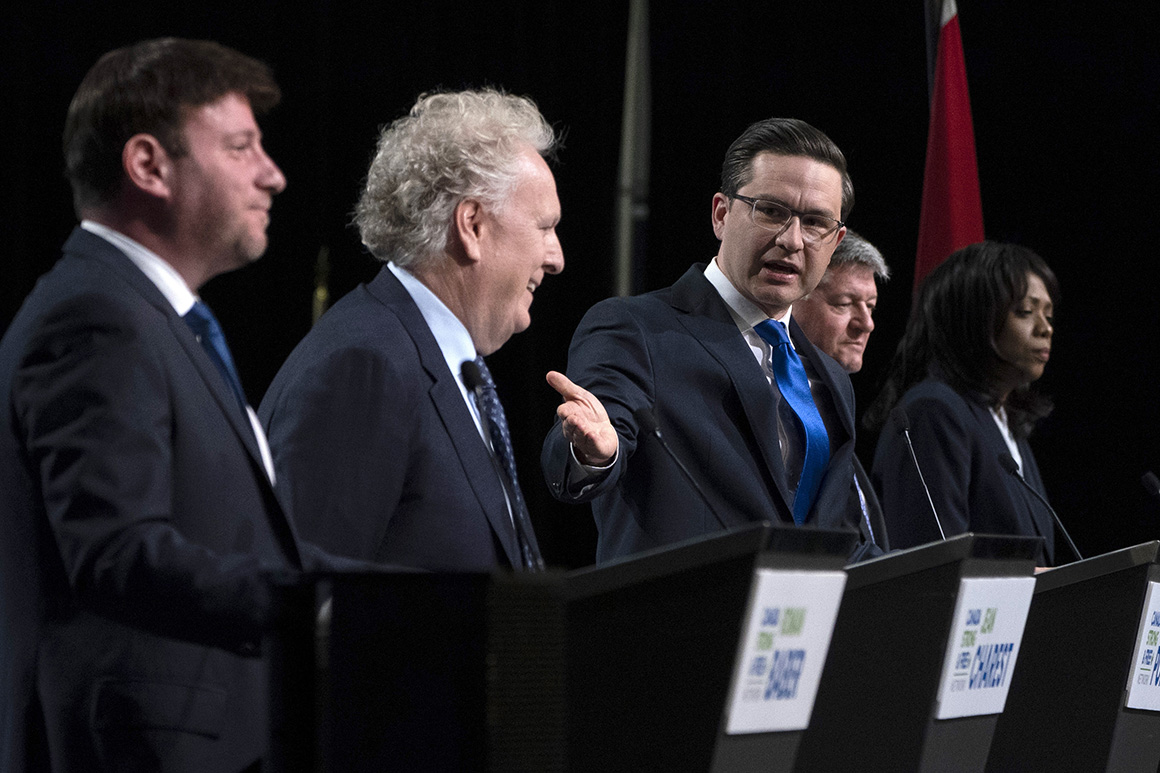 Early on in the debate, several candidates simultaneously demanded rebuttals of each other’s claims. One of the moderators, incoming CSFN President Jamil Jivani, invited them to have it out. “If you’d like to mix it up, let’s go,” he said.

And so they did.

The evening’s two primary combatants were Poilievre, an MP who represents an Ottawa riding who is the perceived frontrunner, and Charest, a former Quebec premier.

Their campaigns have been sniping at each other on social media for months. Finally, standing side by side on stage, the two men had a chance to air their grievances in front of a live audience of conservatives.

Here are five takeaways from the debate that offer hints at where the race might go next. There’s less than a month until June 3, the deadline to recruit party members who can cast a ballot. The winner will be announced Sept. 10.

Aitchison, an MP from rural Ontario, acknowledged O’Toole’s pitch lacked consistency — a likely nod to O’Toole’s reversal on a key gun control policy. Charest and Lewis, an MP from the same province, insisted the party needed to return to its core principles. Baber, a member of the Ontario legislature, complained that many Canadians “weren’t sure where we stood.”

Poilievre, who also represents an Ontario riding, bypassed O’Toole’s failures to focus on his own strengths. He boasted about winning seven consecutive elections in a “big multicultural city” — the Ottawa suburbs, plus outlying rural areas — crediting his “impeccable record” as a low-tax, low-inflation candidate.

Takeaway 2: Leslyn Lewis has her guns trained on Pierre Poilievre

Lewis is the lone champion of social conservatives in this race, and her opponents know those supporters will influence the outcome of the race. They barely mentioned her name, let alone criticized her proposals.

If she drops off the ballot, those votes will be up for grabs on the party’s ranked ballot.

But Lewis wasn’t a peacemaker on Thursday. She challenged Poilievre’s support of the Freedom Convoy. “You were not one of the loudest voices,” she said. “You did not speak up until it was convenient for you to speak up.”

Lewis also questioned the frontrunner’s bona fide social conservative. “Pierre Poilievre has run from the media the last few days because he doesn’t want to declare whether he’s pro-life or pro-choice,” she said. “As a leader, he’s going to have to declare that.”

In a short statement sent to POLITICO, Poilievre’s camp committed to never legislating against abortion — a position identical to former Prime Minister Stephen Harper during his nine years in power.

Lewis’ camp has always claimed her base of support extends beyond social conservatives to the same freedom-loving party members turning out to Poilievre rallies all across Canada. Expect her to keep her guns trained on her caucus colleague.

Anyone who’s watched Poilievre at a parliamentary committee recognizes his bulldog tactics. He pelts witnesses with simple questions until they either answer or the chair suspends the meeting.

Poilievre employed the same technique Thursday, demanding to know how much the Chinese telecom giant Huawei had paid Charest for his consulting services. “How much? How much? How much?” Charest refused to respond.

The former premier’s work for Huawei, which coincided with the house arrest of CFO Meng Wanzhou as she fought potential extradition to the United States, has dogged him throughout the campaign. He claims to have played a role in brokering the release of Michael Kovrig and Michael Spavor, two Canadians who were arrested shortly after Wanzhou and kept behind bars until they were freed last September.

Charest, a seasoned debater after a lifetime in politics, never backed down from Poilievre.

But he did walk into another trap. It’s a truism in politics that candidates shouldn’t repeat the substance of their opponents’ attacks. Poilievre has for months labeled Charest a Liberal premier who never governed as a conservative.

The former premier calmly put a question to the room. “Can I take a moment to lay to rest this accusation of being a Liberal? Please, bear with me, bear with me.”

To his left, Poilievre was smiling. “It’s not your name as a party that was Liberal,” he said. “It’s your record of more debt, higher taxes and more expensive government that was Liberal.” Point to Poilievre.

Takeaway 4: The Freedom Convoy was a popular cause

“All we do is yell and scream at each other,” he said after a heated exchange between Poilievre and Charest. “What Canadian is going to trust this lot?”

Most of those appeals for sanity scored applause, but rarely was it rousing. Candidates were more vocally rewarded when they went for the jugular.

It might’ve been a room full of white-collar conservatives, but they loudly supported the Freedom Convoy. Many cheered anyone who opposed lockdowns.

At one point, Charest spun Poilievre’s advocacy for the Freedom Convoy as support for illegal protests. That remark was met with the night’s only sustained round of booing.

Takeaway 5: Never mind the room, candidates are out for clips

Charest scored a blow against Poilievre on Bill 21, the Quebec law that bans public servants, including teachers, from wearing religious symbols at work. Charest accused Poilievre of telling a French-language interviewer that he wouldn’t intervene if a legal challenge of the law found its way to the Supreme Court.

Poilievre said he opposed the law, but didn’t directly deny Charest’s claim. The conference attendees in the room appeared less enthused about that exchange, but Charest wasn’t playing to them — his target audience was across the river in Quebec.

Next stop: All five candidates, along with Brown, will gather May 11 in Edmonton for the first “official” party debate. Tom Clark, a former journalist, will serve as moderator.