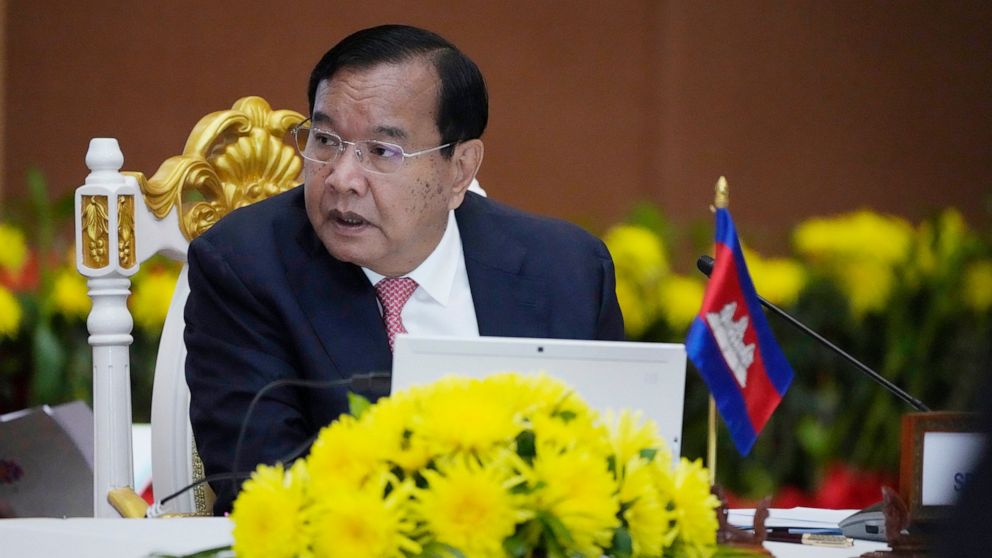 PHNOM PENH, Cambodia — The Association of Southeast Asian Nations agreed to a meeting Friday in the Cambodian capital, Phnom Penh, in a fresh effort to organize humanitarian assistance for strife-torn Myanmar.

The hybrid meeting, which some participants joined by video, is being attended by high-level representatives from Myanmar and the other nine member states of ASEAN, its external partners, United Nations specialized agencies and other international organizations. Cambodia is the current chair of ASEAN.

The meeting is part of an attempt to revive a five-point consensus on Myanmar reached by ASEAN in April last year. The effort comes in response to violence that has swept Myanmar after the military in February 2021 seized power from the elected government of Aung San Suu Kyi and used lethal force to quash opposition to its takeover.

Myanmar agreed to the consensus but has made a scant effort to implement it. Its stonewalling led fellow ASEAN members to block Myanmar’s leaders since last October from attending major meetings of the regional grouping.

At the same time, armed resistance to military rule has increased to the extent that some UN experts say the country is now in a state of civil war. Myanmar’s military has launched large-scale operations, including air strikes in several areas of the country, generating large numbers of displaced people.

In an effort to eliminate havens for armed opponents, the government’s tactics have included burning down entire villages and restricting access to essential supplies such as food.

Some 924,800 people remain displaced across Myanmar as of April 25, including 578,200 people who have fled their homes as a result of conflict and insecurity since the military takeover, according to an assessment by the UN Office for the Coordination of Humanitarian Affairs.

“Humanitarian access to conflict-affected and displaced people remains heavily restricted and there are significant gaps in assistance to these communities despite continued efforts by humanitarian partners and local organizations,” it said.

Even if access to those in need was eased, relief efforts face funding challenges. Myanmar is one of the region’s poorest countries, and its economy has been battered by the COVID-19 pandemic and the political upheaval, making foreign assistance an imperative.

The UN’s 2022 Humanitarian Response Plan seeks to reach a record 6.2 million people and requires $826 million, the world body announced last month. To date, it is only 4% funded, it said.

Critics of Myanmar’s military government suggest that any attempt to implement the five-point consensus is a waste of time.

”ASEAN’s credibility depends on its ability to act in accordance with the reality of the situation in Myanmar,” the non-partisan group ASEAN Parliamentarians for Human Rights said in an open letter last month to ASEAN leaders. “The group cannot expect the military to abide by the terms of the Five-Point Consensus or to any international or humanitarian norm for that matter.”

The lawmakers’ group said it is “imperative that the member states escalate measures to put real pressure on the military to stop it from brutalizing its own population and turning the country into a failed state.”

Measures it suggested include the suspension of Myanmar’s membership in ASEAN, regional travel bans for Senior Gen. Min Aung Hlaing and members of his ruling military council and targeted sanctions against them that include their sources of economic support. Western nations such as the United States and Britain have already implemented similar bans and sanctions.

“Myanmar’s junta has spent the past year committing atrocities in utter disregard for its commitments to ASEAN,” said Elaine Pearson, acting Asia director at Human Rights Watch. “The ASEAN countries leading on Myanmar – Indonesia, Malaysia, and Singapore – should immediately alter their course to focus on protecting people’s rights and freedoms rather than helping the junta remain in power.”

Critics of Myanmar’s military believe any breakthrough toward resolving Myanmar’s crisis must ultimately involve the country’s self-styled National Unity Government, which is the main organization representing opposition forces. The group, set up by elected lawmakers who were denied their seats by the army takeover, considers itself the country’s legitimate government and has widespread public support. The country’s military leaders, however, have officially designated it an outlawed terrorist organization and refuse to engage with it.

The open letter from the lawmakers’ group called on ASEAN “to immediately and publicly meet with the NUG,” an appeal that met with a positive response on Twitter from Malaysian Foreign Minister Saifuddin Abdullah. He said he had informally met via video with the NUG foreign minister ahead of a conference of ASEAN foreign ministers in February.

Saifuddin later said Malaysia would propose that ASEAN engage informally with the NUG because no progress had been made in a year in implementing the five-point consensus.

“We are not proposing for ASEAN to recognize other governments, but such informal engagement may be conceivable, especially on how humanitarian aid to the people of Myanmar who are still in their country can be delivered,” he said.