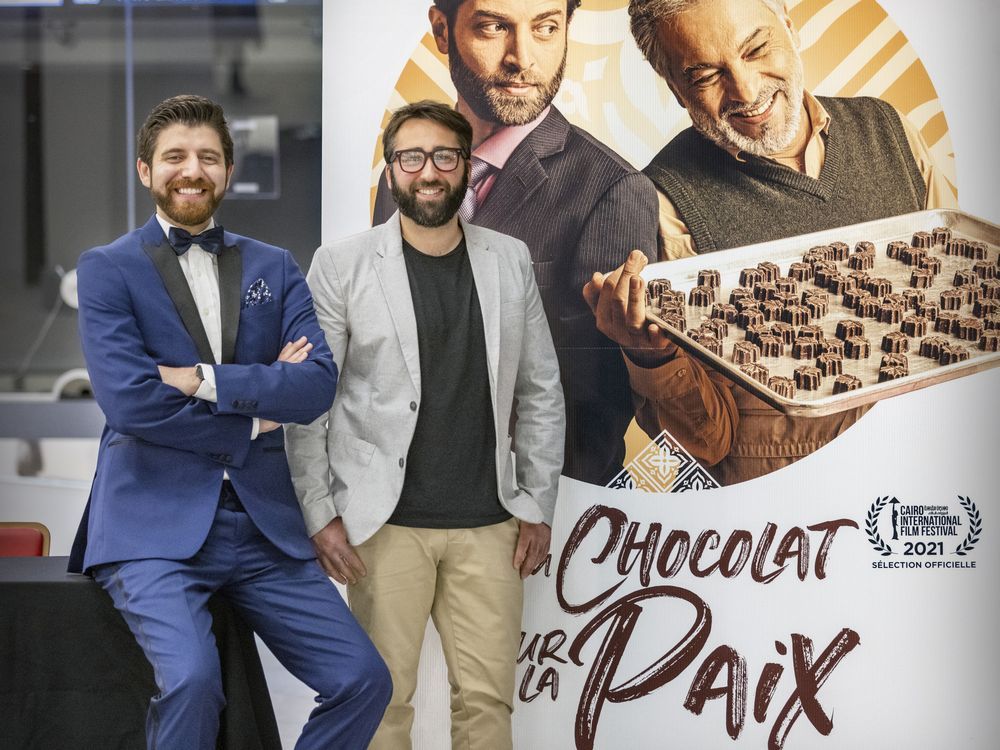 Tareq Hadhad had come from away. Far, far away, from Syria to a Lebanese refugee camp to Antigonish, NS

Hadhad is the real-life inspiration behind the film Peace by Chocolate, which, like the 9/11-set Come from Away, showcases the warmth and generosity of Maritimers. Yet while the story takes place in Antigonish, where some exteriors were shot, the film — opening Friday — was made in Montreal, largely with local actors and crews. (Montreal has doubled on screen everywhere from Moscow to Mars, but Antigonish has to be a first.)

Hadhad and his family had to flee Syria for a Lebanese refugee camp after his dad’s chocolate factory had been bombed. Hadhad (played by Montrealer Ayham Abou Ammar) was the first in the family to be given refuge in Antigonish. He had dreams of pursuing a career as a doctor. However, his father of him (powerfully portrayed by recently deceased Syrian actor Hatem Ali), who was to arrive a little later, had dreams of summarizing his career as a chocolatier with his son by his side.

And so viewers will get a taste of both the sweet and bitter sides of chocolate in this charmingly captivating film.

Despite the kindness shown to him and his family by his genial landlord Frank (played by Montreal stage vet Mark Camacho), Hadhad was initially skeptical of life in Antigonish when he first arrived there in December 2015. He had desires of big-city life in Toronto. Nor did the winter help. But he was soon to learn that he could handle both winter and living away from Hogtown. Chocolate helped pave the way.

“It turns out that chocolate is really universal,” Hadhad says. “My father was actually the best chocolatier in Syria with the second largest chocolate factory in the country. Now he has joy again.”

With the way things are now going for his dad’s Peace by Chocolate brand, he just may emerge as one of the best chocolatiers with one of the biggest factories in this country.

In Montreal for an advance screening of the film at the Cineplex Forum, Hadhad, attired in a stylish tux, has a matinée-idol presence and looks like he could have played himself in the film.

He recalls when he first got the call telling him he would be going to Antigonish: “I had no idea where Nova Scotia was on the map. They told me I was flying first to Halifax, but I said I wanted to stay in Canada. They had to tell me Halifax was in Canada. And when I arrived in Antigonish, I was greeted with open arms and warm hearts. I soon felt like I belonged there.”

Regardless, he did have to deal with culture shock and learn that snowball-tossing wasn’t really Canada’s national sport.

Nor has Hadhad been the only Syrian refugee so embraced by the good burghers of Antigonish. The SAFE group — Syrian-Antigonish Families Embrace — has welcomed over 250 and counting to the community since 2015.

“This kindness shown to all of us quickly made me realize that life offers a field of possibilities and chances,” says Hadhad.

He stops short of uttering that classic Forrest Gump line that “life is like a box of chocolates,” but it would be rather apt in this situation.

Hadhad has had to put his medical dreams on hold for now as he not only assists his dad in their ever-burgeoning chocolate biz still based in Antigonish, but he has also become a much-in-demand motivational speaker on acclimatizing himself to life in Canada.

“It’s all about priorities,” he says. “My priority has been about giving back to Canada, because the country has given our family a life we ​​never would have thought possible. My goal is to tell others that refugees don’t come to Canada empty-handed, that they have skill sets and can contribute here.

“As for me, it’s never too late to become a doctor, but I’ve also come to really appreciate that the world could use more peace and more chocolate.”

Peace by Chocolate marks the first dramatic feature for its Nova Scotia-born and “occasional Montrealer” director Jonathan Keijser, previously best known for his 2016 Bagels in the Blood doc on Fairmount Bagel.

“I had been following the Hadhad story when I first heard about it and was really touched, because I could relate to that outpouring of community support,” says Keijser, also the film’s co-writer and co-producer. “When I was 16, growing up in Halifax, my father died and the community came together to help me get through this really tragic incident. That’s sort of similar to the way the Antigonish community took in people they didn’t know, like Hadhad’s family, and helped put them on their feet.”

There’s a reason the film has won over 15 audience and jury awards on the festival circuit.

“It may be based on the Hadhad family,” Keijser says, “but there are so many other people’s stories about hopes and dreams within that.”