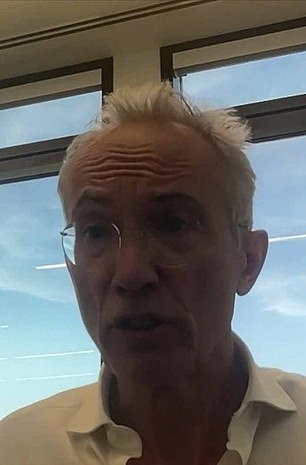 A billionaire Tory today pulled the plug on donations while Boris Johnson is in charge saying the Prime Minister has ‘passed the point of no return’ and his ‘moral authority’ to lead the country has gone because of Partygate.

The BBC said Mr Armitage has told the Conservative Party he will not be giving it any more money as things stand, but he plans to remain a member.

Questioning Mr Johnson’s motives he said: ‘I feel politicians should go into politics to do good for their country. And that is the overwhelming reason to be in politics. I don’t think it’s about your own personal sense of getting to the top of a snakes and ladders game’,

And he told BBC Newsnight that leaders ‘should leave’ if they lose their ‘moral authority’, adding: ‘I find the lack of honor inherent in modern politics incredibly distressing’.

Asked if Mr Johnson was ‘past the point of no return’, he replied: ‘Well, personally yes’, accusing him of failing to take ‘personal responsibility’ for the chaos in No 10 including at least 12 boozy parties in lockdown.

In more eviscerating comments about the PM’s decision to change his top team, Mr Armitage said: ‘If I’m failing and I’ve done a few things wrong, oh gosh I’m going to change my advisors. God above. What about a sense of personal responsibility?

He added sarcastically: ‘You know “I’m going to change my chief of staff and it will all be fine”. Oh really?’

In response to Mr Armitage, a senior Downing Street source insisted that the Prime Minister remains ‘entirely focused on delivering for the British people’.

Mr Johnson will face MPs in the Commons on Wednesday after carrying out a limited reshuffle which saw Mark Spencer moved from chief whip to Leader of the Commons, with the previous holder of that role, Jacob Rees-Mogg, becoming Minister for Brexit Opportunities. 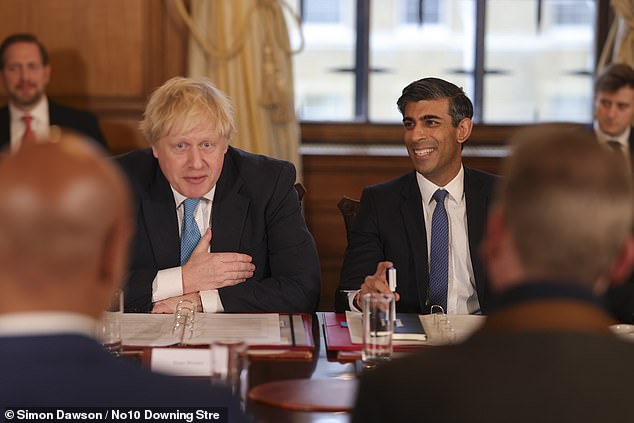 It came as the Prime Minister circled his wagons yesterday with a mini-reshuffle in which ultra-loyal, mainly male lieutenants gained key roles.

Former Europe minister Chris Heaton-Harris was appointed chief whip to curb rebellions by Tory MPs and head off a vote of no-confidence in the Prime Minister.

A no-confidence vote in Boris Johnson’s tottering authority could happen within days despite MPs being away on recess, it has emerged.

The 1922 Committee of Tory backbenchers, which oversees the process for removing a Conservative leader, has the ability to hold proxy votes — meaning that should the threshold of 54 letters be met next week, a vote on the Prime Minister’s leadership could still take place even if MPs cannot attend in person.

Crucially, it means that Mr Johnson, who has faced calls to quit over his handling of the ‘Partygate’ drama which has gripped Westminster, could face a leadership rebellion in a matter of days despite his recent attempts to ‘reset’ his chaotic administration.

Mr Johnson yesterday mounted a ‘defensive’ mini-reshuffle in which he moved arch-loyalists within cabinet to shore up support on the lockdown-sceptic right of the party.

Last night it emerged that the Tory leader is planning a full reshuffle this summer as he prepares for a general election in 2023 and 2024.

However, the Tory leader will also have to brace himself for another political earthquake this week as Sir John Major prepares to accuse Mr Johnson of corroding trust in politics in a speech called ‘In democracy we trust?’ at the Institute for Government think tank.

The former Conservative prime minister is also likely to criticize the behavior that led to accusations of hypocrisy being leveled at Number 10 officials who drank alcohol and socialized while the public was under Covid restrictions.

After lengthy wrangling and an appeal from Boris Johnson, housing minister Chris Pincher was persuaded to return to his former role as deputy chief whip.

His appointment completed a ‘reset’ reshuffle in which loyalist ministers were handed new roles and no one was sacked, avoiding adding to the tally of disgruntled former ministers on the backbenches.

The moves are designed to bolster a Tory whipping operation described by one Cabinet minister as ‘broken’.

Both men played a key role in the so-called shadow whipping operation established by the PM last month to persuade mutinous Tories not to submit letters of no-confidence.

But one senior minister predicted they would find it difficult to restore order, adding: ‘It’s like bringing in a new football manager to gee up a struggling team.

‘It might help for a bit but it doesn’t deal with the fundamental problem, which is that it looks like the party at Westminster is becoming ungovernable.’

He and Mr Spencer will both still attend Cabinet, despite their involvement in the disastrous decision to try to change Commons sleaze rules to protect former minister Owen Paterson from lobbying charges.

Mr Rees-Mogg had acknowledged his role in the episode, which triggered a fall in Tory fortunes, saying he ‘made a mistake’. The former head of the European Research Group of Tory MPs remains popular on the Tory Right.

He is also one of the few Cabinet ministers to publicly go out to bat for the PM during the Partygate crisis. His ministerial salary from him will double from £34,367 to £71,673.

Mr Spencer is also embroiled in an investigation over disputed claims that he told MP Nusrat Ghani she lost her ministerial role because her Muslim faith made people feel uncomfortable.

In another endorsement of loyalists, Paymaster-General Michael Ellis, who has repeatedly defended the PM over Partygate, was handed a seat at Cabinet.

The reshuffle was male-dominated, with some critics dubbing it a ‘he-shuffle’. But the PM later gave two female MPs new roles.

Whip Heather Wheeler was made a junior minister in the Cabinet Office, albeit with no extra pay, and transport minister Wendy Morton gained seniority.

New Chip Whip Chris Heaton-Harris told BBC’s Newsnight: ‘I would like to think we have a very strong Prime Minister who is going to continue and get stronger and stronger and lead us into the next election, which we will win comfortably.’

Mr Spencer’s continued role in Government has raised eyebrows as he continues to be investigated over his role in MP Nusrat Ghani’s allegations of Islamophobia.

Mr Johnson the Cabinet Office to ‘establish the facts’ regarding the Tory MP’s claim that she was asked by a whip her dismissal as a minister in 2020 was because of concerns about her ‘Muslimness’. Mr Spencer identified himself as the whip but denied her accusation of her.

Health Minister Edward Argar told Times Radio: ‘There is an investigation going on into those specific allegations that were made… So it wouldn’t be right for me to comment while that process is going on.

‘Speaking on the basis of my working relationships, and as a colleague, I’ve always found Mark to be an incredibly decent, forthright and genuine person and I found him to be a highly effective chief whip.’ 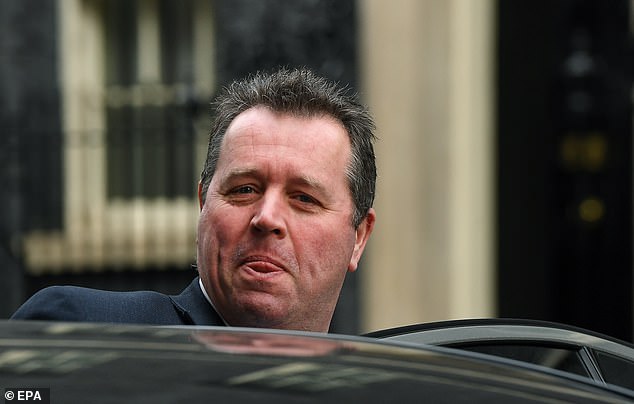 The Prime Minister axed chief whip Mark Spencer after a month of mutinies and miscalculations. But the Sherwood MP, dubbed the ‘Big Farmer’ by Mr Johnson, was shunted into a ministerial post instead of being fired 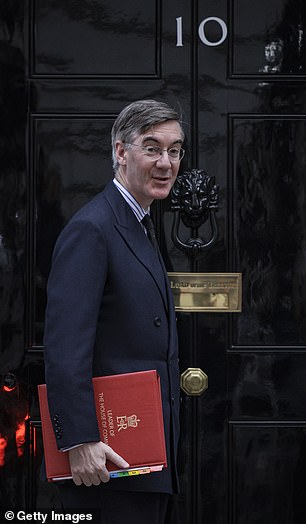 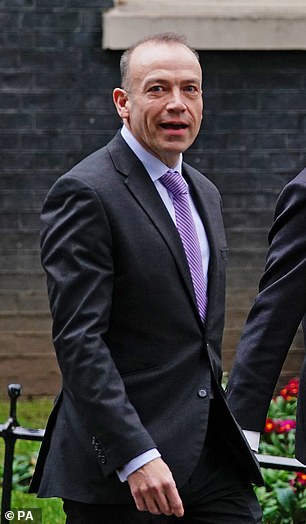 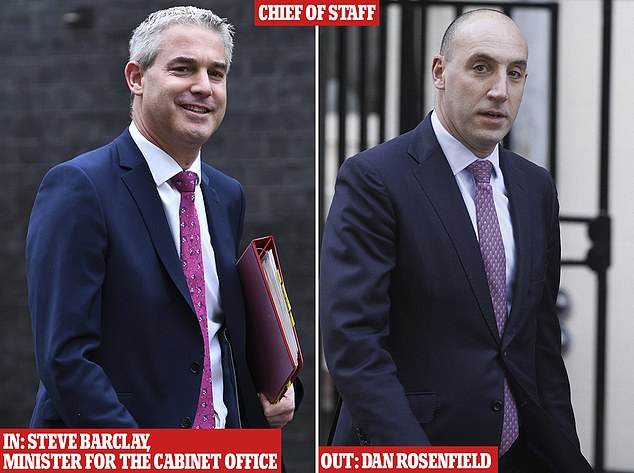 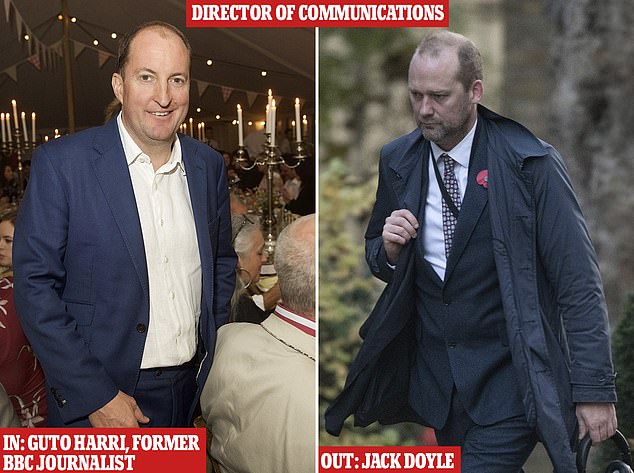 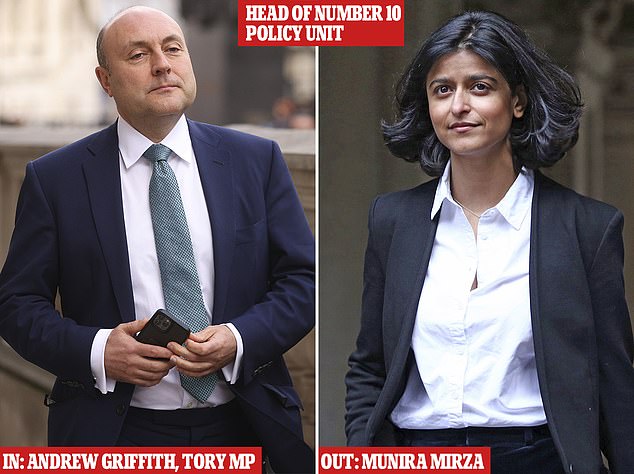 Mr Johnson also doubled his unpaid parliamentary private secretaries – MPs who try to improve relations with Tory backbenchers – from two to four. Most previous prime ministers had just one.

Senior backbencher Sir Bernard Jenkin last night warned that the ‘reset’ must not just be cosmetic. It follows a clearout of senior officials at the weekend as the PM tries to show MPs and the public he is serious about reforming No10 in the wake of Partygate.

He said: ‘We are looking for a change in the capability and character of the Government so we can have confidence that nothing as clumsy and mortifying as this Partygate episode can happen again.’