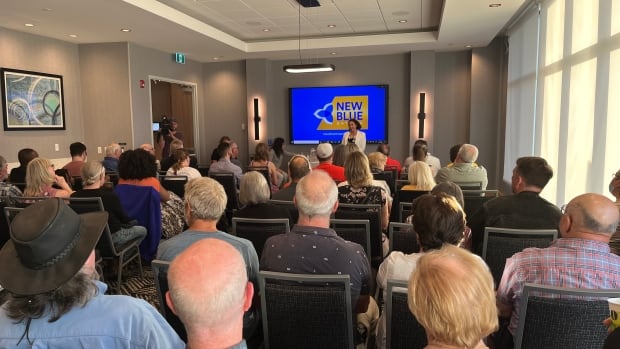 In a small and sweltering hotel room in suburban Ottawa, it was standing-room only last Wednesday night as more than a hundred supporters listened to 90 minutes of speeches from the leader and local candidates of a party running in its first election ever.

“Every time we take a step, we gain momentum. There’s no shortcuts for us. So this is all a grassroots effort. But every meeting we’re having, we’re pleasantly surprised.”

Along with the Ontario Party, founded in 2018, the New Blue party is positioning itself as a more conservative alternative to Doug Ford’s Progressive Conservatives.

The New Blue and Ontario Party have similarities. Their platforms both have anti-pandemic mandate stances, and each boasts an incumbent MPP who was thrown out of the PC caucus in the last term.

They’re both among 21 minor parties — and 41 independent candidates — that are seeking voters dissatisfied with the four mainstream options in the June 2 provincial election.

Of the 900 candidates registered with Elections Ontario by the May 12 deadline, more than 400 are affiliated with minor parties.

However, because these minor parties are often lumped together under “other” in opinion polls, it’s hard to know how much support any individual party might have.

Currently, polling shows about five or six per cent of people are responding “other” when asked if they’d vote for the PCs, Liberals, New Democrats or Greens. But according to Éric Grenier — the polling analyst with TheWrit.ca who runs CBC’s poll tracker — that figure can be misleading.

“When pollsters have a category that they deem as ‘others,’ it can get a lot of non-voters or people who … are not sure of which parties they’re going to vote for,” he said.

“So it is usually a number that is a little bit inflated.”

In the 2018 provincial election, for example, only one per cent of votes cast were for non-mainstream parties.

Still, it does appear that the New Blues and the Ontario Party are taking up most of the oxygen in the “other” category during this campaign.

New Blue is fielding a full slate of 124 candidates, while the Ontario Party has 105 (most other minor parties are running slates of fewer than 20 candidates).

Both have active leaders, hold events and you’ll probably see a few of their signs.

The parties both oppose vaccine passports. They both call for parents to have more publicly-funded choices on how to educate their children. They oppose gender identity and race issue discussions in school—such as the measures called for in a private member’s bill from the NDP on racial equity on education — or what the New Blue platform calls “woke” activism in the classroom.

Given the similarities and the fact that they are fighting over the same tiny slice of the voter pie, one might expect the parties to merge.

But not for this election.

The Ontario Party made some sort of overture to the New Blues earlier this year, which was rebuffed. Karahalios, for his part, has accused Ontario Party leader Derek Sloan of supporting former federal Conservative leader Erin O’Toole in the leadership debate, which Sloan has denied.

While there are apparent personality clashes between the two parties, there are a few platform differences, too.

WATCH | New Blue aims to give conservative voters ‘another choice’:

The New Blue party was officially recognized by Elections Ontario in January 2021 and founded by wife-and-husband team Belinda and Jim Karahalios.

Belinda is the incumbent MPP for the riding of Cambridge. she was removed from the PC caucus in July 2020 for voting against Bill 195, which allowed the government to amend some COVID-19 related emergency orders a month at a time for up to two years without consulting the legislature.

Jim, currently a candidate in Kitchener-Conestoga, has exposed problems with the PC candidate nomination elections in the past. He also ran in the federal Conservative leadership race in 2020, but was tossed out – twice.

“Cracking down on voter fraud in internal party elections” is part of the New Blue platform, and it would abolish the per-vote subsidy that established parties receive from taxpayers — which PC Leader Ford said in 2018 he’d cbefore, but never did.

The New Blue platform calls for, among other things, taking down operating wind turbines — they say this will reduce hydro prices — removing the carbon tax (imposed on Ontario by the federal government) and reducing the HST to 10 per cent from 13 per cent .

It would also cancel the Toronto Star’s online gaming license and tax any media outlets receiving federal subsidies as part of its self-described plan to promote a “free press.”

Derek Sloan, leader of the Ontario Party, says voters are looking for a more positive message from political leaders ahead of this election, something he’s hoping his party can provide.

The Ontario Party has been around since 2018 when it ran five candidates and garnered 2,316 votes.

Last December, former Conservative MP Derek Sloan became the leader. He was ousted from the federal caucus in January 2021 for having accepted a donation from a white supremacist.

In a news release, the Ontario Party says they believe the suspension is a result of this tweet, in which Sloan claimed public health officials will “rebrand” what he called “the symptoms of vaccine injury” as long COVID. #onpoli pic.twitter.com/IMzQuESM7W

Sloan is currently running for the Ontario Party in Hastings-Lennox and Addington, the same riding he held as an MP for two years.

Rick Nicholls, the incumbent MPP for Chatham-Kent-Leamington, also joined the Ontario Party last December and is running the southern Ontario riding again this election. Nicholls was removed from the PC caucus last August for refusing to get vaccinated against COVID-19.

Also running for the party in Peterborough-Kawartha is Tom Marazzo, who acted as a spokesperson for the trucking protesters that occupied downtown Ottawa for three weeks in February.

Indeed, Sloan says the Ontario Party has attracted a number of folks who supported the convoy.

“I think most people are favorable to the plight of the truckers … and feel that it was handled inappropriately,” Sloan told CBC News, referring to the use of the Emergencies Act and the police actions that cleared Ottawa’s downtown streets.

The protests also got the attention of former Donald Trump adviser Roger Stone, who’s been hired as a “high-level” campaign strategist by the Ontario Party. (Sloan says Stone is giving the party “a sweetheart deal.”) Stone was sentenced to 40 months in prison in 2020 after being found guilty of lying to Congress and obstructing justice, but Trump pardoned his sentence later that year.

The party’s mandate talks about “the supremacy of God and the Rule of Law.” Among its unique promises are canceling the current government’s plans for digital identities, and lowering tuition for post-secondary education for programs related to in-demand jobs while removing funding for “programs for which labor market demand is low.”

As part of its housing platform, the Ontario Party wants to set the province’s immigration policy, “with the ultimate outcome of reducing unsupportable housing demand in many of Ontario’s urban areas.” And it would repeal the “bubble zone” legislation the former Liberal government put in place around abortion clinics.

It may seem easy to label some of these groups as “fringe,” but their supporters don’t see it that way.

“There is no fringe. These are regular people who hold regular jobs,” one New Blue supporter told CBC News.

In face, many minor parties have been around a long time and create a space for those who feel alienated from mainstream politics, say political experts.

“Creating a political party under the financial regime created by Elections Ontario is not for the faint of heart,” said Tamara Small, a professor of political science at the University of Guelph.

“I think that they do it believing that this is a place in which they can, at the very minimum, feel like they’re exercising their democratic rights and also be able to find like-minded people.”

She said that while many minor parties have “narrow slices” of platforms, that tend to promote a particular idea — think the Electoral Reform Party, or the Party for People with Special Needs, each of which are fielding two candidates — and some are in it for the long haul.

The Green Party of Ontario was a minor party for decades, but now has a MPP sitting at Queen’s Park — the first time the Ontario legislature saw an MPP from a fourth party since the 1940s, said Small.

Whether the New Blues or the Ontario Party have that sort of staying power is yet to be seen. But they are very unlikely to have much impact in the June 2 election.

It’s not only that the number of supporters are a tiny fraction of the eligible voter pool, but they are usually spread out, making it near impossible for a minor party to win a seat in Ontario’s first-past-the-post electoral system.

“It’s rare that you would have a lot of supporters for that brand new party in one riding that could then make sure that it wins first on the ballot and win the seat,” said Anna Esselment, an associate dean with the University of Waterloo’s political science department. “But they can have effects in other ways. There can be vote splitting effects.”

She said in an extremely tight race, the New Blue and the Ontario Party could possibly attract enough conservative votes to cause the PCs to lose a riding, although she doesn’t see that as a possibility at this point in the race.

In addition to the four main parties, the four minor parties already mentioned, and the independent candidates, 17 other parties are fielding candidates.