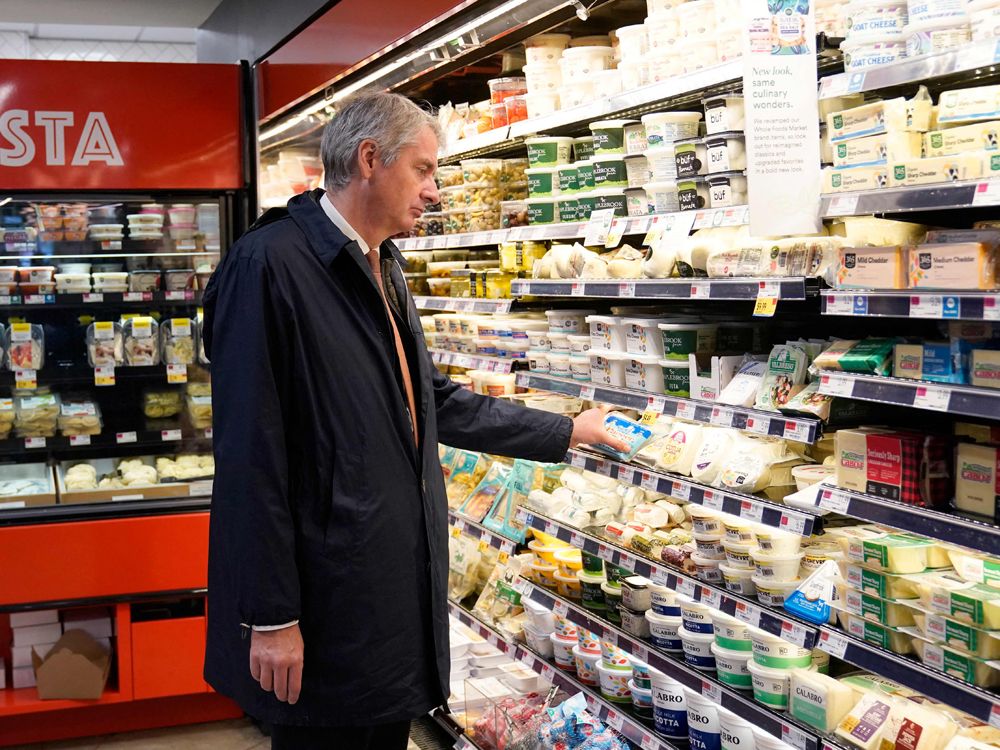 Reclusive French billionaire Emmanuel Besnier, chief executive of Groupe Lactalis, the dairy giant behind Black Diamond cheese and Lactancia milk, said his company is coping with the broadest inflationary pressures in its history.

“We are experiencing now, for just under a year, an inflation of the cost of primary materials, packaging, energy, that we have never seen in the past,” Besnier said during a rare interview while visiting Montreal this week.

Besnier, who controls Lactalis with his two siblings, is worth about US$9 billion, good for 232nd spot on Bloomberg’s Billionaire Index. Besnier, who has been referred to in his native country as the “invisible boss” and the “invisible man” because he keeps such a low profile, opted to do some press to highlight the importance of Canada in the Lactalis empire, which spans roughly 100 countries. Canada is the company’s second biggest market after France. “We would like to continue developing dairy products in Canada with the Canadian dairy producers,” said Besnier, the third-generation of his family from him to lead the company his grandfather Andre Besnier founded in Laval, France in 1933.

Emmanuel Besnier took over in 2000, following the death of his father, Michel. The closely held company reported revenues of €22 billion (roughly $30 billion in Canadian dollars) and net income of €445 million ($600 million) on May 5. The press release said Lactalis anticipates input costs to be 12 to 15 per cent higher this year, suggesting that replicating those results won’t be easy.

Lactalis is among the food processors chafing under the unwillingness of Canada’s grocery oligopoly to pay its suppliers higher prices. In December, Mark Taylor, CEO of the company’s Canadian unit, published an op-ed in the Financial Post that argued the lack of competition allows the biggest grocers to implement “opaque listing fees, arbitrary demands for price reductions, and payments for retail infrastructure.” This weakens Canada’s food supply chain, he said in an interview, and adds unnecessary “cost and complexity.”

Taylor is part of a working group that is attempting to come up with a code of conduct for the food industry. The group missed a deadline to finalize an agreement by March. “That timeframe seems to have drifted,” Taylor said. “Hopefully it won’t drift too far.”

When asked how the lack of a code affected how Lactalis does business, Taylor said, “Oh, crikey. I mean, it touches so many aspects of what we do.”

A Canadian grocery code would provide certainty for manufacturers, he said, so they could make better long-term investments. It would also “encourage true end-to-end collaboration within the supply chain,” and create a more efficient dispute resolution mechanism, as one does not currently exist, said Taylor.

The Dairy Processors Association of Canada has also advocated for the code, as has the Dairy Farmers of Canada. “In recent years, some retailers have increased pressure on suppliers by imposing arbitrary and unreasonably harsh fees and penalties and making unilateral changes to supply agreements,” the Dairy Farmers of Canada said in a statement. “If left unchecked, these practices could hamper product innovation, reduce product variety, and generate unnecessary costs, with a negative impact on dairy farmers, processors, independent grocers and consumers alike.”

I want to see the whole industry, end-to-end, arrive at a better place

Codes of conduct have been implemented in countries such as Ireland, Australia, and the UK, where Taylor spent most of his dairy career. There, he said, the implementation of a code of conduct was better for everyone. I have witnessed prices decreasing, rather than increasing as stakeholders initially feared.

“I want to see the whole industry, end-to-end, arrive at a better place,” Taylor said. “I started my career as a dairy farmer, so I know what it’s like to milk cows, and do that job – it’s a really challenging job.”

Not everyone agrees with Taylor’s point of view. The Retail Council of Canada, which represents Canadian retailers, was initially opposed to the code, saying that government officials were “putting their thumb on the scale in favor of behemoths in the food processing industry.” The council also said that a code could lead to higher profits for multinational food brands and higher prices for consumers.

“Pricing isn’t part of the code framework. You’re still in a situation where you negotiate pricing,” said Taylor. “A code is not designed to dampen anybody’s ability to negotiate in a very robust way. What it does do is encourage best practice in fair dealing.”

The retail council later changed its stance, allying with organizations such as the Canadian Federation of Independent Grocers (CFIG) and the Canadian Produce Marketing Association, proposing a plan to implement a code. However, the CEO of Walmart Inc.’s Canadian unit, Horacio Barbeito, said he wouldn’t support a code. “I’m not for it,” he said. “There’s healthy competition in the market.”

‘Never seen such a level’

The absence of a code of conduct isn’t the only thing complicating business for Lactalis this year.

“We have never seen such a level [of inflation],” said Besnier. “Often we have primary materials, or packaging, or energy [inflating prices, but] this year, all of the elements of our products are in high inflation.”

Further complicating the situation, last October, the Canadian Dairy Commission (CDC) announced an 8.4 per cent increase in the cost of milk, effective February 1, 2022.

“Obviously there have been continuing impacts of inflation on our business since the CDC-linked increase in February. So we’re monitoring that very closely,” said Taylor. “It’s, of course, concerning. And we feel there is more to come… I think it’s a very dynamic situation, one that we follow closely.”

Nevertheless, Besnier said he is happy with how the company is doing. “The satisfaction is, despite these problems that have been going on for more than six months, the group has succeeded in maintaining the food chain and has succeeded in continuing to deliver all of our products,” he said.

When asked what measures the company was taking to counteract inflation, Taylor said, “Everything we can internally. You know, we constantly look for opportunities to mitigate,” he said. “Unfortunately, it’s not always possible to cover all of those impacts. And at that point we have to go to our customers.”

Lactalis informed Canadian retailers in November that it would be raising prices by as much as 15 per cent.

To reduce its dependence on fractured international supply chains, Besnier said Lactalis abides by a “local, everywhere” approach. Though the company is present around the world, its aims to work with local producers and national packaging companies so that it is “close to the producers, and also to our consumers, and to their needs,” said Besnier.

“I think a lot of governments and businesses are re-evaluating how their supply chains are structured,” said Taylor. “Historically, we’ve talked about globalization, but I guess some people may be looking at that, and thinking that perhaps localization is going to be important in certain sectors in order to build more resilience in supply chains.”

Indeed, the pandemic has had the trend toward “localization,” as complex global supply chains continue to be under strain.

“We know now, more than ever following two years of a pandemic, that we need robust, resilient, and sustainable food and grocery supply chains across Canada,” said Taylor. “If you have any weak links in that chain, you’re in danger of shelves going empty.”

Sign up to receive the daily top stories from the Financial Post, a division of Postmedia Network Inc.

The next issue of Financial Post Top Stories will soon be in your inbox.