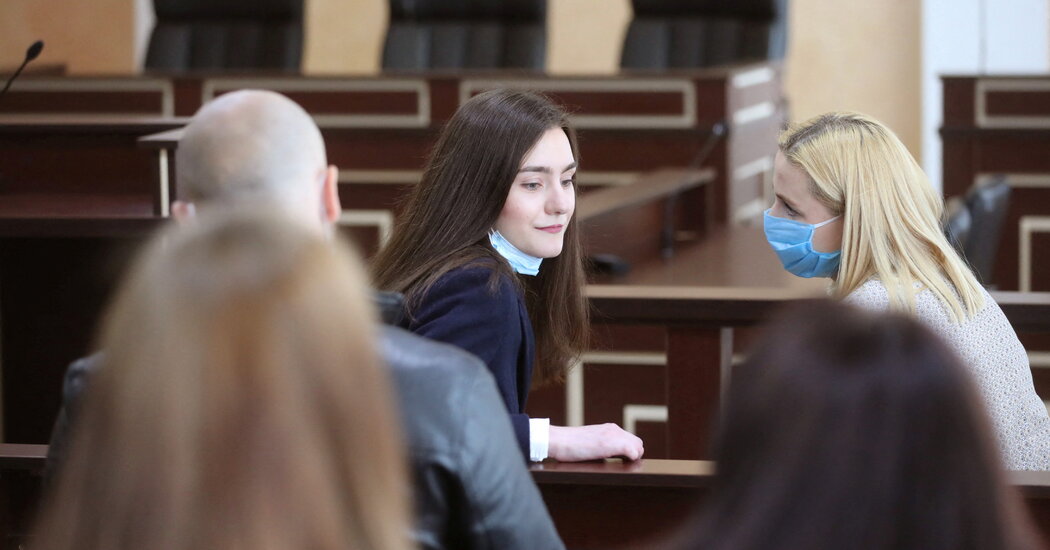 A court in Belarus on Friday sentenced a Russian law student whose boyfriend is a prominent dissident to six years in a penal colony, nearly a year after the country’s authorities diverted a commercial flight to Minsk in order to arrest them.

In a statement, the Belarusian court said it had found the student, Sofia Sapega, guilty of inciting social hatred and illegally disseminating private information. She had been under house arrest and was taken into custody in the courtroom to begin a prison sentence.

Last May, Ms. Sapega, 24, was traveling from Greece to Lithuania with her romantic partner, Roman Protasevich, a prominent opposition figure in Belarus, when the Belarusian air traffic control used a false bomb threat to divert their plane to Minsk, where they were both arrested.

The arrests sparked international outrage and Western countries imposed sanctions on Belarus. Their detentions came after months of street protests that failed to depose Aleksandr G. Lukashenko, the president of Belarus, who is often described as “Europe’s last dictator.”

Mr. Protasevich, 27, was the editor of the NEXTA channel on the Telegram messaging app, which had emerged as a driving force for mass protests against Mr. Lukashenko.

Since his arrest, Mr. Protasevich, an outspoken opponent of the government for years, has made appearances at televised news conferences to voice admiration for Mr. Lukashenko. He has said he was not coerced to reverse his stance about him, but opposition leaders say his statements about him were made under duress. He has yet to be tried or sentenced, and his legal status is unclear.

Hundreds of thousands of Belarusians protested against Mr. Lukashenko’s rule after he was re-elected in a contested election in August 2020. To stay in power, the embattled president resorted to savage violence, with his security agents arresting and beating thousands of people.

Mr. Lukashenko also turned to his ally, President Vladimir V. Putin of Russia, who declared his support for the Belarusian leader and said he was ready to send security reinforcements. Those moves were regarded by many analysts as a game changer that made sure local government officials in Belarus stayed in line.

Mr. Putin’s support came with a price, however, forcing Mr. Lukashenko to abandon his usual game of playing Russia and the West against each other. Some experts have argued that Mr. Lukashenko’s survival of him as president in 2020 paved the way for Mr. Putin to use Belarus to launch attacks against Ukraine earlier this year.