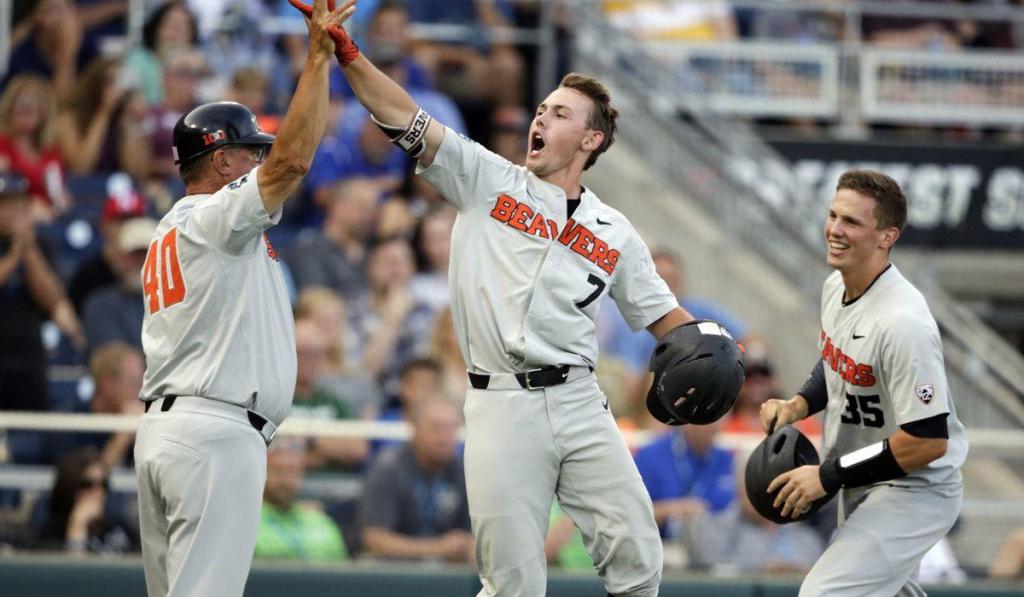 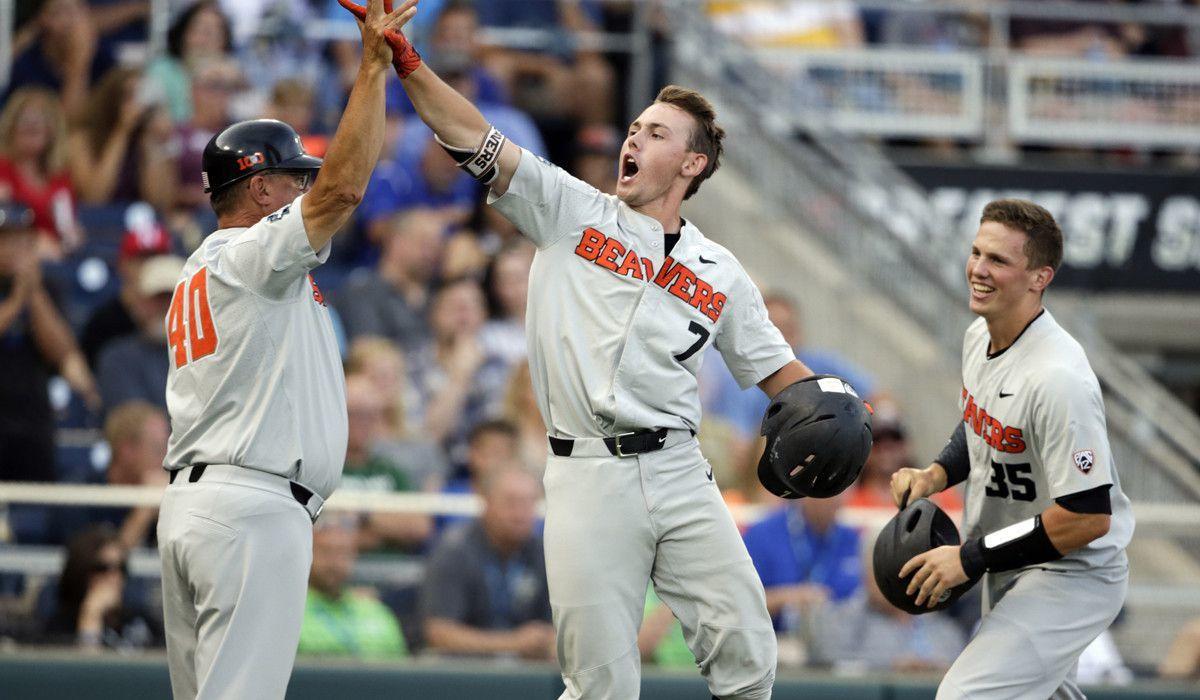 At the bottom of the pile, Christian McCaffrey felt he had to ask to confirm his suspicions. Then one of the best returners in college football for Stanford, McCaffrey wasn’t used to being dragged down — let alone by whom he now feared.

“Did I just get tackled by the kicker?” McCaffrey asked at the bottom of the scrum.

“Yep,” Adley Rutschman responded. “You just got tackled by me.”

Of course, labeling Rutschman as a kicker is only part of the truth. He could boot the ball deep and hit a state-record field goal in high school, but Rutschman wasn’t the spindly stereotype of what a kicker tends to be. I’ve played fullback and outside linebacker in high school, too.

And he happened to be a burgeoning baseball player for Oregon State, a freshman on his way to becoming the top overall selection in the 2019 Major League Baseball draft and the highest-ranked prospect in the league with the Orioles.

But before he took the diamond at Oregon State, starting that rapid rise as a highly coveted catcher and the future of Baltimore’s organization, he was kicking off for the Beavers. And tackling a future NFL star.

“From the outside looking in, it was like, ‘Oh man, a kicker,’” said Jake Cookus, the special teams coordinator at Oregon State. “But Adley wasn’t a kicker. He was a dude.”

For that one season for the Beavers, Rutschman lived his dream of being a two-sport athlete. But it was a dream that couldn’t last — not if he was to become the caliber of baseball player he is now.

Still, when Rutschman looks back on his college years, spending his freshman season as a kicker for Oregon State is one of his fondest memories. There was the time he tackled McCaffrey, of course. Yet that takes a backseat to the exhilaration of recovering his own onside kick against Boise State and storming the field at the final whistle when the Beavers ended an eight-game losing streak to Oregon in 2016.

He had planned to play all four years, until the realization settled in midway through the baseball season that maintaining that lifestyle wasn’t only strenuous — it was taking away from his development on the diamond. But to get one year on the football field in college, after Rutschman had thought his career ended in high school? That was worth the two-a-day practices and constant juggling that came with being a two-sport athlete.

“I have no regrets either way,” Rutschman said. “Looking back, it’s a fond memory for me. The fact that it worked out the way it did with baseball after that is unbelievable.”

When Cookus looked around his special teams room, he knew where to find the missing piece of the puzzle. He had a returning kicker for field goals, but Oregon State didn’t have a kickoff specialist with the leg strength he wanted in the Pac-12. Rutschman did.

Cookus had seen Rutschman kick at Sherwood High School in Oregon. He knew the kind of leg Rutschman had. The only hurdles would be convincing both Rutschman and the baseball coach, Pat Casey, to let the catcher try out for the football team.

“Are you interested in still kicking?” Randy Rutschman, Adley’s father, recalled Casey asking. “And he said, ‘Yeah, why not?’

That had been Rutschman’s approach to kicking all his life.

It wasn’t so much that Rutschman loved kicking. He just wanted to do everything, and that included the most important special teams role. But that role grew when Rutschman fractured his hand as a fifth grader, leaving him with nothing to do but use his feet from him. Over those two weeks of recovery, he improved rapidly.

As a freshman in high school, Rutschman was already hitting close to 40-yard field goals, and he received a call-up to varsity for Sherwood’s playoff run to handle kicking duties. By the time he was a senior, Bowmen coach Greg Lawrence had the confidence that Rutschman could hit from just about anywhere on the field.

With just under three seconds on the clock before halftime of a playoff game between Sherwood and Tigard, Lawrence called a timeout.

“The ball was on the 47-yard line, and I was thinking, what’s the coach trying to do? Is he gonna come up with a hook-and-lateral or some kind of special play?” said Ad Rutschman, Adley’s grandfather and the longtime football and baseball coach at Linfield College. “But when they lined up to kick the field goal, by golly, that was amazing. I probably haven’t witnessed anything more exciting in football than that one single play.”

The snap skipped off the ground into holder Adam Vasquez’s grasp, but it didn’t disrupt Rutschman’s timing. He connected and watched it fly 63 yards through the uprights — an Oregon state record, and the beginning of what could’ve been a blossoming kicking career at Oregon State.

At fall camp, Cookus noticed immediately the distance Rutschman could drive the ball, even after the time off. He won the kickoff specialist position by Week 3 and dove into a scrum to secure an onside kick three quarters into his first game.

“To me, a lot of kickers aren’t going to bury their nose into contact,” Ad Rutschman said. “That didn’t face him.”

Rutschman relished those opportunities to make contact, something he missed from his time as a tailback and outside linebacker in high school. He recorded three tackles that year — one of which came against McCaffrey — and averaged 59.5 yards on his kickoffs while forcing 20 touchbacks.

He left such an impression that Cookus still raves about Rutschman to this day.

“It’s my best sales pitch to some recruits. ‘I’m like, I got a guy to be a first-round draft pick in the major leagues, man. As a baseball player,’” Cookus said. “Adley’s a once-in-a-lifetime type player. He could’ve been an NFL kicker if he wanted to. I think he had the mindset. Just, he was wired that way. He’s different. He’s a one-percenter. There’s not a lot of dudes out there that are wired like that.”

‘You made the right decision’

Rutschman dreaded making that phone call, but as the baseball season droned on, he knew what he had to do. The time it took to play football and baseball — regardless of how much he enjoyed it — was unsustainable.

He’d wake up and go lift. After eating breakfast, he’d head to football practice. Then he’d have lunch, baseball practice, and another meal. By the time those two practices were finished, I finally found time to study. Even as Cookus offered to let him out of football practice early, Rutschman wasn’t one for shortcuts. He had to be all-in.

And when he discovered early in his quest that spring to become Oregon State’s starting catcher, the dream of being a two-sport athlete faded.

“He read the writing on the wall and said, ‘You know what? If I’m really going to be a baseball player, I need to spend my focus and my time on that,” Randy Rutschman said.

Cookus hoped Rutschman would remain on football. He saw him as a key cog in the Beavers’ special teams unit, both as a kickoff specialist and field goal kicker. But as Rutschman began to break through as a freshman catcher, his hopes for him began to waver. Then the phone range, confirming those suspicions.

Rutschman was heading to the Cape Cod League that summer to play for the Falmouth Commodores, aiming to improve his work at the plate. And while Cookus left the door open for football, Rutschman soon closed it.

Ad Rutschman would’ve loved to see his grandson continue playing football. Adley’s mother, Carol, felt the same way. Cookus saw the potential for Rutschman on the football field, which made that conversation difficult.

But a week later, as Rutschman prepared to head deeper into the NCAA Tournament with Oregon State baseball, he received a text from the football coach staff.

“Best of luck in the College World Series,” the text read. “The more we think about it, the more we understand. You made the right decision.”

A two-sport dream could only last so long.