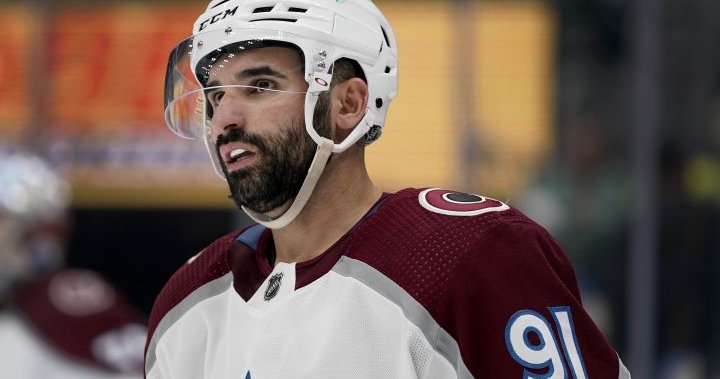 Kadri skated with a stick in his hand for the first time since injuring his right thumb crashing into the boards during the last round. He did not take any shots in 45 minutes on the ice.

READ MORE: Kadri among among potential UFAs with NHL free agency 4 weeks away

Cogliano took a puck to the right hand in Colorado’s series clincher against Edmonton in the Western Conference final. Noticeably, he shook hands with Oilers players and coaches with his left hand.

Despite that, Cogliano appears closer to being ready to face the Tampa Bay Lightning than Kadri, who was injured on a hit by Evander Kane that prompted a one-game suspension.

The Avalanche lead the series 1-0 with Game 2 set for Saturday night.

A day after saying he and Colorado Avalanche goalie partner Pavel Francouz usually get a text message the night before a game telling them who’s starting, Darcy Kuemper finally let on that it wasn’t such a secret going into the Stanley Cup Final.

“I might have known a little bit longer,” he said.

“I was pretty happy with his performance,” Bednar said.

“Darcy is a guy we leaned on heavily all year long. It’s why we relied on him to do this job.”

READ MORE: Lightning unfazed by being down 1-0 to Avalanche in Stanley Cup series

The Avalanche played it like it was some sort of debate between Kuemper, their starter all season who has missed time this playoffs with injury, and Francouz, who was 6-0 filling in. They know they have options as one of just five teams in NHL history to have two different goaltenders win at least five games each during a playoff run.

But most teams would love to lean on one guy, and Kuemper taking an inadvertent stick to the right eye through a hole in his mask in the first round is the only thing keeping him from playing every game.

Kuemper insists now he’s fully healthy. That was clear in a couple of important stops he made on three successful Colorado penalty kills in Game 1, which was another step for him putting the eye injury in the past.

“It was an unfortunate incident in the first round,” he said. “I’m glad I came out of it and everything is back to normal now, so nothing you can do about it.

“It’s not easy watching some of those games, but the team has been so great that I’ve just been worried about getting myself back sharp and getting healthy.”

Lightning star Brayden Point got off to a bit of a slow start in Game 1, but that’s understandable given he hadn’t played in a month because of a right leg injury. Despite the long layoff, Point skated almost 18 minutes, assisted on Nick Paul’s goal and drew a penalty.

After starting the series on Tampa Bay’s third line, Point is now a candidate to move up closer to his usual first-line role.

“It’s not per se where I’m going to put Brayden Point,” coach Jon Cooper said Thursday. “It’s what’s best for our team, and usually when he’s up in the lineup, that’s good for us.”

Cooper liked what he saw in Point in the opener, although it’s clear the Lightning’s leading goal-scorer the past two playoffs isn’t back to that form yet.

“He’s getting his game and his hands in order. I can expect him to get more ice time if he’s feeling better.”

Neither team held practice Thursday with an extra day between Games 1 and 2. Some Avalanche players worked out at the rink, but the priority is rest with just about everyone anticipating a lengthy series.

“In a seven-game series, you can’t get caught admiring a win, or whatever you want to call it,” Colorado defenseman Bowen Byram said.

“We’ll get prepared in the next couple days and get ready to go again.”

The extra off day can only help the Lightning. Beyond Point, the Lightning’s injury front involves forward Brandon Hagel, who has skipped some practices but continued to play through an undisclosed ailment.