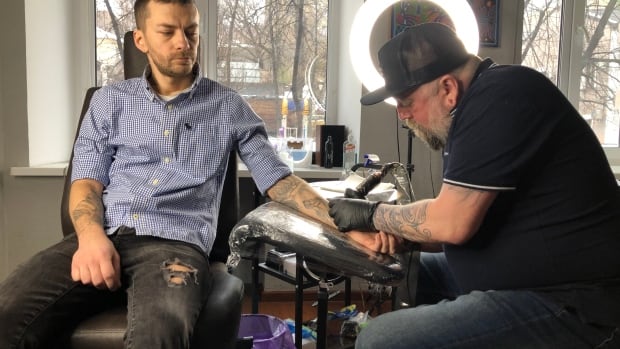 Ukraine may be at the epicenter of international anxiety over a possible Russian attack, but in the capital, Kyiv, the signs of panic are few.

“Like right now, maybe we [are] a little bit more scared, but the whole of Ukraine lives a normal life,” said Inna Prokopchuck, who with her husband, Vasyl Voronovksy, recently opened a tattoo shop a few blocks from Independence Square.

Notably, the business sports the logo of a Canadian Maple Leaf and a grinning, toothy beaver with the words “Great Canadian Ink.”

Prokopchuck said the couple recently returned to Ukraine after living in Edmonton for four years to open a shop in Kyiv. Since Canada’s brand is strong here, they made it part of their new business.

WATCH | How people in Kyiv are feeling as tensions with Russia persist:

Ukrainians avoid panic amid prospect of war with Russia

Ukrainians in Kyiv, the country’s capital, are determined not to let the prospect of war with Russia cause panic or further damage to their economy. 2:12

‘We live today, now and here’

Canadian, American and British embassies have already evacuated non-essential personnel from the capital as a precaution.

Nonetheless, at the tattoo shop, business has been strong, Prokopchuck said.

“Like you have everyday [life] — your family, your work, but you must get some emotion. Some people go to concerts; some people get tattoos,” she told CBC News on a visit to the shop.

“We live today, now and here,” he said. “We must live the way other countries live … however, being aware and expecting a Russian attack.”

That stoicism is rooted in the belief of many — if not most — Ukrainians that the country has already been at war with Russia for the better part of eight years. The conflict began with a popular uprising that ousted Russia-backed president Viktor Yanukovych in early 2014, which set off separatist unrest in Eastern Ukraine and prompted Putin to eventually seize Ukraine’s Crimean peninsula in the south.

The ensuing war between government forces and Russia-backed separatists in the breakaway eastern regions of Donetsk and Luhansk has left about 14,000 combatants and civilians dead, according to Ukrainian government estimates.

The CBC’s Briar Stewart gets rare access to Donetsk, a city in Eastern Ukraine that was seized by Russian-backed separatists eight years ago. 2:01

While Russia claims its government does not play a part in the conflict, Ukraine, its Western allies and some analysts allege there is evidence it has been supplying arms, funds and troops to the separatist-controlled region for years.

Therefore, for many Ukrainians, the current confrontation — while more intense — is a crisis they have grown accustomed to living with.

Russia has been pressing Western nations, NATO and Ukraine to provide what it calls security guarantees before it will stand down its military forces. It has demanded a guarantee that Ukraine never be admitted to the military alliance and asked NATO to commit to not deploying troops in any countries that weren’t members before its eastern expansion in 1997.

Those demands have been soundly rejected by Western leaders, although the diplomatic engagement is continuing.

France’s Emmanuel Macron was the latest foreign leader shuttling back and forth between Moscow and Kyiv, meeting with Putin Monday and then Ukraine’s Volodymyr Zelensky Tuesday.

Macron urged Zelensky to recommit to the so-called Minsk Accords, a deal signed in 2015 that lays out a process for ending the separatist war Eastern Ukraine.

The accords are toxic to Ukrainian leaders, however, as most feel the settlement will allow Russia to establish what amounts to puppet states inside Ukraine’s territorial boundaries.

Instead, on Tuesday, Zelensky urged Putin to stop mobilizing troops along Ukraine’s border and begin pulling them back.

“I don’t quite trust [Putin’s] words,” he told a Kyiv news conference.

WATCH | Here’s what happened when Macron met with Putin in Moscow:

Russian President Vladimir Putin and French President Emmanuel Macron’s meeting about tensions with Ukraine led to an agreement on ‘further joint steps,’ but no promises toward a resolution. 2:08

Tension is having economic effects

At the tattoo shop, CBC met former Ukrainian soldier Iurii Horbachov, who had come in for an appointment.

The 37-year-old is a veteran of the conflict in Eastern Ukraine and said he refuses to change his routine because of the possibility of a Russian attack on his country.

“I realize that maybe Russia wants [us] to have a crisis here in our Ukraine,” he said.

“But no, we are not afraid, and we don’t buy this. People live their lives, just being on alert.”

Nonetheless, there are fears that Ukraine’s economy, whose GDP fell four per cent last year, could suffer even more severe damage from the continuing uncertainty.

The European Union recently offered 1.2 billion euros ($1.7 billion Cdn) in emergency loans to Ukraine to help stabilize its financial system and allow the country to meet its debt repayments.

Ukraine’s currency, the hryvniawhile stable for the moment, has dropped five per cent since the Russian buildup began.

Ukraine’s business community is feeling the impact, says Vasyl Mroshnchenko, a Kyiv-based communications consultant who has been advising international companies affected by the crisis.

“The prospect of Russian escalation is a constant threat which hurts Ukrainian morale, and it discourages investment,” he said.

Zelensky, Ukraine’s president, has notably downplayed the threat of a Russian invasion, in part to try to calm the fears of the business community, but Mroshnchenko says the strategy has only been partially successful.

“Many companies [that] have considered expansion have put it on hold. As well, nobody new is going to come in these circumstances.”

He said he knows of some international firms that are considering moving out of the capital to the western Ukrainian city of Lviv, which is close to the Polish border and considered to be much safer should Putin decide to make a move.

A survey by the European Business Association suggested that 45 per cent of foreign firms indicated they intend to stay in Ukraine no matter what happens, 17 per cent might move elsewhere in Ukraine if the capital is attacked and 10 per cent of firms are considering moving altogether .

Key IT sector at risk

Ukraine’s crucial IT sector is considered to be especially vulnerable in the event of further hostilities with Russia.

Mroshnchenko says IT workers are highly mobile, and he fears an exodus in the event of an escalation.

“[Companies] are definitely going to just move them out to other parts of Ukraine or move them to Poland, where they can replicate them and continue working with Western clients from the UK, US, Canada,” he said.

That’s why so many people are resistant to changing their behavior in spite of the looming threat, he said.

“Everything is the way it was before: people buy cars, organize barbecues, visit each other.”