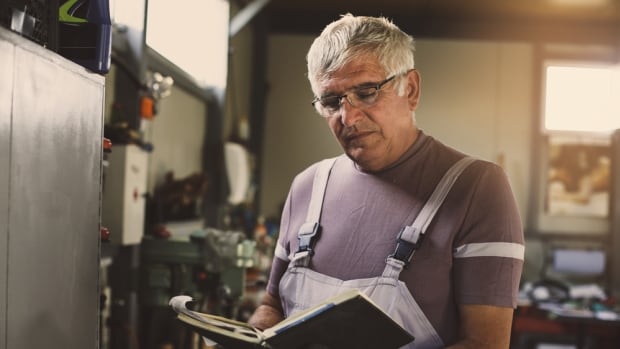 He’s working as a catering server at the Muttart Conservatory in Edmonton’s river valley.

King wished he had worn his Skechers instead of dress shoes to his first shift, but otherwise he loved it.

“The people I worked with were good, and it was fast paced, which I’m used to. I missed that fast pace in my life,” he said in an interview.

King has worked since he was 16 years old.

His first paid work was handing out programs during the Klondike Days parade. Next, he was an assistant to local magician Dale Harney, his cousin.

He spent more than 40 years as a nurse in Edmonton before retiring in 2020, mainly due to his health. But he got the itch to re-enter the workforce.

“I needed to do something. I guess, needed the feeling of a purpose,” King said.

The silver tsunami is a term coined to describe the aging population of baby boomers, born between 1946 and 1965. The oldest boomers are now in their late 70s, while the youngest boomers are in their mid- to late-50s.

An aging population raises various concerns, such as higher health-care costs. Among them, too, is the large void the tsunami could create in Alberta’s labor force if the youngest boomers stop working by 65, the traditional retirement age.

Experts say government and employers have time to act to retain the youngest boomers in the workforce, and prepare for when they eventually leave.

Researchers are hopeful for Alberta, because the province has a younger population than most of Canada and there are seniors, like King, who are working.

“The ’50s notion that you work your whole life, and at 65 you get the gold watch and you sit on your butt in the sun — that’s not happening now,” said Susan McDaniel, a University of Victoria adjunct professor of sociology whose expertise is Canada’s aging population.

“A lot of people — out of need, or they wish to contribute, or the fact that they’re healthier for a longer period of time — are still working.”

The number of Albertans aged 55 and older has grown disproportionately compared to other age brackets over the last quarter century, census data shows.

Nearly 4.3 million people now live in Alberta, an increase of over 1.5 million since 1996. But only the 55-64 and senior brackets have grown significantly.

In 1996, Albertans aged 65 or older made up 9.8 per cent of the population. That demographic now makes up nearly 14.8 per cent, according to recently released census data.

The proportion of Albertans under 15 years old shrunk by nearly four per cent in that time.

“One of the big concerns that came out of the 2021 census data is that, ‘Oh my goodness. We’ll have more and more people not working,” said Donna Wilson, a nursing professor at the University of Alberta.

“We’ve just become quite comfortable thinking that age 65 is when you retire.”

There is a lot of social pressure to retire by 65, in part to free up jobs for younger people, Wilson said. But turning 65, or retiring in general, doesn’t mean a person will forever stop working.

In April, about one in four Albertans aged 65 to 69 was employed, according to labor force data from Statistics Canada.

Before the COVID-19 pandemic, closer to one in three Albertans in that age bracket had a job in some capacity, data shows.

Wilson expects some people nearing retirement age will work longer out of need, due to the financial impacts of the COVID-19 pandemic.

Tracy Lee, 59, works for the Alberta government as a legal adviser in the Edmonton Crown prosecutors’ office. She enjoys her job but has been working with her financial adviser to see when she can retire comfortably.

Her goal is to hang it up in about five years, which is when she’ll be able to get her full pension from the province. She she’ll retire earlier if she can, though.

“When you start getting to my age, you start thinking there’s less time ahead of you than behind you,” Lee said.

“Doing life at my own pace—I’m really looking forward to that.”

Lee is among the youngest of the baby boomers.

Pedro Antunes, chief economist with the Conference Board of Canada, said the youngest boomers make up a group of workers important for employers to retain.

They tend to have a lot of experience and often hold senior positions.

They also account for so many workers that, if they were all to retire within the next several years, it would leave a massive gap in the labor force, Antunes said.

Census data shows Nunavut and the Northwest Territories are the only places in Canada with younger populations than Alberta.

That’s an advantage, Antunes said, because it lends more time to develop policies that could keep people working longer.

Action is required sooner than later, though.

“You can only delay retirement for so long,” he said.

“That [baby boomer] cohort is a massive cohort that is just going to keep getting older.”

Antunes added that employers, and possibly government, need to find ways to encourage people to work longer, but don’t punish them for doing so.

The Alberta government is aware of retiring boomers’ potential impact on labour: its latest three-year fiscal plan notes that slower population growth and the province’s aging will limit the available workforce, placing “greater reliance on interprovincial and international migration to fulfill our labor market needs.”

The plan also notes the COVID-19 pandemic appears to have pushed people to retire or work part-time.