Aishwarya Rai Bachchan made her second red carpet appearance at the Cannes Film Festival on Thursday and it was almost as eye-popping as her first. Ash, veteran of the Cannes red carpet, showed up wearing a pleated, architectural gown in designer Gaurav Gupta’s signature style. The dress, in pale pink streaked with silver, featured a design element that rose up from the shoulders and formed a sort of giant halo behind Aishwarya’s head. As far as dramatic gowns go, this one is fairly high-octane. Aishwarya Rai Bachchan, attending a screening of the film Armageddon Timeaccessorized the maximalist look with minimal jewellery, soft makeup and a simple hairdo. 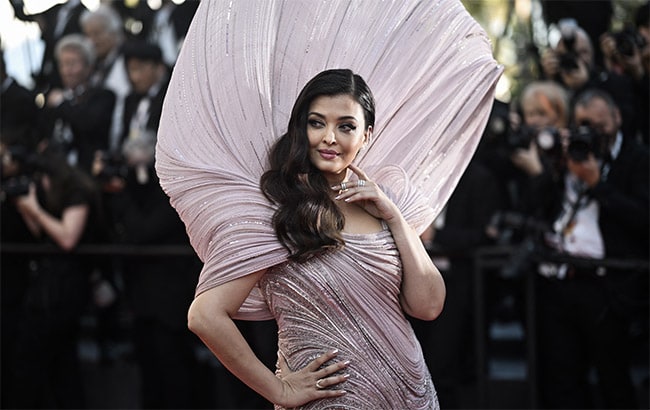 Aishwarya Rai Bachchan has been pulling rabbits out of hats, fashionably speaking – all her looks so far at Cannes this year have not only been high-impact but also well out of her comfort zone of lacy Elie Saab and mermaid silhouettes. Also can we say that it’s refreshing to see an Indian designer that isn’t Sabyasachi on the Cannes red carpet.

Aishwarya Rai Bachchan has been attending the Cannes Film Festival for 20 years, most of them as an ambassador for cosmetics brand L’Oreal. Like her previous years, her daughter her Aaradhya has accompanied her as her husband Abhishek Bachchan.

The Indian contingent at Cannes this year is fairly sizeable – apart from Aishwarya, Deepika Padukone is there as a jury member and also attended the Armageddon Time screening. Actresses Pooja Hegde and Tamannaah Bhatia are also at Cannes as are Hina Khan, Helly Shah, AR Rahman, R Madhavan and other stars.