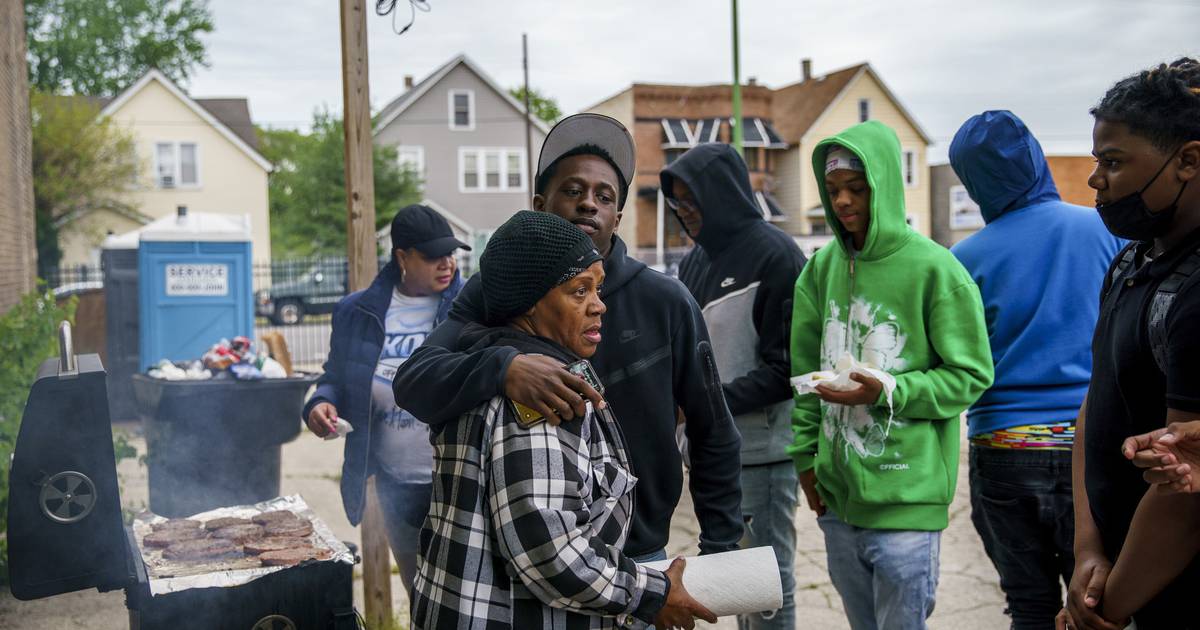 Diane Latiker stood at the entrance of a tent, quieting down the almost 50 youths inside on a cloudy, cold Tuesday afternoon in Roseland.

The Kids Off the Block participants, between 13 and 23 years old, meet every Tuesday and Wednesday afternoon for discussions and leadership training, but Tuesday’s talk hit a little closer to home for some of them.

As the teens got a burger or a hot dog from the grill and a bag of chips, “Ms. Diane” told them the topic of discussion — the violence downtown and the consequences that resulted from it.

Seandell Holliday, 16, of the Roseland neighborhood, was fatally shot near The Bean sculpture on Saturday, May 14.

“How many of you knew Seandell?” Latiker asked the group on Tuesday. Three teens raised their hands.

Naveah Beard, 14, met Seandell in eighth grade but didn’t become his close friend until high school. “He was joyful,” she said.

“He had a lot of siblings, and he was always taking care of them,” Naveah said. “He was a good brother.”

Seandell was a quiet boy who spent most of his time either at home or at school, she said.

“He was an amazing friend and all he wanted to do was make his music,” Naveah said.

Latiker asked the youths for their thoughts on the greatest setting a curfew and announcing that unaccompanied teens would not be allowed in Millennium Park after 6 pm Thursday to Sunday.

“I feel like that’s not right, ’cause it’s not every kid in Chicago that’s doing that,” one boy said.

“It used to not be like that,” someone else said, adding that people posting on social media attract bigger crowds and promote some of the behavior that led to last weekend’s shooting.

“What y’all gonna do about that, though?” Latiker asked them.

“We can show them the good stuff,” one boy said, adding that in the same way social media is used to share “the bad stuff” it can also be used to spread the positive.

The teens said there’s nowhere to go in their neighborhood where they feel safe. Some go to parks, including one of the group’s oldest members, who said he takes his own children to the park during the day. A few of the teens said they go to stores in Roseland to get things they need, but people are always looking at them with suspicion.

They go downtown for the scenery, the movies, to hang out at the mall and go shopping, they said. One teen boy said he goes there for the girls, who are downtown with their friends. Many of the other young men and boys quickly agreed.

Daqwon Hargrove, 18, said it was sad to hear about what happened.

“Downtown is supposed to be the place that everybody’s supposed to, go, chill, relax, get to see the view, all the nice buildings, and just go shopping and have fun,” he said.

Hargrove doesn’t go downtown often, he said. He instead plays basketball, spends most of his time in the gym and preparing for college where he wants to study art, including graphic design and drawing and painting, he said.

He wondered why city leaders chose to crack down on the violence in downtown with the unaccompanied minors rule and a curfew, when violence is happening in their neighborhoods all the time.

He said more programs that youths want to be involved in would help him and his peers feel safer in their communities.

Dayvon Moore, 19, was downtown at the movies the night of May 14 and later went to the Buckingham Fountain. He had seen some of what was happening in Millennium Park and avoided it.

“We just wanted to enjoy ourselves you know,” he said.

“I really feel unsafe all the time to be honest,” Moore said. “I’m a young Black, African American man walking the streets and you know it’s not really safe for us.”