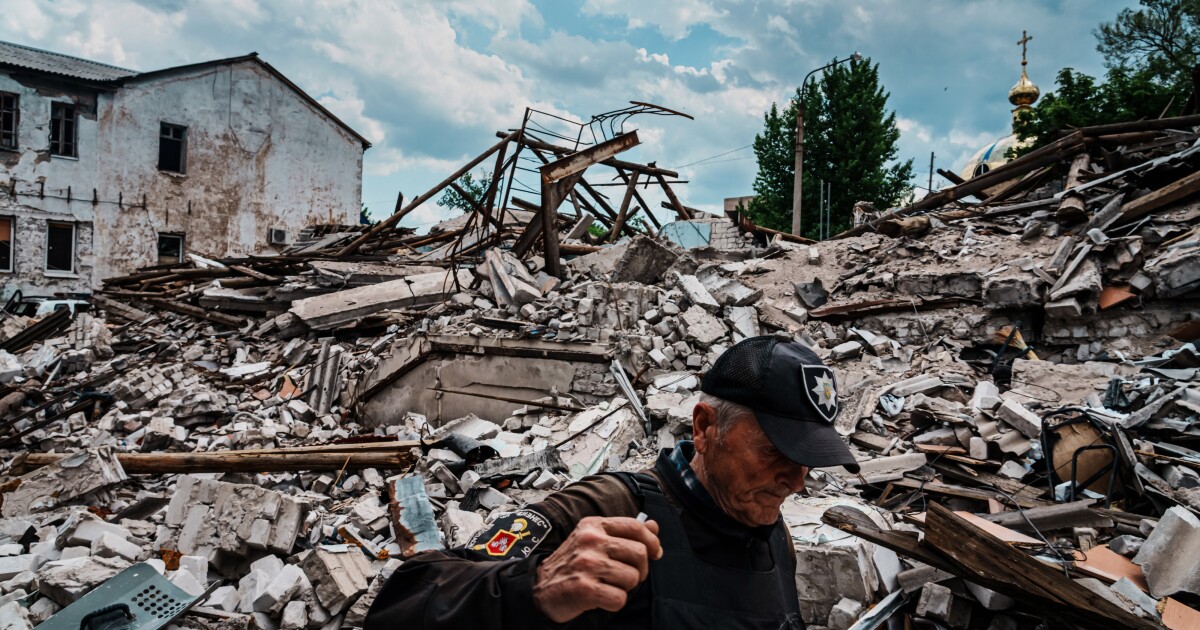 The first shell was the worst, mostly because it came as a surprise. But then the soldiers thought it was OK to get up, dust themselves off. That’s when the second one landed, and Item was the worst. The third one is when they understood they were being hunted and somehow that shelling was now the worst.

Their commander, a breezily confident 31-year-old named Levan, gathered his squad and waited for the bang of outgoing artillery. He made a dash around the corner to the next block, taking cover beneath the trees before sprinting in body armor across a square to an abandoned, brutalist-style apartment building. The Russian barrage was relentless, shells chasing Levan and his men almost to the door.

This is the conflict in Ukraine now: a pitiless artillery war, the kind perhaps not seen since the days of endless trenches and gouged terrain that marked World War I. Less strategy than slugfest, both sides lob barrage and counter-barrage over a see- sawing front line and hope to still be standing when they pulverize the other side into either submission, or at least a crushing withdrawal.

The most ferocious battle is for Severodonetsk and Lysychansk, its sister city across the Seversky Donets River. Russian forces have battered their way to almost full control of the former and prepare for an encirclement of the latter. All three bridges linking the two cities were struck and cannot bear vehicles, in effect trapping 12,000 people in Severodonetsk’s residential areas. At least 500 civilians and hundreds of fighters are bunkered in the city’s Azot chemical plant, authorities say, setting the stage for a rerun of the Azovstal, the industrial complex in the embattled city of Mariupol, where Moscow’s troops maintained a crushing siege on Ukrainian defenders .

In many ways, Severodonetsk’s importance is more symbolic than strategic, unlike Lysychansk, which is on higher ground and would afford those who occupy it a good defensible position. Instead, it represents the last major bastion of the Ukrainian government’s presence in Luhansk, one of the two eastern provinces that are the target of Moscow’s military campaign. But the battle typifies the fight playing out across the mining towns and fecund plains of the country’s eastern Donbas region: The sheer size of Russia’s arsenal favors it in outlasting the Ukrainians, who have so far clung to territory until it’s arguably too late to escape entrapment .

Pockets of street fighting erupt, but there are few close engagements between opposing troops near the cities. Most of the casualties are the result of barrages: In the last three months of the war, 80% to 90% were due to artillery, with the rest caused by bullets, said Oleg Vrolov, a physical training instructor turned army ambulance driver who joined a few days after Russians invaded his hometown of Kherson in February.

He has seen the effects of heavy shelling on the soldiers he evacuates near the front lines: Shrapnel slicing up legs so badly that there was no option but to amputate. Shrapnel in tiny pieces boring through a man’s body. Shrapnel cracking bone.

“It’s my job. I wanted somewhere active,” he said. Yet he acknowledged that his response from him belied the fear he felt when he went to evacuate soldiers from sites near what he called “the zero line.”

“The battles were so crazy that my legs were shaking,” he said. “I want to stay alive, that’s it, but I have to go these places.”

Over his three months of service the battle lines have swung to and fro, but it was still two steps forward one step back in favor of the Russians. Now, they were raining Grad fusillades and 152-millimeter barrages on a checkpoint not three miles from the presumably safe position where Vrolov delivered casualties for emergency care.

A visit to that checkpoint — a handful of policemen and soldiers who challenged motorists passing by before scurrying underground at the shriek of artillery — showed the precariousness of the Ukrainians’ positions.

“Cada dia. Twice a day, four times a day. Then also at night,” said Yevhen, one of the policemen there, adding that the barrage could last one to two hours, sometimes longer.

Sitting beside him in the bunker was Serhei, a 40-year-old policeman: “It got worse in the last week. It’s like Disneyland here, ”he joked, a tired smile on his face.

Some of the heaviest fighting was farther down the P66 highway, where Ukrainian forces continue to mount a defense of Lysychansk’s southeastern flank at a terrible cost.

“The corpses, the smell of rotting flesh, it’s everywhere. There’s shelling and shooting from all sides, and the Russians — they’re advancing a little more every day,” said Ahmad Akhmedov, a Dagestani commander deployed alongside Ukrainian troops near the village of Toshkivka, roughly 12 miles southeast of Lysychansk. He looked exhausted, his face made older by fatigue and perhaps the loss of too many comrades — as many as 30 a day, he said.

Ukrainian officials estimate anywhere from 100 to 200 soldiers are killed every day. That could amount to as many as 6,000 per month, with multiples of that wounded. Analysts estimate Russia has lost 10,000 troops since the beginning of the war.

Ukrainians who survive the charnel house are withered, their morale sapped by the constant explosions. Reinforcements aren’t arriving often enough and, in any case, they often appear with little training.

“Our soldiers are fighting all the time, but they’re tired. They haven’t left the trenches for months,” Akhmedov said.

Nevertheless, many of the fighters and officials interviewed in Lysychansk and its environs bristled at the notion of ceding territory. They suggested that despite pledges, Western nations have been reluctant to hand over weapons even as they urge Kyiv to consider ceding territory to bring about a cease-fire.

The men here weren’t too concerned with the larger politics at play, but they were unanimous in calling for additional weapons, especially long-range multiple-launch rocket systems (or MLRS) and Western artillery systems that could knock out targets at 300 miles away

“We don’t need 4 HIMARS. We need a thousand,” Serhei said, referring to the high mobility artillery rocket systems, which the US recently provided to Ukrainian troops.

Washington this week pledged an additional $1 billion in military assistance to Ukraine, including more rounds for the HIMARS. But Chairman of the Joint Chiefs of Staff Gen. Mark A. Milley warned that the HIMARS weren’t a “silver bullet.”

“No weapon system — singular weapon system ever ‘turns the balance,’ ” he said at a news conference in Brussels on Wednesday. Still, he lauded the Ukrainians for inflicting what he said was a 20% to 30% loss on Russia’s armored force. Open-source experts say Russia has lost about 1,000 tanks.

Milley pushed back on the notion of an inevitable Russian takeover of the Donbas, pointing to Severodonetsk as a place where the Ukrainians are fighting the Russians “street by street, house by house, and it’s not a done deal.”

“There are no inevitabilities in war,” he said.

But he acknowledged that the “numbers clearly favor the Russians…. In terms of artillery, they do outnumber, they outgun and outrange.”

Yet it seemed clear all over Lysychansk that the Ukrainians were suffering major losses. Strewn around its neighborhoods, or nestled among its hiking trails, are the burnt-out carcasses of armored vehicles, antitank guns and at least one pontoon-bridging truck, all knocked out of commission by Russian artillery fire, residents said. Buildings where Ukrainian troops had been bunkered were perforated by shrapnel from Grad rockets, their fuselage and fins still sticking out of the asphalt.

From the screen of a drone flown by a Ukrainian soldier tasked with giving targeting coordinates over Severodonetsk, the effect of the artillery duel appeared like a cancer, bashing whatever is in its path into a pixelated version of what it was. Up close, everything seems scorched and ground down to a palette of black, dark gray and gray. The only splashes of color comes from the occasional children’s toy or fluorescent police vest still pristine among the ruins.

That cancer is slowly spreading to Donetsk province as the footprint of the war gets larger. The main highway from Lysychansk to Bakhmut, a city in Donetsk province about 30 miles to the southwest, was already a Russian free-fire zone a month ago, forcing residents and resupply convoys to take a back-country path to the area.

But the signs of the ferocious fight taking place all around it have begun to appear there too. Roads are increasingly cratered. A short drive from Bakhmut on Tuesday was the still-smoking wreckage of three mud-and-brick houses, all felled by the explosive power of one strike. The next day, a few miles before, hulking Kozak light-armored vehicles, Kamaz military trucks, ambulances and Soviet-era clunkers navigated past the shell of a Ukrainian armored personnel carrier: It blew up sometime overnight, spilling oil, chunks of metal and tattered belongings over the two-lane road.

At one point, what looked like a Ukrainian Mi-17 helicopter flew low, hugging a line of poplar trees to avoid detection; a trick of perspective made it look like a fat bee flying by a green field of wheat.

Even as the fight to encircle Severodonetsk raged on, it appeared that Lysychansk was on borrowed time. Soldiers flagged cars driving down the P66 highway, warning motorists of heavy shelling near the main checkpoint out of the city.

“When the shelling stops, you have three minutes before it starts again,” one of them said. Behind him was a percussive beat of a battle about 10 miles into the forests south of the city, punctuated by the sustained bursts of machine guns from helicopter gunships.

“Now you can go,” said another. The driver didn’t hesitate, the engine straining as the van barreled down the highway. He stared ahead, silent, waiting for the sound that meant his luck had run out.