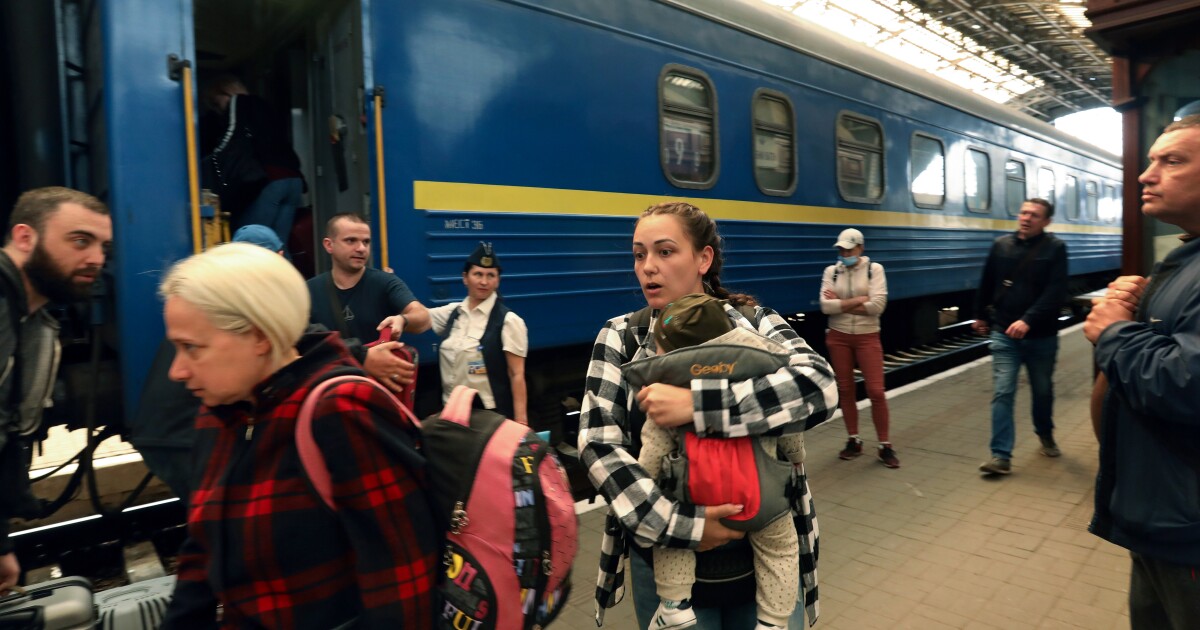 As the departure time neared, the last arriving passengers raced to catch the 2:30 pm train out of Dnipro. Their goal was to reach Lviv to the west and, they hoped, safety. The journey would take 22 hours.

A man dressed in military fatigues and carrying a backpack and bedroll struggled to find the electronic ticket on his phone. Three train attendants dressed in freshly pressed uniforms patiently tried to help.

Francis Dion, a 32-year-old soldier from Montreal who volunteered to fight for Ukraine, was headed to Lviv for lighter duty.

Across the platform, a dog was running loose on the train tracks, his leash trailing behind him. Elmira Andriiko of Dnipro was leaving home with two dogs, Archie and Lika. Once Archie was retrieved, they boarded the train and settled into the economy class.

Andriiko planned to stay in Germany until the war is over and hoped to find work there as a dog groomer, her profession. Archie, a 7-year-old mini-Yorkshire terrier, was freshly trimmed for the long trip ahead.

As the train pulled out of the station, screeching wheels drowned out the sound of a cat meowing unhappily. Tatiana Zaparoshytz, who has worked as a train attendant for two years, was taking care of the cat that was on its way to rejoin its owner in Lviv. It quieted down once the locomotive was in motion.

Many passengers, it seemed, also quieted down once the train finally set off. They were anxious but relieved as they recounted what they had seen since the Russians invaded and what they left behind.

Two cars over, Marina Bogdanova and her children, Fedor, 7, and Margo, 11, were settling in for the long trip. Bogdanova left home without her husband because men have to stay to fight. Margo and Fedor were in one bunk playing with the dolls the former had brought along.

“We got a sponsor family in the UK so we are going to Lviv,” Bogdanova said. From there, they hope to make their way to England.

“My children weren’t safe in Dnipro,” she said. “It’s stressful. The schools aren’t in session; some are being used as shelters. I hope my children will be able to study in England.”

Within an hour, Fedor and Margo had made friends with other children on board — also headed to the UK with their mother — and were playing in the narrow hallway.

Out the window were scenes at odds with a nation at war. Tractors plowed the fields. Horses grazed on grass and a deer trotted off at the sound of the approaching train. White-blossomed trees streaked by, brightening up the otherwise dreary day. Men stood by the windows, talking on cellphones and smoking.

Archie, the 8-pound terrier, was off his leash, visiting other passengers in his train car, cheering them up, including the Salosalova family from the besieged port city of Mariupol.

Katia Salosalova, 38, a teacher, and her husband, Sergie, 35, a steelworker, escaped Mariupol on April 21 with their little boy. They were continuing their way to the west of Ukraine. In Mariupol, “there’s no water, no gas, no food, no nothing,” she said. “You can’t live there. We left very quickly, during a green corridor. We hope to go back.”

Also from a front-line town were two 27-year-olds, Yaroslav Boriskin and his girlfriend, Diana (who didn’t want her last name used). They passed the time on her computer. Life in Kharkiv, a city in Ukraine’s northeast, had become unbearable, so they had fled with their black cat, Asya.

“We had to leave our apartment because it was damaged by shelling at the beginning of the war,” said Boriskin, an information technology specialist by trade. “The windows were blown out and there was no heat, so the water pipes burst.” Firemen had to break into the apartment, which was accessible only from the roof.

“We’ve been living at a friend’s place but found an apartment in Lviv,” Boriskin said. “Kharkiv isn’t in the best condition, thanks to our neighbors,” he said, in a sarcastic reference to the Russian invaders.

Diana is originally from Mariupol. She said the apartment where she grew up was heavily damaged by fire and a building nearby was destroyed. She saw it on the news.

Her parents, rather than head west, went east and are living with her uncle in Russia now, but they may be able to go to the European Union at some point. Boriskin’s parents are in Russian-controlled territory near Kherson, in southern Ukraine. Asked how long he and Diana planned to stay in Lviv, he said: “Maybe a couple of months, maybe a year, maybe forever. Who knows?

Dion, the foreign fighter, was catching up on rest on a narrow cot in coach. He had gotten out of the Canadian military just before Christmas, after serving 12 years.

When Ukrainian President Volodymyr Zelensky “called for foreign fighters to join on Feb. 28th at 8 am, I was on a plane that night at 6 pm,” he said. “It was crazy to me that the entire world turned their back on Ukraine. They said, ‘Sorry, it’s too bad you aren’t part of NATO. You’re on your own. Russia is the second world power.’ I couldn’t just watch what was happening,” he said.

“I didn’t tell my parents,” he added. “Not until I got to Ukraine. They were devastated. They begged me to come home. I saw more action in six weeks on the front than I did in 12 years in the Canadian military.”

Nicknamed Shadow by his comrades, he took part in the battle in Irpin, northwest of Kyiv, the capital, which he described as urban warfare. When the Russians retreated, he was sent to the eastern front, where the fighting was far different. He could see the Russians through binoculars.

There was another Canadian fighting in the same unit, a sniper, named Waly. Just a couple of days ago, the two of them were on a mission with two Ukrainian soldiers when Russians fired on their position. Waly and Francis survived, but the two Ukrainians, who were outside the trench, were killed instantly.

He planned to stay in Ukraine for a while longer but wants to go home before September, when his girlfriend is expecting a baby. I have no regrets. “I did my part,” he said. “I wouldn’t change anything. I couldn’t stay home.”

As the evening drew near, the sun broke through the clouds and lighted up the gold-leafed Orthodox churches that dot the landscape. Women were in their gardens pruning, people riding their bicycles home from town with groceries. People waved as the train passed by. The rumble of the locomotive was a welcome change from the sound of sirens back in Dnipro.

There is no meal service on the 20-hour overnight train to Lviv. But an attendant brought me a packaged sandwich, the kind you see at 7-Eleven, triangular in shape. Next to the attendant’s compartment is a hot water boiler available for use by those who brought their own coffee or tea. The train is old, but well maintained, with fresh sheets and a cotton towel provided in first class. It’s not a bullet train, but it moves along steadily, swaying side to side. (The newer trains were taken out of service because of the war.)

Curfew in Dnipro is 10 pm, but on the train, there isn’t much to do once the sun goes down. Black plastic hangs on the windows to prevent light from escaping at night and giving away the train’s position to the enemy. After the bombing of the train station at Kramatorsk, everyone lowered the shades in their cabins for the same reason. There was an eeriness to the darkness outside the window.

The train slowed to a stop for no apparent reason, then minutes later another train passed on the next track over, headed east, possibly carrying tanks and ammunition to the front. Once it passed, the train slowly began to move again.

The morning dragged on as the train made long stops, again for no apparent reason. Some people tried to sleep the extra hours away, while others wandered the hallways. It was only explained later that trains are required to stop when the aerial bombing warnings are in effect.

When the train finally crawled to a stop in Lviv, the passengers disembarked with their pets and bags in tow, some again anxious, some relieved, some a little of both. A man walked down the platform crossing his heart from him, giving thanks for safe passage. For many of the other passengers, the 22-hour train ride was only the beginning of their journey.