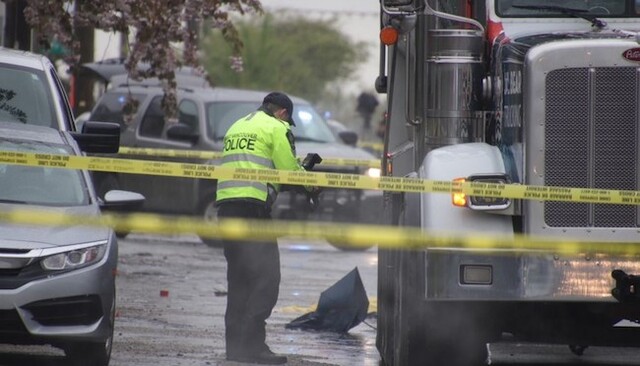 Residents of a Burnaby neighborhood are in shock after a 14-year-old girl was struck and killed Wednesday afternoon.

The pedestrian was struck by a dump truck while walking on 11th Avenue near 16th Avenue at around 3:30 pm, said police. A crumpled umbrella can be seen lying next to a body that was covered by a tarp. Residents looked shaken as they watched police take photos at the scene.

The driver of the commercial vehicle, a dump truck pulling a dump trailer, remained on scene and is cooperating with the investigation, said police in a news release.

“We understand a tragic incident like this will be felt widely throughout the community. Burnaby RCMP is looking at ways to support those impacted by this tragic death. Our Victim Services Unit is also engaged and offering support to those affected,” said Cpl. Brett Cunningham in a statement.

Driver impairment is not believed to be a contributing factor, said police.

Police are asking anyone who may have witnessed this collision or who may have dash-cam video from the area of ​​11th Avenue between 18th Street and 15th Street from 3 pm to 4 pm to contact the Burnaby RCMP at 604-646-9999.

The residential neighborhood is located next to an area that contains several light manufacturing companies, plus warehouses. It is located just north of the busy 10th Avenue road.